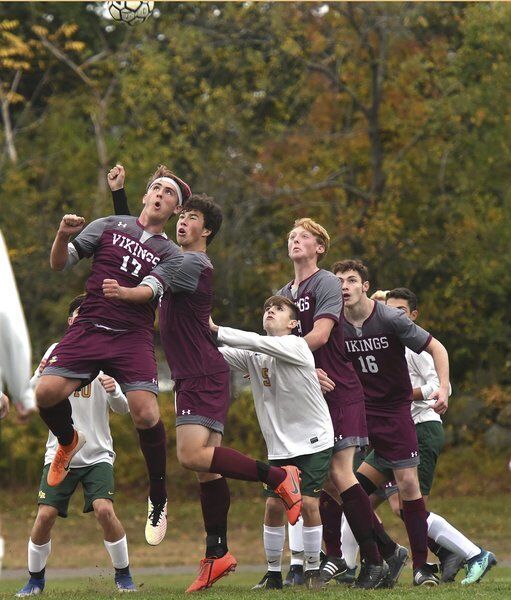 PAUL BILODEAU/Staff photoThe Rockport School Committee approved fall sports on Wednesday, but games such as soccer will look a lot different as social distancing rules will eliminate plays like this where players are bunched up. 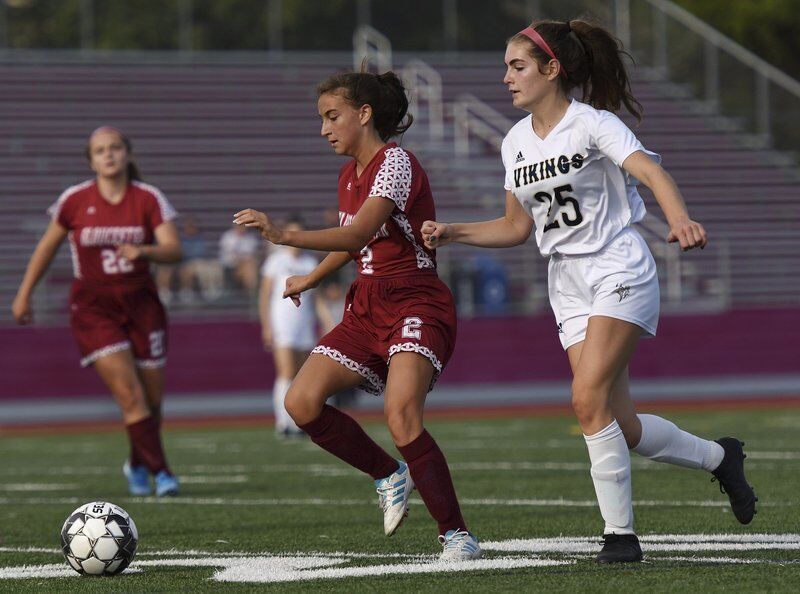 PAUL BILODEAU/Staff photoThe Rockport School Committee approved fall sports on Wednesday, but games such as soccer will look a lot different as social distancing rules will eliminate plays like this where players are bunched up.

One Cape Ann high school received some clarity on its fall sports season while another will have to wait a week for an answer after a pair of school committee meetings on Wednesday night.

The Gloucester School Committee decided to table the vote on whether to play fall sports during the fall season (September through late November) as opposed to the 'Fall 2' season, which begins preseason in late February. Northeastern Conference principals voted 9-0-3 last month to recommend that schools play in the Fall 2 season while the coronavirus pandemic was ongoing. Tuesday's discussion was to reconsider that decision and allow Gloucester student-athletes this fall.

The vote is now expected to take place on Wednesday, September 16.

Neighboring Rockport became the fourth Cape Ann League school to approve fall sports. The Rockport School Committee voted 5-0 Wednesday in favor of participation, contingent on the Board of Health signing off at its meeting Thursday.

The vote made Rockport the first CAL district using a remote learning model to give fall sports the green light. Rockport joins Newburyport, Hamilton-Wenham and Lynnfield, all of which are using hybrid learning models and signaled their intention to play over the past week.

Manchester Essex is expected to present to its school committee on Tuesday, Sept. 15.

During his presentation to the school committee, Rockport High athletic director John Parisi laid out several key points of the CAL’s plan. He confirmed that the league intends to play 10-game fall schedules in which every team in the league plays each other once; that the field hockey and soccer teams will practice in cohorts to ensure athletes stay in small groups throughout the season; and that practice times will be limited to two hours or less.

In terms of game day protocols, Parisi said buses will have designated drop-off points. He also stated that opposing teams will likely each have their own side of the field in order to allow sufficient room to spread out. Teams will also distribute rosters that include the contact info for each athlete to help facilitate contact tracing, and fans will not be allowed at games for at least the start of the season.

“When we have fans come to games, that creates a whole other issue with contact tracing,” Parisi said. “As a league we decided it’s just easier to get the ball rolling, see how it goes for the first week or two and reevaluate after that.”

Parisi said he’d also spoken to his fall captains, who understand the importance of following the safety protocols and recognize that violations could mean the end of their seasons.

In Gloucester, Athletic Director Bryan Lafata laid out the pros and cons of playing in 'Fall 1' and 'Fall 2' during his proposal. The pros for Fall 1 included playing during the fall's normal time frame and creating a sense of normalcy for the student-athletes, much better weather than the Fall 2 season, better field conditions, and the chance for students to play four sports in a school year.

The cons included the potential that not all NEC teams could not participate due to COVID-19 numbers in their cities (currently affecting Winthrop, Lynn Classical and Lynn English), that there would be no MIAA state tournament this fall, and strict safety restrictions for each sport.

Unlike the Cape Ann League, the Northeastern Conference principals recommended play in Fall 2 in a vote last month, so Lafata did not have a conference schedule or plan to share. Gloucester principal James Cook was one of the three votes to abstain (along with Beverly and Danvers), which he and Lafata confirmed at Wednesday's meeting.

"The general thought was the conference would stick together, with five schools in the red designation at the time," Lafata said. "Since the vote, many discussions were held and it was decided to re-evaluate the situation through the school committee. Only three schools are in the red classification right now, and the weather in Fall 2 is a cause for concern because we're moving outdoor sports."

The MIAA released its safety restrictions for the moderate level contact sports last month. Soccer will undergo drastic changes, including no headers and no bunching on free kicks. Field hockey will be played 7-on-7 to make it easier to social distance on the field.

Gloucester School Committee members and Mayor Sefatia Romeo Theken requested a more detailed plan from the athletic department and consultation with Gloucester's Board of Health before putting the issue to a vote. On the state level, the MIAA consulted with state health officials.

"I don't want to stop anything from happening and I'm not against sports, but there are concerns," Romeo Theken said at the Wednesday meeting. "We need to talk to the Board of Health, and we need a plan for transportation."

Transportation was a big point of contention in Wednesday's meeting. Due to COVID-19, the number of students on a school bus is restricted, meaning athletic teams traveling to an away game may need extra buses as varsity and junior varsity teams will no longer be allowed to travel together.

"This will always have my support, but transportation is my biggest concern and something we need to figure out," School Committee member Melissa Teixeira Prince said. "We are financially strapped and may need to have some sort of expectation that there will be help with transportation. I want to see how other districts are handling this and if we need to get assistance from the parents."

Essex, MA - Karen E. Osborne (Christenson), 82, passed away on September 22, 2020. She was born in Gloucester to Clifton and Lily (Langwa) Christenson. Karen was a longtime resident of Essex and Hamilton and lived in Ipswich prior to returning to Essex to be with family. She was a graduate o…