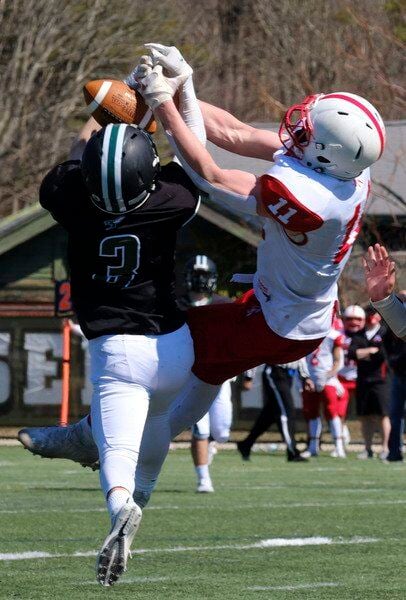 Kirk R. Williamson PhotoManchester Essex's Jesse Oliver breakups knocks a pass away from Amesbury Kyle Donovan in last Saturday's game at Hyland Field. Oliver and the Hornets are 1-2 at the midway point of the season. 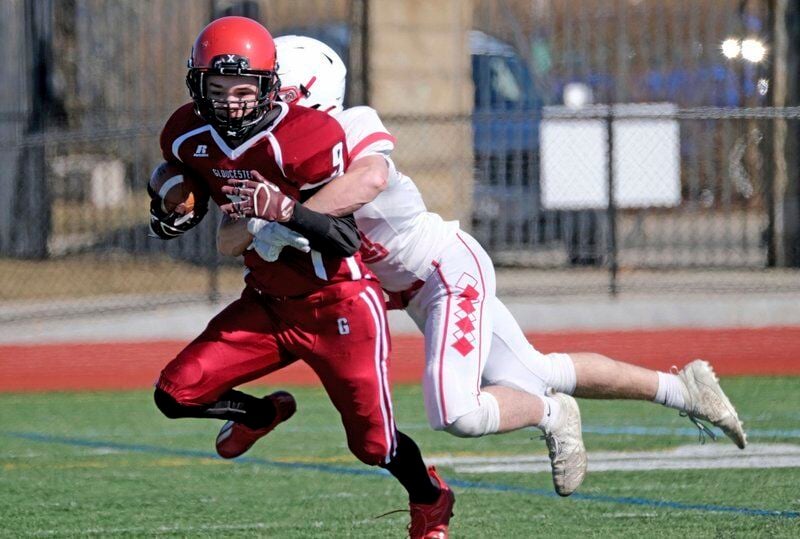 Gloucester's Aiden Cornetta is brought down by a Saugus player as he tries to round the end in the second quarter during their game at Newell Stadium Saturday afternoon. KIRK R. WILLIAMSON/ photo. 3/13/21 [[MER2103131535060014]]

Kirk R. Williamson PhotoManchester Essex's Jesse Oliver breakups knocks a pass away from Amesbury Kyle Donovan in last Saturday's game at Hyland Field. Oliver and the Hornets are 1-2 at the midway point of the season.

Gloucester's Aiden Cornetta is brought down by a Saugus player as he tries to round the end in the second quarter during their game at Newell Stadium Saturday afternoon. KIRK R. WILLIAMSON/ photo. 3/13/21 [[MER2103131535060014]]

The high school football season is only three weeks old, yet it is already racing towards its midpoint.

Gloucester has four games remaining after a hot, 3-0 start while Manchester Essex (1-2) is right at the midpoint of its six game season.

Both teams have delivered some highlights over the first half of the regular season, here's a look at some of the best.

Coming off of a 1-10 campaign in 2019, it was important for the program to take a clear step in the right direction this season. After three games, it's already apparent that the program has done just that.

Gloucester is 3-0 and has already multiplied its win total from 2019 by three. If that weren't enough, Gloucester has already scored more points in three games this season (94) than it did in 11 games during the 2019 campaign (76).

The Fishermen have taken a step forward in every facet of the game this season and it has shown in the results. Now we get to see just how much they've improved over the last month as their final four games against Beverly, Winthrop, Peabody and Danvers, are the four toughest games on the "Fall 2" slate.

Both the Gloucester and Manchester Essex defenses have been team strengths through the first three weeks.

The Fishermen have been stifling opposing offenses, allowing 40 points in three games. That number, however, does not tell the entire story as Gloucester's starting defense has only allowed 20 points this season with Tech Boston scoring 20 points in the fourth quarter against Gloucester's backups last week.

Manchester Essex has really turned up the defensive execution over the last two weeks. After a tough opener against North Reading where they allowed 33 points, the Hornets have allowed just 18 points in the last two games, a win over Triton and an 8-0 loss to Amesbury.

In both of those games, the Manchester Essex defense was physical and did not miss many tackles. Senior linebacker Gavin Glass has made plays all over the field against both the run and the pass. Will Levendusky and A.J. Pallazola have led the secondary while Joe Daly has also played well at linebacker.

The Fishermen have been relying heavily on their sophomore class and several of them are off to great starts to the season.

Gloucester's two leading rushers in Frank DeSisto (376 yards) and Caleb DeCoste (185 yards) come from the sophomore class and have formed a more than formidable rushing duo that complement each other perfectly. DeCoste is the grinder in between the tackles, softening up the defense to pick up tough yards. DeSisto, on the other hand, is the big play threat as he has broken off a touchdown run of at least 55-yards in each of the first three games.

DelTorchio has been one of Gloucester's most consistent two-way players at tight end and defensive end. He can block and split out wide to catch passes at tight end as he uses his 6-foot-3 frame to his advantage. That size also comes in handy on defense has he can rusher the passer and stuff the run.

Bryan Swain has also emerged on Gloucester's offensive line. He did not play football as a freshman but came out for the team this year and immediately saw himself starting on the offensive line. He has been a rock at the strong tackle spot, opening holes for some of DeSisto's biggest gains.

The Hornets have taken a few lumps early in the season, especially along the lines where they lack experience. But the team showed a lot last week in an 8-0 loss to Amesbury.

The Indians are a team that makes no secret about the way they want to play, which is physical, three-yards and a cloud of dust football. Manchester Essex more than passed the physical test last week, dishing out as many shots as it took but ultimately allowing a fourth quarter touchdown in a narrow defeat.

The Hornets will be seeing a few more physical teams in the coming weeks, although this week's opponent, Lynnfield, is more of a spread you out type of squad. Knowing they can handle a hard hitting contest will bode well for the Hornets' chances in the future.