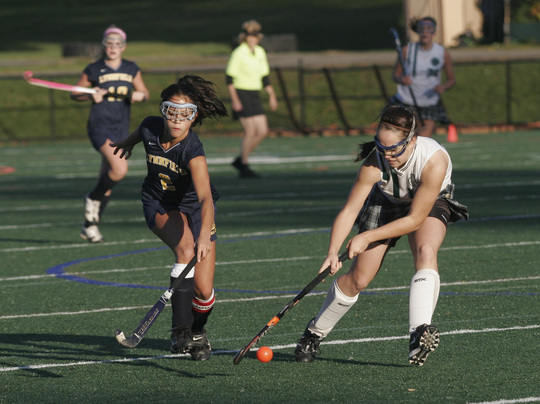 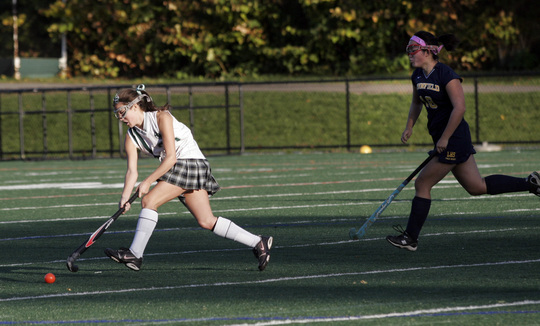 MANCHESTER — The Manchester Essex field hockey team likes their success to be measured on how they perform in the biggest games. The Hornets have set their expectations high this season, with the goal being a Division 2 state championship.

If big games are how the Hornets want to be graded, they passed with flying colors after yesterday's 5-1 drubbing of Lynnfield at Ed Field Field. The Hornets improved their record to 15-0-1 with the win and are just one victory shy of clinching the Cape Ann League Small title. Lynnfield fell to 11-2-2 with the loss, both of its losses came at the hands of Manchester Essex.

The Hornets best games this season have come in their biggest games. Against the top four teams in the Cape Ann League other than themselves (Lynnfield, North Andover, Wilmington and Masconomet), the Hornets are 5-0 and have outscored those teams 15-1 in those games.

"We have a lot to get up for in the big games," said Hornets tri-captain Amelia Cohen, who had a goal and two assists in yesterday's win. "We get really pumped throughout the school day and it carries over to the field."

"Sometimes as a coach you don't know what to expect from your team," Grant said. "But I'm never worried when it comes to the big games. The girls have been there before and they know what it takes to win these big games. They are just so motivated to win."

The Hornets showed off all of their qualities that make them one of the top teams in Division 2. Five different players scored goals for Manchester Essex, while the defense was sharp. Goalie Vicki Grimes made eight saves in goal. The Hornets defense was praised by Grant for neutralizing Lynnfield's Meriam Gehret, one of the most dangerous scorers in the conference.

"This was our biggest game of the year and one of our best games of the year," Cohen said. "Our stick work was great, our defense was great and we scored when we got the opportunity."

Manchester Essex got the scoring started midway through the first half when tri-captain Amelia Burke put home a loose ball in front of the Pioneer net. Four minutes later tri-captain Katie Gavin put home a pass from Cohen to make it 2-0 at the half.

The second half ended up being much like the first as Cohen scored on a pass from Burke early to make it 3-0. On the goal, Burke stick-handled through the entire Lynnfield defense and put her pass right on Cohen's stick, who then finished the job. The highlight reel pass and goal energized the Hornets even more than they already were.

"That was an unbelievable goal," Grant said. "The two of them work so well together and they have made some great plays this year."

Kyle Marsh made it 4-0 when she put home a pass from Cohen and Gavin midway through the third while Olivia Dumont added a late goal on a penalty stroke to make it 5-1 after Lynnfield got a goal of its own.

Grant credited the play of her entire team, particularly her forwards. Not only did they score five goals but they did a little extra work. The Pioneers like to play with three forwards looking to start an odd man rush, so the forwards had to pick up slack on the defensive end as the Hornets defenders played deeper down the field than they usually do according to Grant.

"The forwards worked so hard," Grant said. "Their second effort was amazing, every time they lost the ball they would get it back themselves. They also did a great job helping out defensively, they had a lot of extra work to do today and they were awesome."

Essex, MA - Karen E. Osborne (Christenson), 82, passed away on September 22, 2020. She was born in Gloucester to Clifton and Lily (Langwa) Christenson. Karen was a longtime resident of Essex and Hamilton and lived in Ipswich prior to returning to Essex to be with family. She was a graduate o…