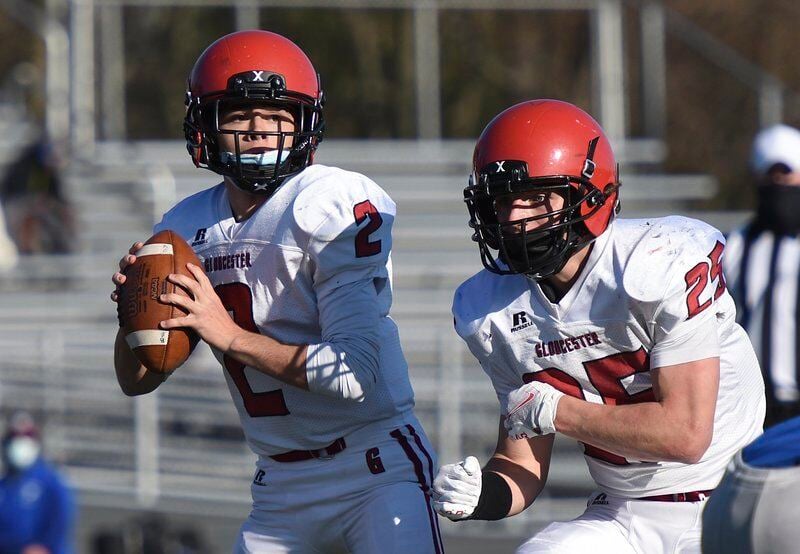 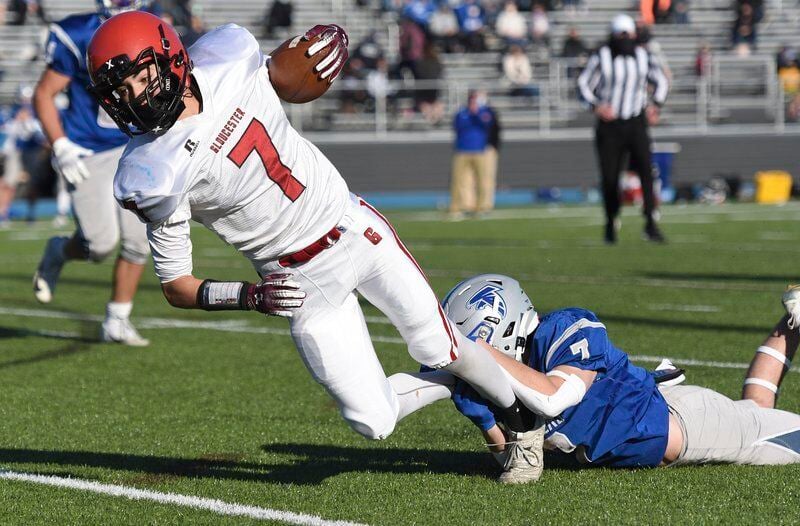 PAUL BILODEAU/Staff photo. Gloucester's Robert Schuster is brought down by Danvers' Andrew Metivier as he fights for extra yards in Friday's game at Deering Stadium. 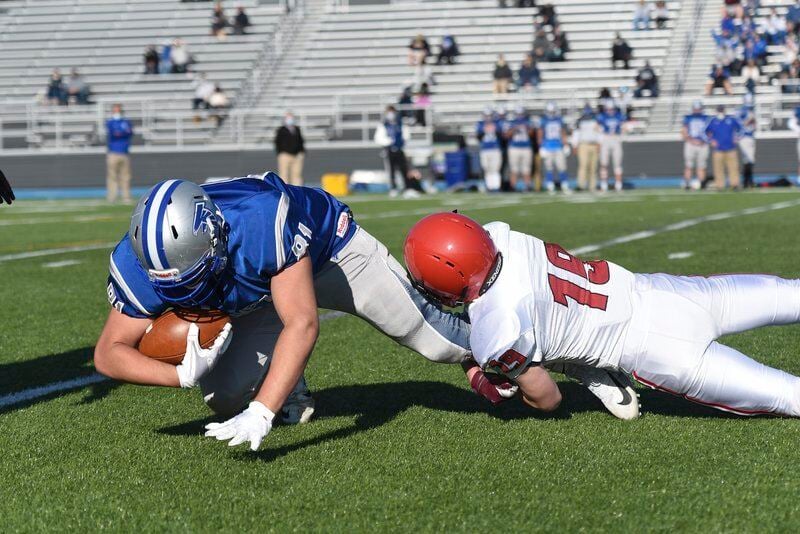 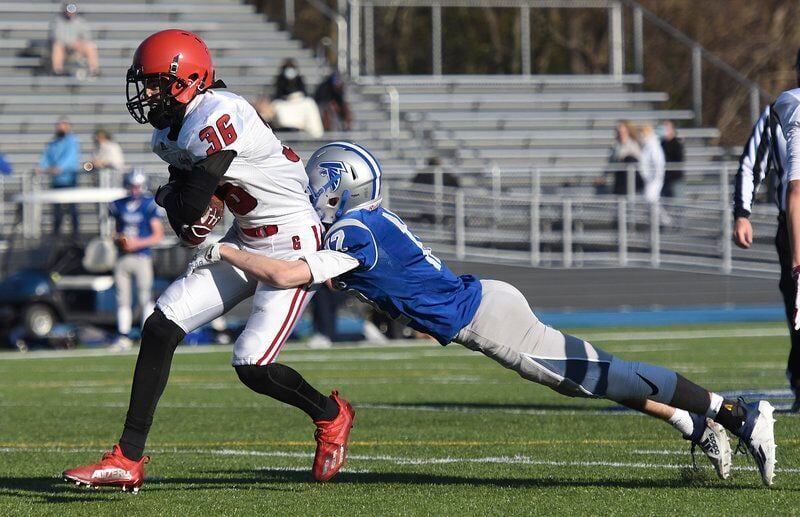 PAUL BILODEAU/Staff photoAidan Cornetta was a passing and rushing threat for Gloucester this season. 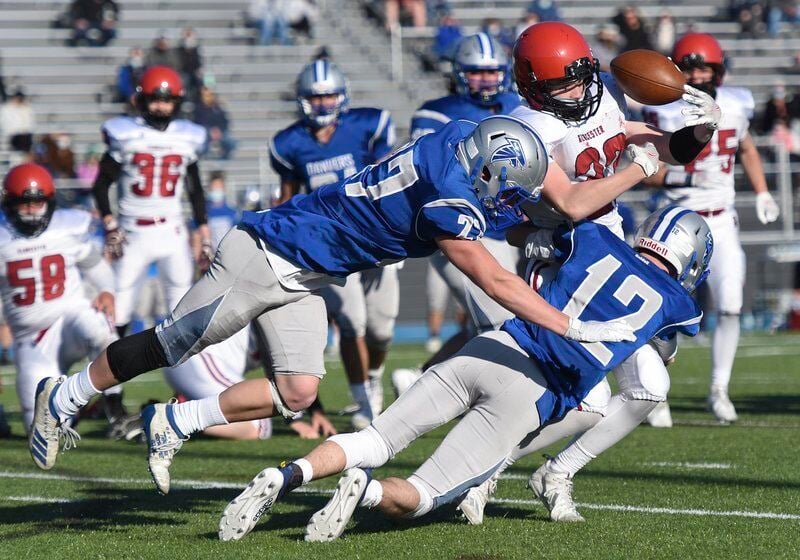 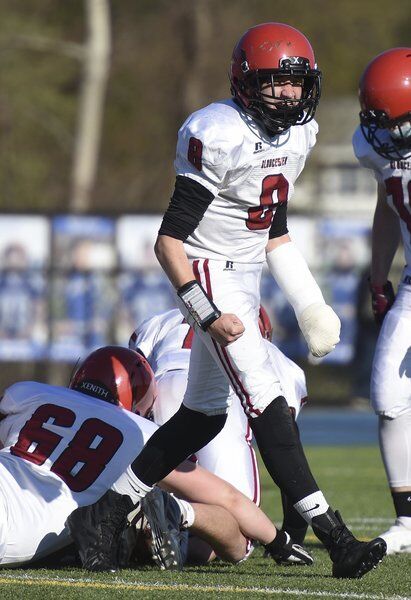 PAUL BILODEAU/Staff photo. Gloucester's Robert Schuster is brought down by Danvers' Andrew Metivier as he fights for extra yards in Friday's game at Deering Stadium.

PAUL BILODEAU/Staff photoAidan Cornetta was a passing and rushing threat for Gloucester this season.

DANVERS-- The Danvers football team did something it had not done in nearly five decades on Friday night against Gloucester.

The Falcons handled the Fishermen in every facet of the game to the tune of a 42-8 victory at Deering Stadium. The win was Danvers' third straight over Gloucester and the first time it has beaten Gloucester three straight times dating back to Thanksgiving morning from 1971-73.

"We were happy with the way we played and the way we finished the season," said Danvers head coach Ryan Nolan, whose team finishes the season at 3-4 with its second straight win. "We had a lot of good efforts today, especially from our seniors. It was a good way to go out."

As for the Fishermen, they were feeling a little worn down in the final week of the season, especially with a depleted lineup with several players out due to injury.

"We asked a lot out of our top guys the last few weeks and even though it's only a seven week season it wears on you," said Gloucester head coach Dan O'Connor, whose team finishes up at 3-4 after its fourth straight loss. "Especially when we're playing another physical team like Danvers. We competed, we just didn't have enough to match them."

Danvers set the tone from the jump, racing out to an early lead with 9:20 of possession and 17 plays to Gloucester's three in the first quarter. The Falcons scored a touchdown on their first six possessions and the only time they did not score was kneeling in victory formation to close out the game.

Danvers dominated up front and found most of its yards rushing while sprinkling in the pass at opportune times.

The running back duo of Peter Rivera and Brad Wilichoski did some serious damage to the Gloucester defense. Rivera had a monster game with 191 yards and two touchdowns on just 14 carries while Wilichoski earned tough yards in between the tackles with 59 yards and three touchdowns on 13 carries.

Wilichoski paced the Falcons to a 15-0 lead early in the second frame on a pair of one-yard touchdown runs, one to cap off an 11-play, 6:17 opening drive and the other capping off a 13-play 85-yard, 7:01 drive. He added the two-point conversion after his second score.

Gloucester had its best chance to get back into the game on the ensuing drive as a big catch from Robbie Schuster on fourth down got the offense into the red zone. But the Falcons defense held on a 4th-and-2 from the 14, stopping the Fishermen for no gain.

Rivera took over from there as his 40-yard score gave the Falcons a 22-0 lead at the half.

Gloucester then answered when senior quarterback Brett Gaipo found a wide open Chase Goulart behind the Danvers secondary for a 27-yard score. Robbie Schuster added the conversion to cut the deficit to 29-8.

The Falcons, however, took the momentum right back as Wilichoski plowed in from two-yards out to extend the lead to 36-8 after one. Rivera added an 18-yard score in the fourth to cap the scoring.

"I was really happy to see Pete Rivera do what he did in his last game," Nolan said. "He's battled some injuries this season but he's been working all yer and had a great game tonight. Drew Gray too, a four-year guy that has earned his playing time and he got a touchdown in his last game."