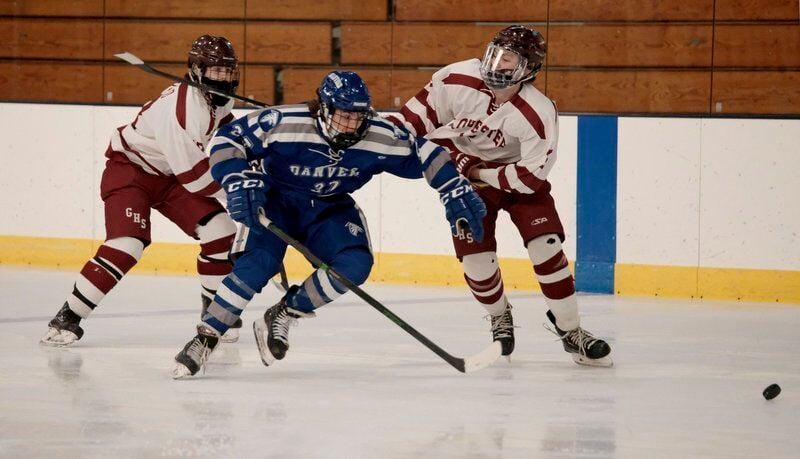 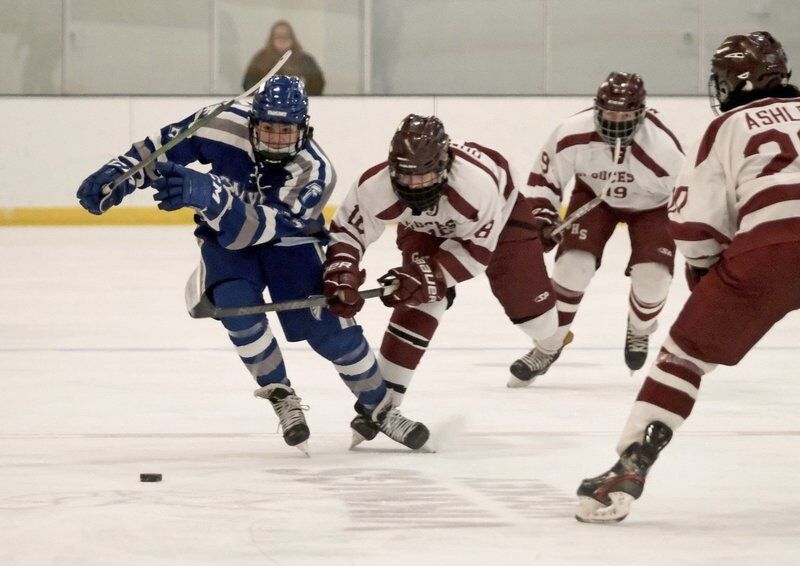 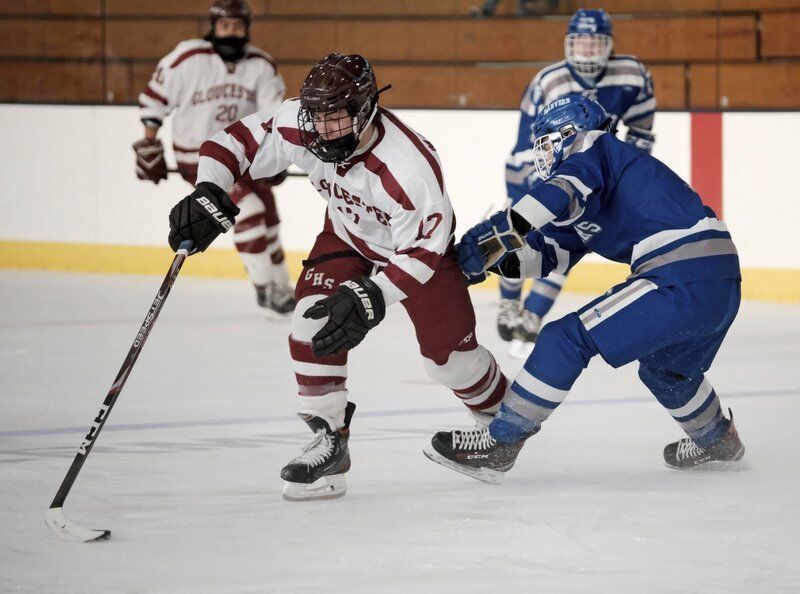 Kirk R. Williamson PhotoGloucester's Emerson Marshall cuts to the middle of the ice past Danvers' Dillon Driscoll in Sunday's game at Talbot Rink. 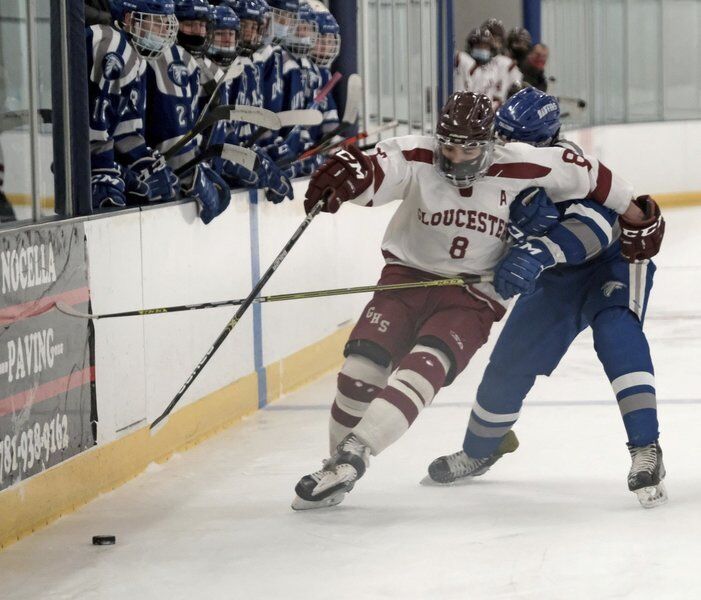 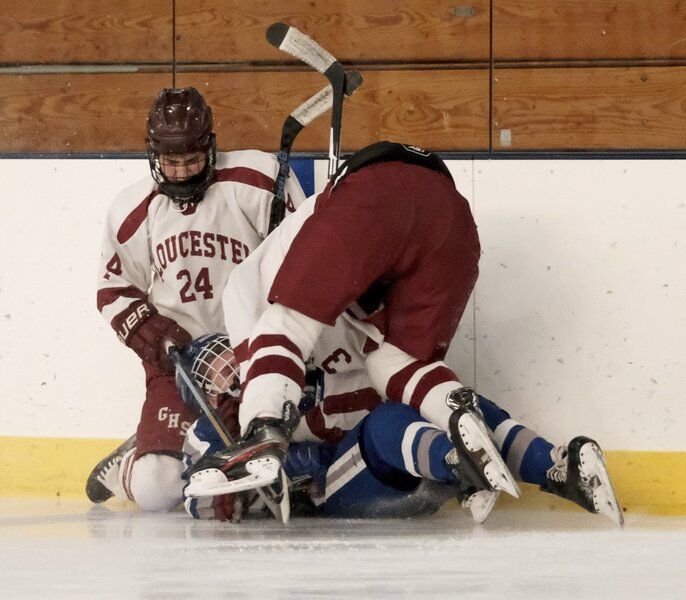 Kirk R. Williamson PhotoDanvers' Aidan Lanphere is sandwiched between Gloucester's Zach Morris and Ryan Frates in a battle for the puck along the boards during Sunday's game at Talbot Rink. 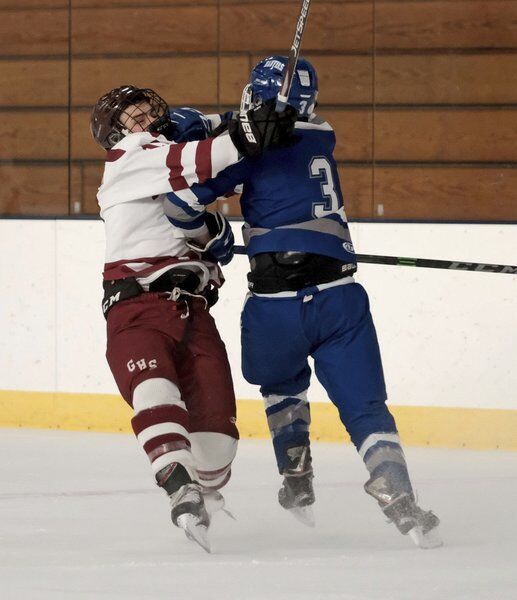 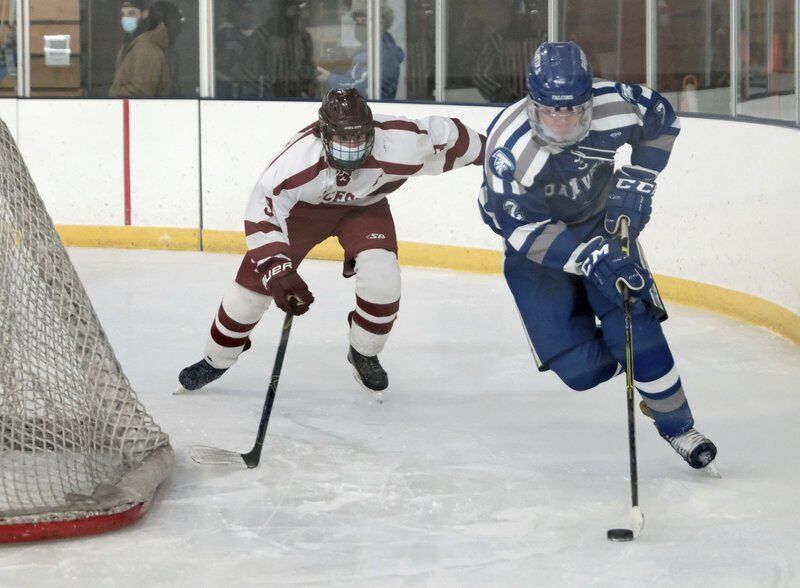 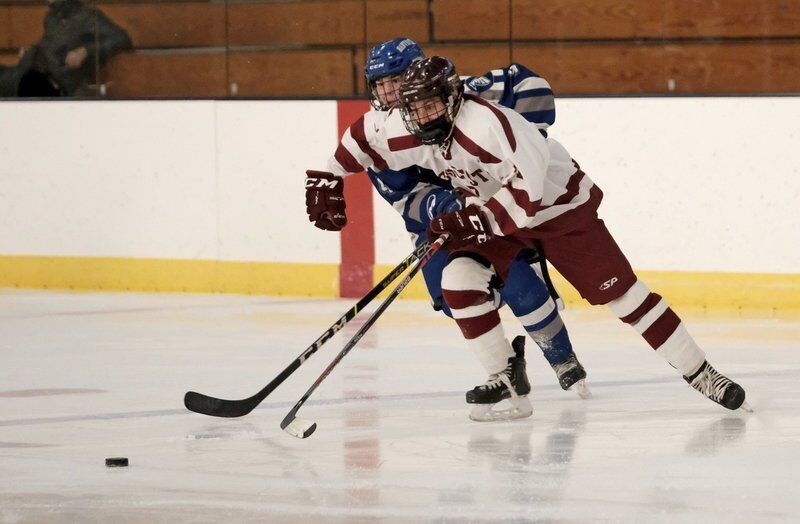 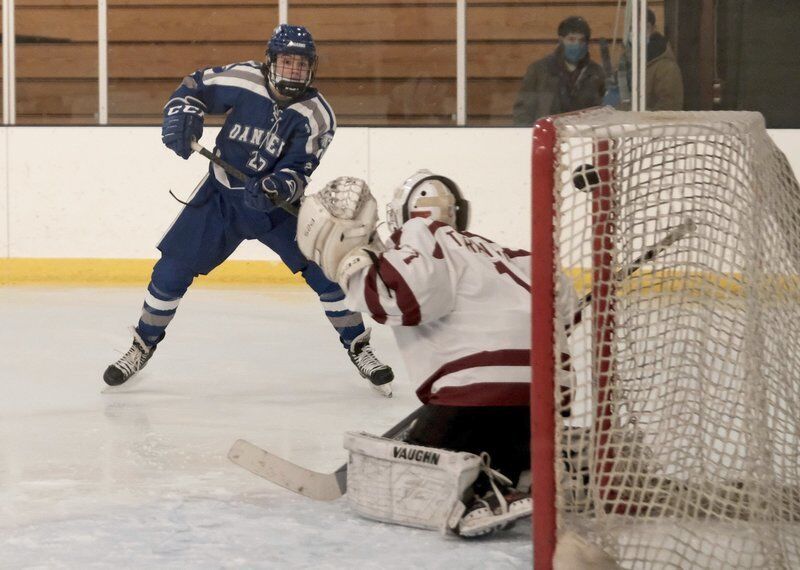 Kirk R. Williamson PhotoGloucester's Emerson Marshall cuts to the middle of the ice past Danvers' Dillon Driscoll in Sunday's game at Talbot Rink.

Kirk R. Williamson PhotoDanvers' Aidan Lanphere is sandwiched between Gloucester's Zach Morris and Ryan Frates in a battle for the puck along the boards during Sunday's game at Talbot Rink.

It was the season finale for both the Gloucester and Danvers boys hockey teams Sunday afternoon at Talbot Rink. The two Northeastern Conference rivals, however, came into the game in vastly different situations.

The visiting Falcons were finishing up a jam-packed final week by playing their third game in three days. Gloucester, on the other hand, was playing its first game in 17 days — a win over Saugus on February 4 — due to a COVID-19 shutdown.

In the end, it was Danvers that had more left in the tank as Dillon Driscoll's goal with 3:13 remaining led to a 4-2 win.

Gloucester head coach Derek Geary thought his team could have been a lot better in Sunday's loss, but was still quick to credit the team for its overall performance on the season. The Fishermen finished up at 6-3.

"I thought this was probably our worst game, but one game does not make a season," he said. "I thought we did a lot of fantastic things this year. The last couple weeks was a tough situation that was out of our control, but I thought the kids handled it with a lot of perseverance and dignity.

"It was a good season overall, we can just bury this game and forget about it."

For Danvers, it was a perfect way to end a season that got off to a slow start. The Falcons finish up at 6-7 after beating Marblehead (4-1), Saugus (7-1) and Gloucester on consecutive days.

All three of those wins came with head coach Steve Baldassare back on the bench. The Falcons' veteran head coach and his top assistant, Ryan Hayes, were not allowed to guide the team while an independent investigation into the program took place at the behest of school administrators. In their absence, Andrew O'Neill (who served as an assistant coach in the final three games) took over as 'acting head coach' and guided the Falcons through their first 10 games this winter.

"It really helped having our two coaches back on the bench," Falcons' senior captain and defenseman Michael Papamechail said after Sunday's game. "We really appreciate Coach O'Neill and what he did for us, he's part of our family now. Having all the coaches back this weekend really brought the team together — and we left it all out there to get those wins."

As is normally the case when these two teams meet, Sunday's game was decided in the final minutes of play.

The Falcons took a 2-1 lead into the third period, but Gloucester tied it up with 8:31 to go when Ryan Bergin scored a power play goal from the slot on a centering pass from Jack Costanzo to make it 2-2.

The teams traded shots for the next several minutes until Danvers took the lead back with 3:13 to go. At the end of a strong shift, Driscoll put a shot on goal from the bottom of the right circle that was stopped by Gloucester goalie Nick Tarantino (24 saves). But Driscoll got his own rebound and wrapped around to the other side of the net for the goal and a 3-2 Falcons lead.

Gloucester had one final chance, going on the power play with 3:06 left. But Danvers got an insurance goal as freshman Caleb White broke up a pass in his own end and shot the puck into an empty net from just outside of his own blue line to cap the scoring.

It was Danvers that came out strong in the opening frame, carrying play territorially in the first 15 minutes and taking a 1-0 lead on a goal from Brian Taylor with 36 seconds to go until first intermission. The Falcons then doubled their lead 2:30 into the middle stanza when White picked the top right corner on a shot from the left dot.

"It's always close when we play Gloucester, so we knew we needed to come out strong early," Papamechail said. "Getting out ahead was huge."

Gloucester got on the board in the middle of the second period with a power play goal from Emerson Marshall to make it 2-1.