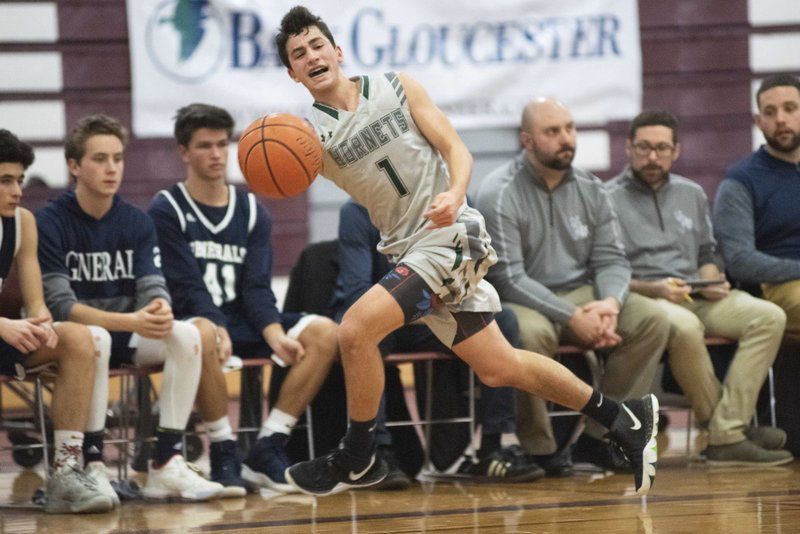 Manchester Essex guard A.J. Pallazola attempts to save the ball on the sideline in Friday’s BankGloucester Holiday Tournament game against Hamilton-Wenham. 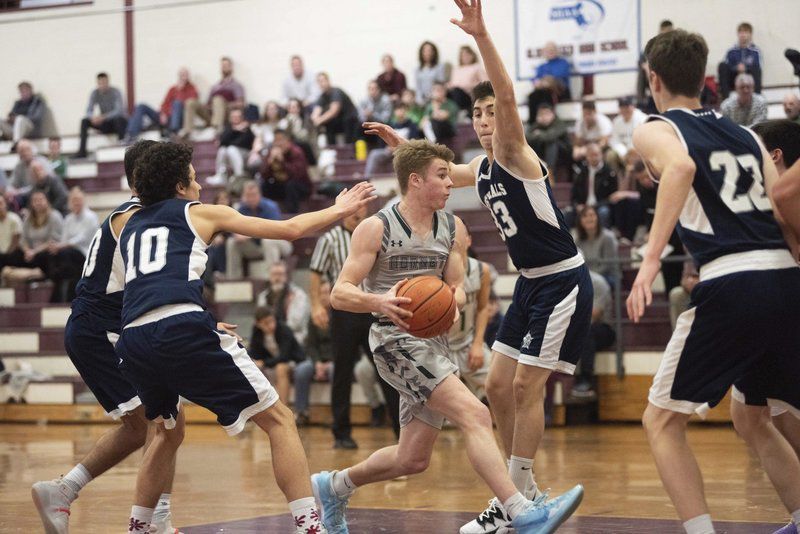 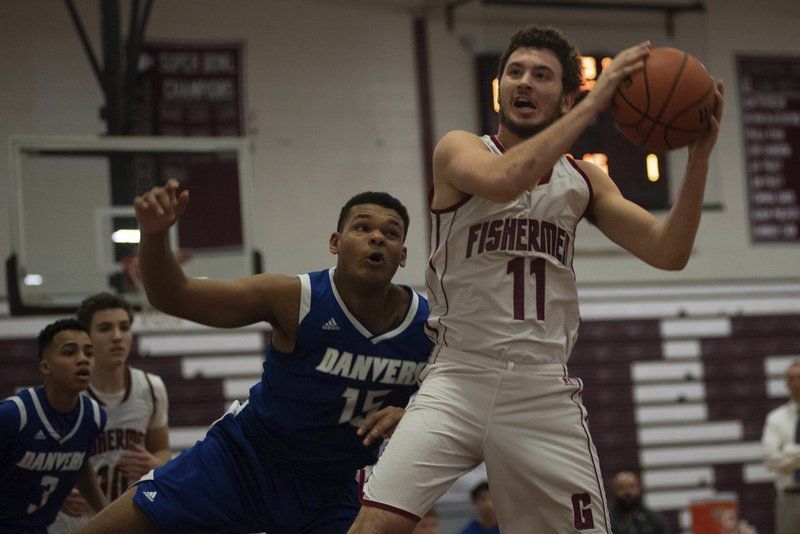 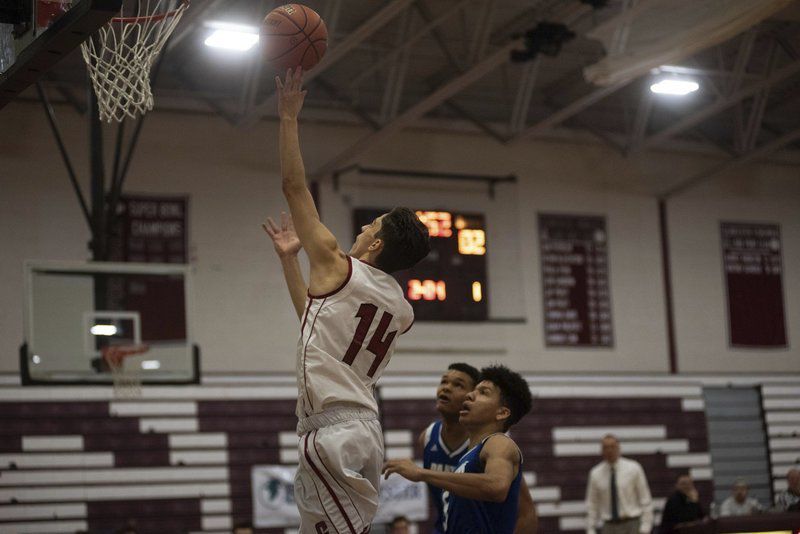 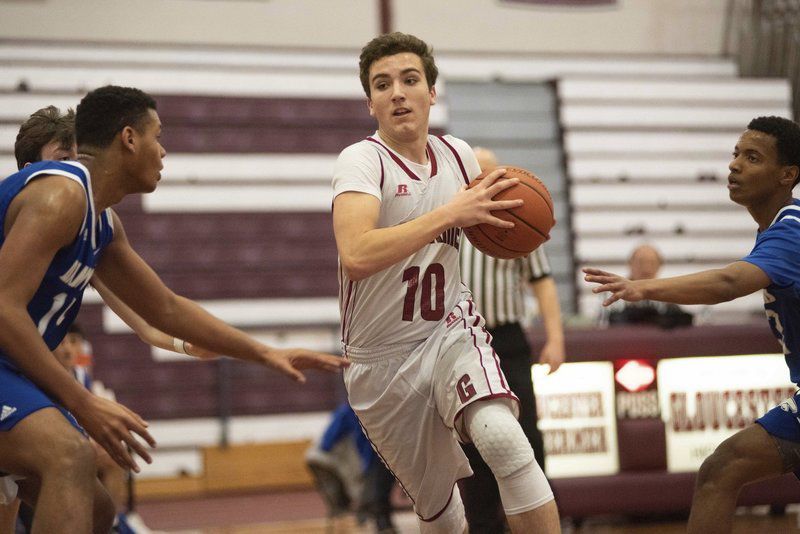 Ryan McBride/Staff PhotoGloucester's Zach Oliver drives to the basket in Friday's game against Danvers in the BankGloucester Holiday Tournament. 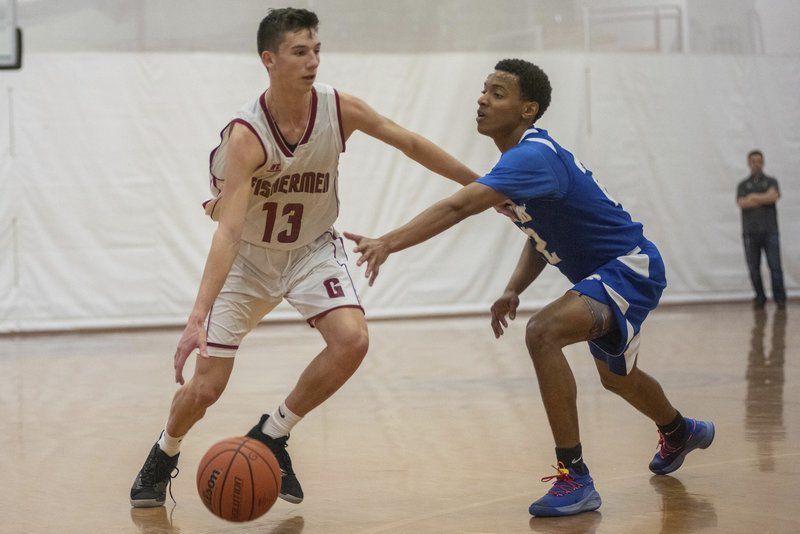 Ryan McBride/Staff photosGloucester’s Byron Thomas drives to the basket on Friday against Danvers.

Manchester Essex guard A.J. Pallazola attempts to save the ball on the sideline in Friday’s BankGloucester Holiday Tournament game against Hamilton-Wenham.

Ryan McBride/Staff PhotoGloucester's Zach Oliver drives to the basket in Friday's game against Danvers in the BankGloucester Holiday Tournament.

Ryan McBride/Staff photosGloucester’s Byron Thomas drives to the basket on Friday against Danvers.

The first round of the annual BankGloucester Holiday Basketball Tournament featured a pair of rivalry games at the Smith Field House on Friday afternoon. After two tight games, it was Manchester Essex and Danvers that earned a trip to Saturday’s Tournament Final back at Gloucester High (4 p.m.).

Gloucester and Hamilton-Wenham will meet in the consolation game at 2 p.m.

The host Fishermen and Falcons opened up the tournament with a tense contest that could not be settled in regulation until Danvers took control with an 8-3 run to start overtime, with all eight points from Chris Perez, who led all scorers with 32 points.

“This win is something to build on and puts us in a pretty good spot,” said Danvers head coach Chris Timson, whose team moves to 3-2 on the season with its third straight win. “We have 11 new varsity players on the roster but our inexperience shows sometimes. But we competed all game and showed a lot of hustle down the stretch to get it to overtime and eventually win.”

The game saw eight lead changes, all in the second half, and was hanging in the balance late in regulation. Gloucester had a 56-50 edge with 4:30 to play, but Danvers chipped away at that lead, taking a 57-56 lead with 90 seconds left on a big shot from Perez.

Freshman Jayden DelTorchio (10 points, 10 rebounds), who Gloucester head coach Khris Silveria called “a big bright spot off the bench” followed with a pair of free throws to put Gloucester back up by a point, but Danvers responded with an incredible individual effort. On a scramble for the ball, which saw two Gloucester defenders and Danvers guard Adonis Sanchez-Manon dive on the floor after the ball. Sanchez-Manon, who scored nine of his 14 points in the fourth quarter, eventually got possession and, from his back, put up a shot from underneath the basket that somehow went in to give Danvers a one-point lead.

“That was unbelievable,” Timson said. “He’s shifty and he’s crafty and he always gives us instant offense and energy when he comes off the bench.”

Gloucester tied it back up with a free throw and the teams traded final possession turnovers to send it into overtime.

The Fishermen led by nine in the final 30 seconds of the half, when Danvers exploded for a pair of three-pointers, the last from Colin Keller at the buzzer to take momentum into the second half, trailing by only three, 28-25.

In the third, the Falcons ran with that momentum and took their first lead early in the frame, but the lead would change hands six times in the third, eventually finishing with Gloucester ahead, 47-41 after a Montagnino three at the buzzer and the hot hand of Zach Oliver (16 points).

“We had chances to break it open but Danvers would always respond with a nice hustle play or a three-pointer,” Silveria said. “I thought they outworked us on the little things today like the loose balls.”

In the second game of the afternoon, Manchester Essex broke out to an early lead thanks to a dominant, 23-13 showing in the opening quarter. The Hornets were powered by a high pressure, full court press that gave the Generals some big time problems to the tune of nine first quarter turnovers.

In the second quarter, however, Hamilton-Wenham adjusted to the press and started to find some success, eventually cutting the deficit to 32-31 at the half.

“(Hamilton-Wenham) took it right to us in that second quarter,” Manchester Essex head coach Tim St. Laurent said. “And we weren’t giving it back so it made us a little helter skelter with our press.”

St. Laurent then made an adjustment, switching to a 1-3-1 zone, and it helped the Hornets get back on their game of forcing turnovers.

The Manchester Essex defense held the Generals to just four points in the frame to take a 46-35 lead into the fourth quarter.

“The defense propels us,” St. Laurent said. “Once we went to the 1-3-1 we were able to step up and stop them from getting to the hoop we were much better.”

Hamilton-Wenham did not go quietly in the fourth as Ryan Hutchinson (17 points, 11 rebounds) and Markus Nordin (16 points, 10 rebounds) started finding a rhythm and helped cut the deficit to two possessions on multiple occasions. Manchester Essex, however, always had an answer as Jack Shaw (game high 24 points) and Mason Paccone (19 points) each knocked down clutch three pointers and Kellen Furse (19 points) knocked down some big foul shots to preserve the win.

“We tell those guys to shoot it because we want our shooters to know they got the green light,” St. Laurent said. “They hit some big shots to keep us ahead.”

The Hornets now turn their attention to Danvers in Saturday’s final.

“It should be a good game,” St. Laurent said. “We scrimmaged them in the preseason and we know they have some player. Defense will be the key again.”