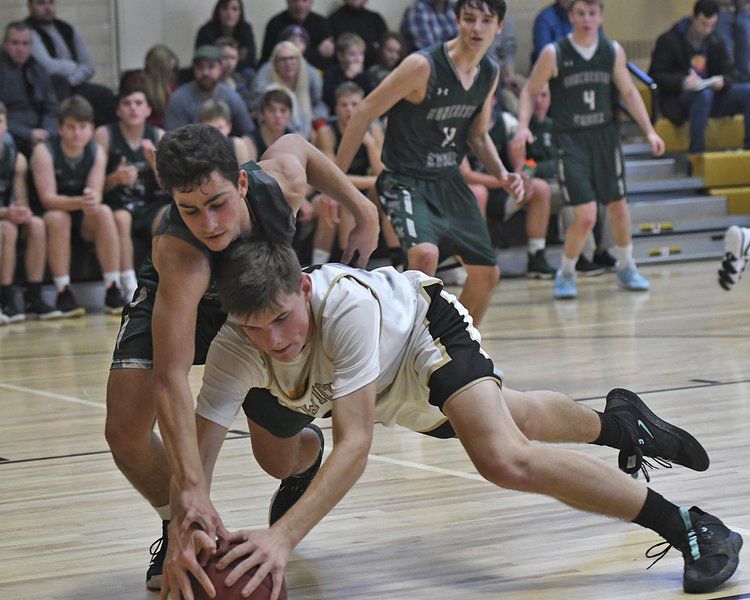 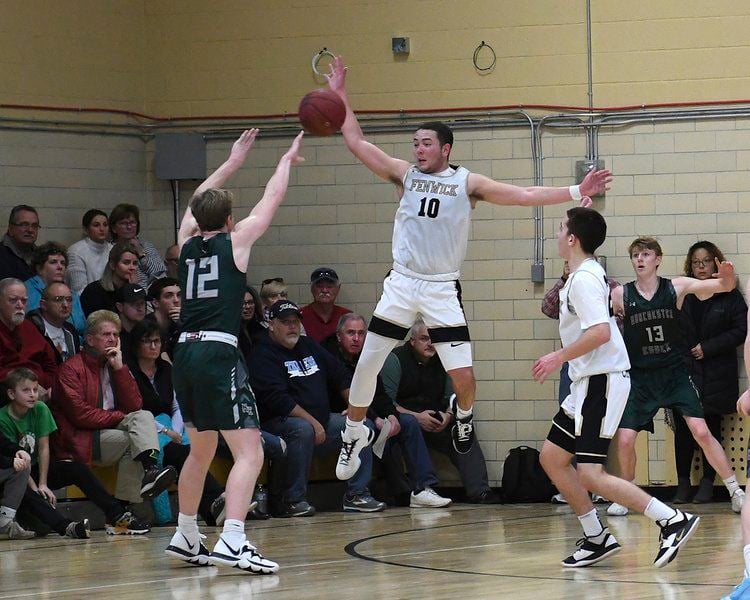 PEABODY — There were so many momentum swings, lead changes and clutch plays during Sunday afternoon’s double overtime boys basketball clash between Bishop Fenwick and Manchester Essex.

But of all the monumental moments, it was an and-1 put back from Hornets’ junior Jack Shaw that stood tallest.

Trailing by four points with under two minutes to play in the second OT, Manchester Essex drew a foul and headed to the line for two. Both shots bounced off the rim, but the second miss was snared up by Shaw in traffic and tossed through the net for two plus the foul. The big man calmly drilled the ensuing freebie, and a couple big defensive stops, another Hornets’ layup, and one last free throw down the stretch ultimately sealed a 76-74 road win for the Hornets.

It was a thrilling contest between two of the top teams in Division 4 North, one that says a lot about both these squads as they head towards the meat of their schedules.

“It was just a great high school game,” said Fenwick coach Kevin Moran, his team now 4-2 on the year. “I saw (Manchester Essex) a couple of times and knew they were real scrappy, real tough and from my perspective it just came down to execution in the end. I was happy with our compete, no question, we just came up a bit short.”

Prior to the final frenzy in double OT, both teams had plenty of chances to finish things off.

After trading baskets for much of the fourth quarter in what was a back-and-forth contest throughout, Manchester Essex’s Kellen Furse (game-high 29 points, 10 rebounds, 3 assists, 2 steals and a block) got free for a layup to give his team a 59-56 lead. But Fenwick’s Max Grenert (13 points, 12 rebounds, 1 steal) answered with one of his three triples to knot things up once again.

Manchester had another chance to take the lead in regulation, but missed a pair of free throws with under a minute left and the game went to OT.

Then, in the initial extra frame, Fenwick built a four-point advantage thanks to a layup and a pair of free throws from Alex Gonzalez (12 points, 2 rebounds, 2 assists, 1 steal), only to see Furse respond with a 3-ball. A free throw and jumper from Shaw tied things up again, setting the stage for the second and decisive extra frame.

“Romans is a good player and he’s going to get his points ... all we can say is we want Romans to take tough shots,” said Manchester Essex coach Tim St. Laurent. “We want to make him grind for every shot so when it comes down to it at the end of the game hopefully his legs are a little bit tired for such a good player. I thought our guys did a really good job on him.”

On the other end, Furse had the counter. The fiery guard was all over the court en route to the balanced stat line and near 30-point performance. It took him a while to catch his breath following the win, but when he finally did he was still feeling the energy from the pulsating triumph.

“Most exciting game I’ve ever been a part of,” said Furse. “I can’t imagine watching it as a fan.

The adrenaline going through me still right now is just insane.”

“We’re just a scrappy team,” he added. “We’re not a team full of superstars, we just have a bunch of role players who play super well together and we know we have to grind out wins with high pressure and high intensity. This was just a huge momentum building win for us.”

The first half saw Fenwick jump out to a 33-26 lead at the break thanks to some incredible play in the paint from junior Christian Loescher. The big man, who would foul out down the stretch, went for six points, five rebounds, four steals and five blocks in the first half alone and was instrumental on both ends of the floor. He finished the game with 12 points, 14 rebounds, eight blocks, four steals and a pair of assists.

The Crusaders would increase their lead to as many as 10 points early in the third, but the Hornets came right back with a run of their own to set the stage for the wild finish. Mason Paccone (18 points, 5 rebounds, 1 assist, 1 steal) and Alexander Furse (7 points, 8 rebounds, 2 assists, 1 steal) were among the other Hornets to make big time plays, while big man and captain Frank Wood (7 points, 8 rebounds, 2 assists, 1 steal) returned to the lineup in a big way.

“Just a great game with two of the best teams in D4 going at it,” St. Laurent concluded. “It was awesome; couldn’t ask for anything better.”