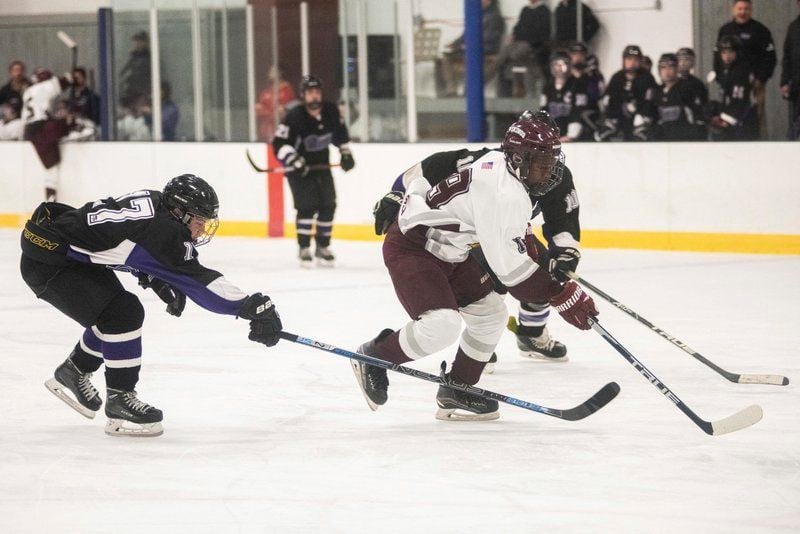 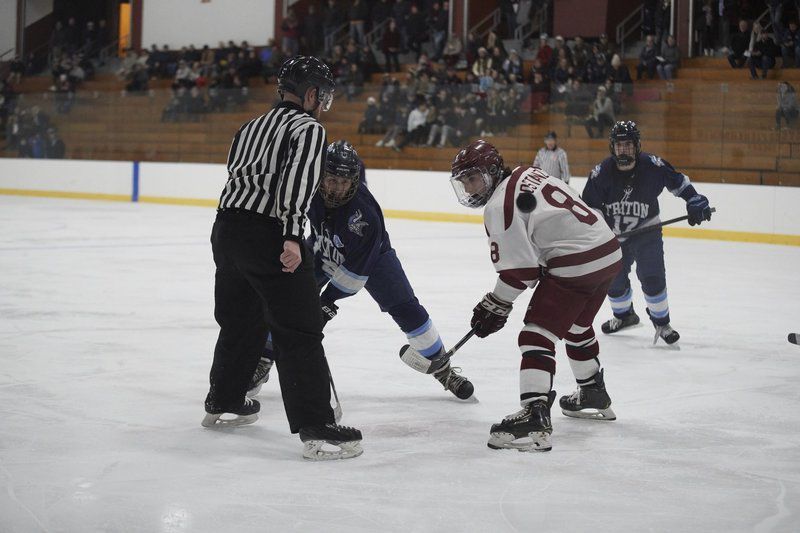 Jared Charney PhotoJack Costanzo and the Fishermen are right at the .500 mark with a record of 4-4-2 at the halfway point of the regular season.

Jared Charney PhotoJack Costanzo and the Fishermen are right at the .500 mark with a record of 4-4-2 at the halfway point of the regular season.

Both the Gloucester and Rockport hockey teams are in midseason form and still very much in the state tournament mix as the second half of the regular season approaches.

Although both squads have had their share of ups and downs, both have plenty of reasons to be optimistic over the next 10-plus games. Here's a look at what each team brought to the ice in the first half of the regular season.

Highlights: The Fishermen just saw an impressive four-game win streak come to an end this past Saturday against Northeastern Conference North leading Marblehead. In four wins over Lynnfield, Winthrop, Wayland and Swampscott.

Over the last few weeks, the Fishermen have found a rotation that works and it has led to results.

Offensively, the team is led by a standout first line featuring senior captain E.J. Field, sophomore Jack Costanzo and freshman Jack Delaney, who are the team's three leading scorers and have accounted for 63% of the team's goals this winter.

In recent weeks, the Fishermen have also developed a second line to go along with the first as senior captain Jeremy Abreu and senior Harry Marshall, both converted defensemen, join sophomore Ryan Bergin. It's a line that was recently put together but produced right away.

Gloucester's biggest strength may be in goal as senior captain Connor Vittands has been as consistent as they come in goal. He essentially stole two points from Lynnfield in a 40-save performance and its hard to imagine where the team would be without him this season.

Lowlights: With a fairly inexperienced roster, it took the Fishermen a couple weeks to find their stride, mostly due to the fact that their season opening schedule featured some of the best programs in Division 2 North in Masconomet, Triton and Marblehead (twice).

Gloucester struggled to score in an 0-3-2 start, scoring just one goal in each of its first four games. Fortunately, Gloucester has dug its way out of that early season hole and is right at .500 at midseason, needing 10 points in 10 games to reach the state tournament.

Second half outlook: Gloucester's second half schedule is not as difficult as its first half schedule, with nine of its final 10 games coming against Northeastern Conference, but that doesn't mean it's not challenging.

Gloucester is 2-1 in the conference and has plenty of NEC challenges ahead including two games against Danvers, the first coming on Wednesday at Talbot Rink (6 p.m.), two games with Beverly and another meeting with Marblehead and Winthrop.

The team also has four games against the NEC South and a second meeting with Lynnfield in the regular season finale. Given the way the team has played in recent weeks, it should be able to pick up the ten points it needs, and some.

Highlights: The Vikings have turned it on in the last week and went from being on the ropes to being right back in the state tournament picture with wins over Minuteman and Shawsheen.

The Minuteman win was one that Rockport was expecting, but a 2-1 win over Shawsheen this past Saturday was the team's biggest win of the season and the highlight of the first half. The Rams entered Saturday's game at Talbot Rink with an unbeaten record in the Commonwealth Athletic Conference. With the win, Rockport jumped right into the conference and tournament race and it was the type of win that could help the team build some serious momentum.

The Vikings are a well balanced team with talent in every zone. They will not light up the scoreboard, but they rarely beat themselves and it always takes a strong effort to beat them.

Seniors Walker Knowles and Cal Twombly have split time in goal and both have been very good.

Lowlights: Rockport has played up and down to its competition at times. A scoreless draw against St. Joseph's Prep is a game the team surely feels it should have won. Fortuntely, the team has saved some of its best performances against good teams such as the aforementioned win over Shawsheen and a 2-2 against a formidable Essex Tech squad.

Second half outlook: With 11 games remaining, Rockport needs 12 points to reach the postseason, and it will be playing plenty of good teams.

The Vikings finished their season series with CAC leading Shawsheen, splitting two games, and it has a big game on Wednesday night at Talbot Rink against a Northeast team that is fighting for conference positioning with Rockport. The team also has another meeting with Essex Tech in the conference along with a second conference meeting against Nashoba Tech and Minuteman, which Rockport beat the first time around.

If the Vikings continue to play the way they did against Shawsheen, they are looking like a state tournament caliber team.