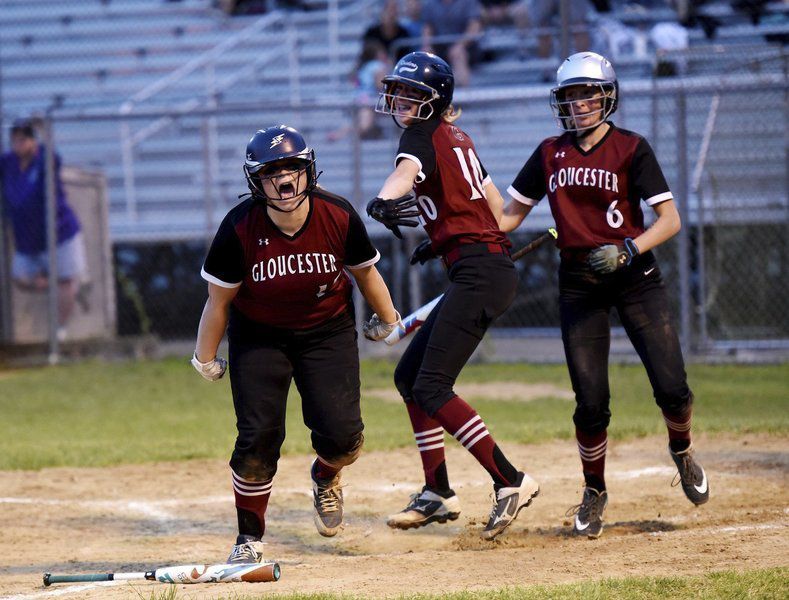 PAUL BILODEAU/Staff photoJenna Hoofnagle celebrates after scoring what turned out to be the game winning run in a 3-2 win over Norton one year ago today.

PAUL BILODEAU/Staff photoJenna Hoofnagle celebrates after scoring what turned out to be the game winning run in a 3-2 win over Norton one year ago today.

It was one year ago today, June 19, 2019, when the Gloucester softball achieved a historic feet.

The Fishermen, newly crowned Division 2 North champions, played for the Eastern Mass. championship at Martin Field in Lowell against South champion Norton for a berth in the Division 2 State Finals. What ensued was the victory that sealed the greatest season in the history of girls sports at Gloucester High.

In a tense, nail-biting game that saw elite pitching and near flawless defense on both sides, it was Gloucester that came away with a 3-2 win to clinch the Eastern Mass. crown.

"It's something none of us will ever forget and looking back on it a year later, I just think about what an incredible run it was," head coach John Nicastro said. "It's such a compliment to everyone involved in the program, from the boosters on down. They earned an opportunity to do something great and they ran with it. They did it through hard work and team chemistry."

Even a year later, the softball program's achievement is still incredibly impressive. To put the season into perspective, Gloucester softball is the one and only girls sports team at GHS to play in a state championship game and only one of three programs in school history to compete in a state final, joining the football and hockey programs.

Gloucester has had countless great teams over the course of its storied athletic history, and the 2019 softball team cemented itself as one of the school's all time greats with a pulse pounding state tournament run that ended in the final game, the Division 2 State Finals.

Although the state finals was a 4-1 loss to an outstanding Hudson team, the Fishermen took the city on a ride that it had never seen before in the sport of softball.

"I think what's really special about the run is when you look at all of the great teams Gloucester has had in all sports, this one was one of the best," Nicastro said. "They were just so good at capitalizing in those winning moments. It just makes everyone hungry to get back there again because it was such a fun time."

Good teams are dime a dozen, even very good teams don’t come around often. But a team like the 2019 softball team, led by senior captains Jemima Grow, Sydney McKay, Liz Schuster and Tracy Wood, is one of those once in a generation teams that put it all together when it mattered.

In four state tournament games, Gloucester was incredibly clutch, winning two games by a single run and the Division 2 North Finals in extra innings. In those games, the Fishermen found success because they were such a well rounded team with no weakness for the opponent to take advantage of.

"When you get deep into the tournament it really is a game of inches," Nicastro said. "Every team is on point and playing at such a close level. You have to be flawless in the big moments."

The postseason began with a 1-0 win over arch rival Danvers. The teams were the top two teams in the NEC during the regular season and split two games, with Gloucester taking the rubber match on the big stage. McKay ended up pitching a complete game shutout to advance while shortstop Ella Marshall had a big game defensively.

After a blowout win over Whittier Tech in the semifinals, Gloucester faced a mighty Triton team with a loaded lineup and some serious pop. While the Fishermen are most known for their pitching and defense, the bats came out in the North Finals as the teams were tied, 6-6 after seven innings. Gloucester then unleashed an unforgettable display of small ball, scoring eight times in the top of the eighth for a 14-6 win.

"It's unbelievable how close those games were," Nicastro said. "Danvers is a team that's built for the tournament and we know everything about each other. Then against Triton we got the clutch hits when we needed them and did what we did best in extras going to small ball."

That set the stage for the Division 2 North State Semifinals against Norton, a pitcher's duel that saw Gloucester trailing 2-1 heading into the bottom of the sixth inning.

That's when freshman Jenna Hoofnagle laced a line drive into the gap in left center, past a diving Norton center fielder and all the way to the all. The tying run scored easily and then a throw to third base got away, allowing Hoofnagle to come in with what turned out to be the game winning run.

"Before I could even tell Jenna to go she already popped up and was running home," Nicastro said. "She just beat the throw. If she hesitates at all she's out. A play like that took unbelievable softball instincts."

The win showed just how flawless Gloucester was as a team. Playing against the best of the best, the Fishermen followed up a slug fest with a low scoring, grind of a game where both teams had few opportunities to get something going.

"It was such an unforgettable season," Nicastro said. "Hopefully that set the bar for the program and showed future teams what it takes to get there."