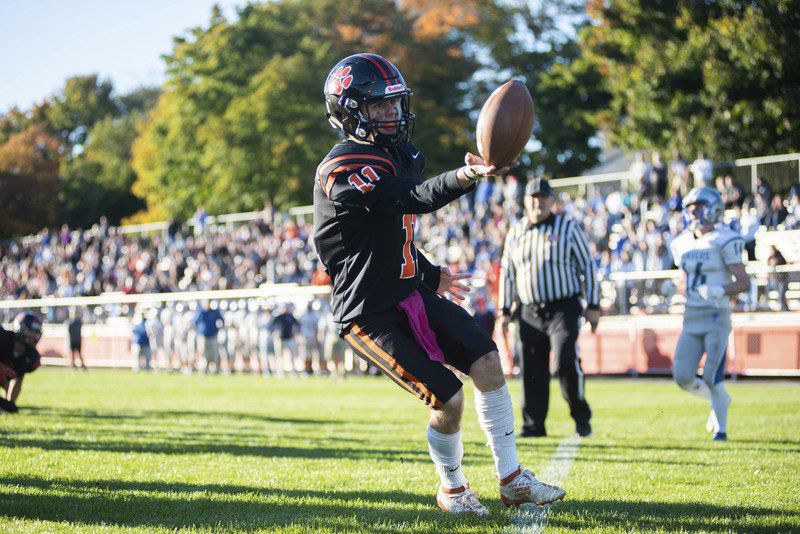 There's just something special about attending a football game at Hurd Stadium on a Saturday afternoon in the fall.RYAN MCBRIDE/Staff photo 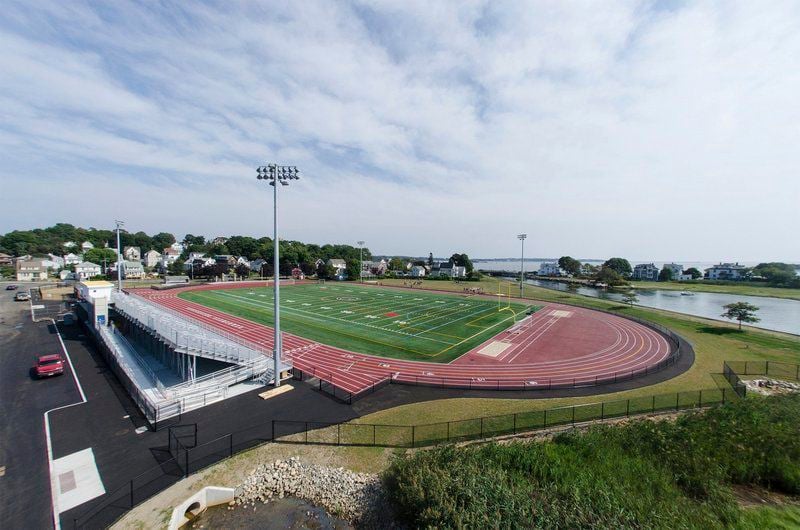 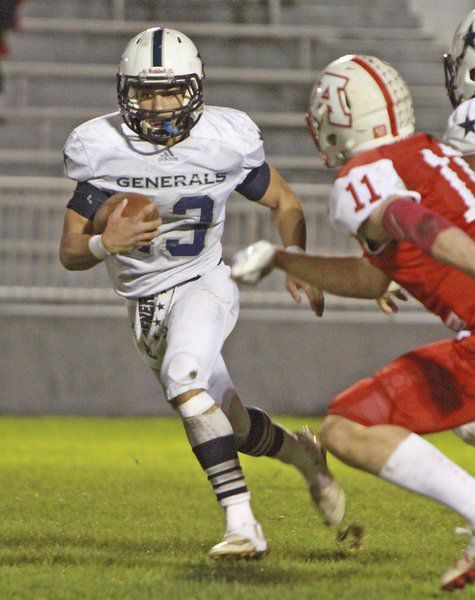 Amesbury's Landry Stadium is one of the more unique places to play on the North Shore. Salem News file photo/Nicole Goodhue Boyd 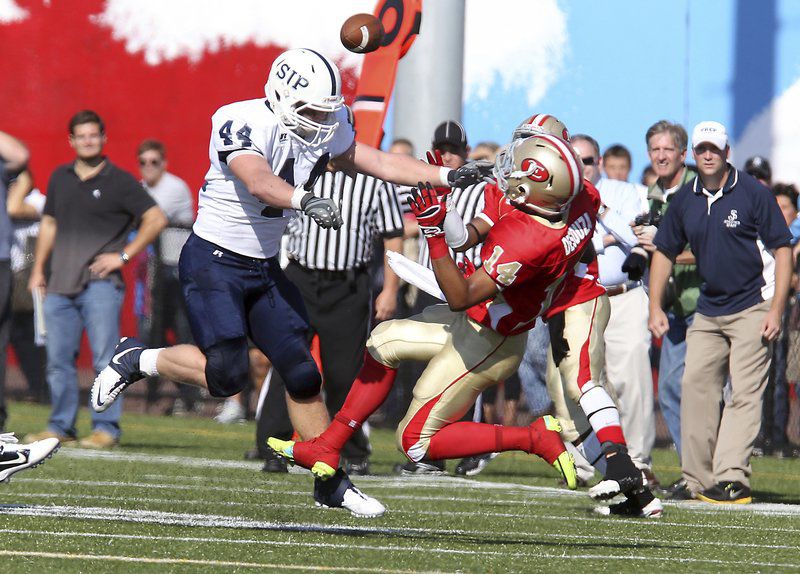 The huge red waves on the wall (background) are one of the signatures of the hornet's nest that is Everett Memorial Stadium. Staff file photo/David Le

There's just something special about attending a football game at Hurd Stadium on a Saturday afternoon in the fall.RYAN MCBRIDE/Staff photo

Amesbury's Landry Stadium is one of the more unique places to play on the North Shore. Salem News file photo/Nicole Goodhue Boyd

The huge red waves on the wall (background) are one of the signatures of the hornet's nest that is Everett Memorial Stadium. Staff file photo/David Le

In today's "Our Favorites," we pick our favorite places to cover high school football games.

I'm going with a predictable pick here and taking the stadium I've covered the vast majority of high school football games, sporting events and even a greasy pole competition at. Not to sound like a total homer, but Newell Stadium really is the most unique stadium on the North Shore for multiple reasons.

For starters, the scenery is unmatched, especially from 2013 on with the newly refurbished field having bleachers on one side. That gives fans, and those in the press box, an incredible look at Gloucester Harbor, the busy Blynman Canal and the Blynman Bridge. The stadium is also in the Guinness Book Of World Records as the only field in the entire world that is under sea level. That's right; the sea wall of the Blynman Canal actually rises above the playing surface.

The weather also makes Newell Stadium a unique viewing experience, which can be good and bad. Whatever the temperature is inland, you can subtract at least 10 degrees from that on the water. And the wind is almost always whipping in one direction, oftentimes changing direction over the course of the game. That can lead to some interesting moments — like one time where a visiting coach elected to take the wind instead of the ball when given the choice in the second half.

The old Newell Stadium also had some serious character and was a big advantage for the home team, who practiced in the same conditions on the same playing surface — which was a choppy mess back in the day. Opponents didn't like to come down there as it was a little more uncomfortable than most places, both in the weather and atmosphere.

Newell Stadium also has some sentimental value to me. Not only did I play there during my high school years, but now I work in a press box named in honor of my grandfather, the late John "Doc" Enos. It's a predictable selection for a Gloucester native, but it passes the test.

There's just something about watching a high school football game on a Saturday afternoon in the fall. And there's no better place to do so than the gridiron cathedral known as Hurd Stadium.

Built and first used in the 1930s, Hurd has been home to some of the best football teams, and games, in North Shore football history. When time started to take its toll on the historic landmark, it was given a much needed facelift in 2015 and prior to the start of the 2016 season. It became a more modern facility without losing any of the charm and intangibles that make it a must-stop spot for football fans across the area.

A Saturday afternoon tilt at Hurd takes you back in time metaphorically. First off, it's a grass field. Turf surfaces are great for so many reasons (maintenance, feasibility, etc.), but there's something about a well-maintained, lush kelly green tract of the real stuff that's hard to beat. You've got the old ticket taker booths — one that's built into the venerable clubhouse that houses the Panthers. The steps that lead up to that clubhouse from field level each have a year representing a Beverly High football championship season. The south end zone has the age-old scoreboard and a view of neighboring Cooney Field, with future Panthers often playing some form of football just beyond the fence. Fans often line up behind the north end zone, cheering as their hometown heroes march towards paydirt. The stands are in the sunlight, backlit with the changing color of leaves from the trees that sprout up behind them. On the home side of the stadium, fans can chose to watch from the grassy hill or bring lawn chairs and a blanket to view the action from.

Is Hurd perfect? No; the 7-person metal container that serves as a press box — which became a literal freezer on Thanksgiving Day 2018 — is not exactly a lap of luxury. Still, every time I make the walk from the parking lot on Mel Deveau Way down into the bowels of the stadium and allow myself to appreciate the surroundings, it's something to cherish.

There is not a single football field in Massachusetts that matches the game day atmosphere on Route 16, be it a Friday night or a Saturday afternoon. Huge Homecoming parade? Giant red wave painted on the walls? Fried dough vendors? Check, check and check.

I've covered a half-dozen games in Everett and every time I walk into the place I get that "hair on fire" feeling in the pit of the stomach that lets you know it's time to play football. Taking a deep breath on the sidelines at that place makes me wish I was still playing football. Come to think of it, back when I did I had the unfortunate privilege of being heckled by an older gentleman while marching from the clubhouse to the field, "I didn't know you guys called up Pop Warner players."

Yes, I'm short, and yes, I laughed. It was a good line. And the point is that Everett's football game day experience is one of the only places were everybody in the joint still cares enough to heckle. Football matters in that town and when you're in that stadium, you can feel that weight on your shoulder pads.

There's stands on both sides, you have to park a mile away, it's a hornet's nest of hostility, and when the band strikes up the Note Dame fight song it's intimidatingly loud. It's the only place in Eastern Mass. that makes you feel like you're working in a big-time stadium like Alabama or Michigan.

The way Curt Schilling loved walking into Yankee Stadium pitching for the Red Sox is the best way I can describe how it feels walking into Everett Stadium covering the road team. And maybe if my career lasts long enough, I'll even get to cover one that wins there.

One of the first football games I covered on the high school sports beat happened at Landry Stadium, and I haven't been to a field like it since. If my memory serves me correct, the clash at hand was actually a blowout on that particular evening — but that didn't matter to me.

Landry isn't the newest or most state-of-the-art place, nor is it the biggest. But its bowl-shaped foundation and set back location make it unique and aesthetically pleasing. The concrete wall surrounding the entirety of the field brings fans and media alike closer together and closer to the action, making for a special viewing experience.

Landry is also one of the few high school football fields around that continues to boast an authentic grass surface — which can be a good or bad thing, depending on how you look at it. Growing up in West Newbury and attending Pentucket Regional High School, I was always used to a real grass playing field, where the slightest of rainstorms on a Friday night would make for a mud-filled affair the following day. Grass just brings a different element to the game; it's not as reliable, but it's certainly capable of creating some unexpected action come game day.

As a non-football player who hates the cold weather, usually any place with a warm press box will do the trick. But if given the chance to go to a place reminiscent of an old college stadium, I'd opt for Landry almost every time.