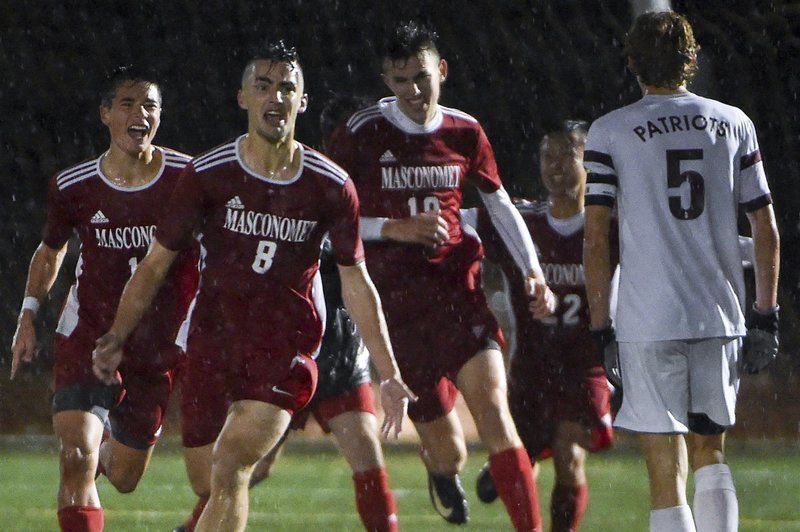 Staff file photo. Masconomet's Matt Dzwil (8) celebrates his equalizer against Concord-Carlisle in the 2018 Division 2 state tournament. The Chieftains would score another in the second half to complete the comeback. 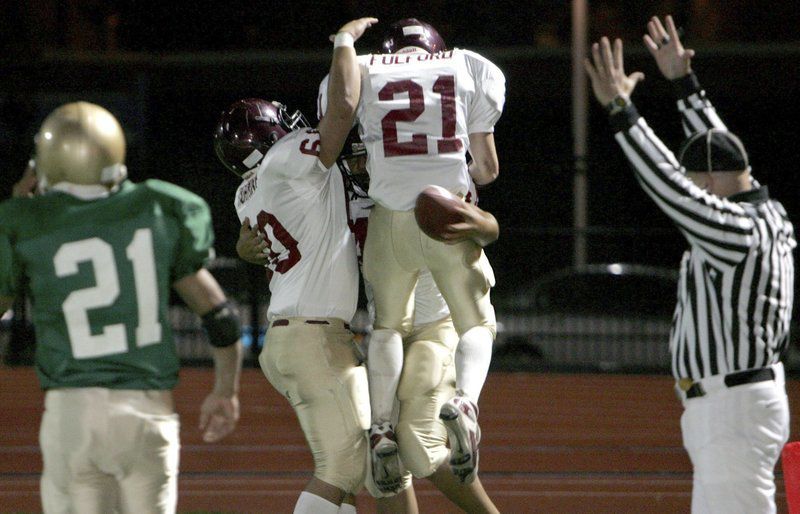 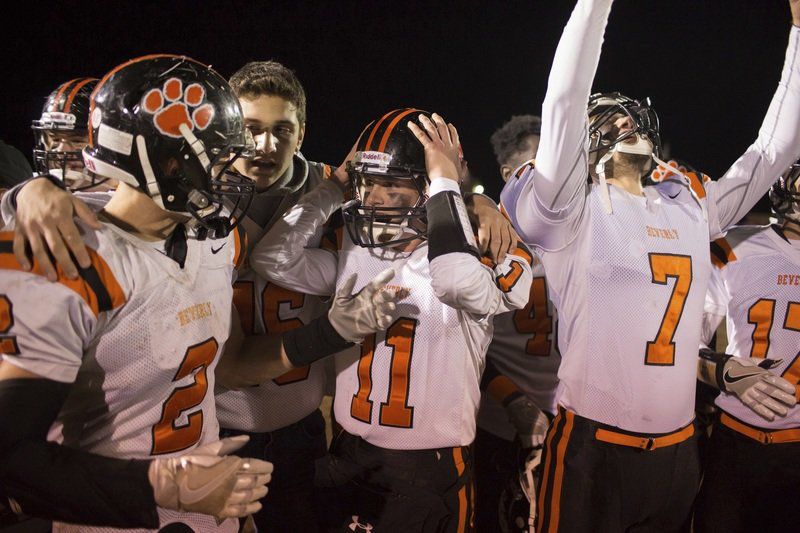 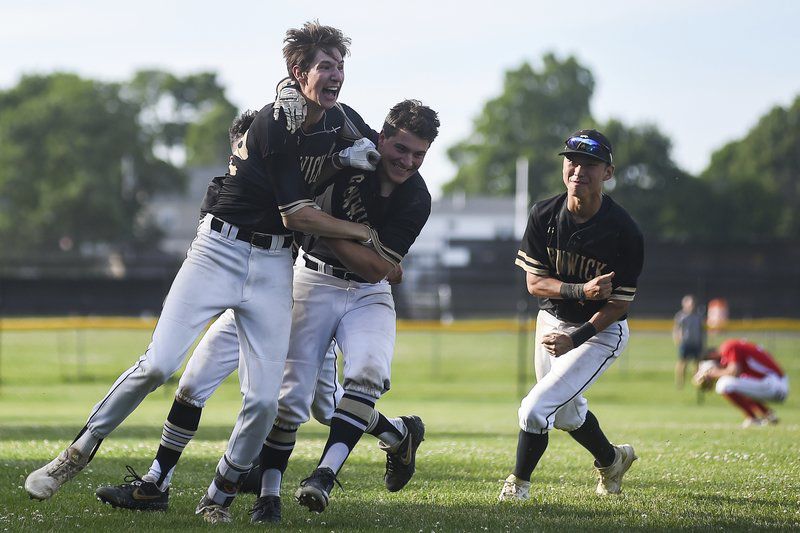 JAIME CAMPOS/Staff photo Trey Deloury, left, and Bishop Fenwick's comeback win over Saugus was recent but also one of the most memorable and remarkable we've seen.

Staff file photo. Masconomet's Matt Dzwil (8) celebrates his equalizer against Concord-Carlisle in the 2018 Division 2 state tournament. The Chieftains would score another in the second half to complete the comeback.

JAIME CAMPOS/Staff photo Trey Deloury, left, and Bishop Fenwick's comeback win over Saugus was recent but also one of the most memorable and remarkable we've seen.

In today’s “Our Favorites,” we pick our favorite comeback victories by a high school team.

Back in 2007, this NEC showdown at brand new (and yet-to-be-finished) Manning Field was a de facto playoff game pitting the top two teams against each other, with the conference champ receiving the league's only playoff spot. Both the Fishermen and Rams were unbeaten in league play, and while the conference title was not officially on the line that night, everyone knew the winner was heading to the playoffs.

It looked like Lynn Classical was going to roll to a fairly comfortable victory as it held a commanding, 22-6 lead with just over seven minutes to play in the fourth quarter. But an Anthony Enderle TD cut the Rams' lead to 22-12, and quarterback Rick Gallant then hit Dylan Maki for a 25-yard touchdown on Gloucester's ensuing possession. The 2-point conversion made it 22-20 with 2:43 to play.

Classical only needed a first down to ice it, and went for it on 4th-and-2 from the Gloucester 49 yard line. The Fishermen, however, made the defensive stop and got the ball back. Two long runs from Enderle followed, and Andrew Fulford finished off the drive with a 2-yard plunge to give Gloucester the 26-22 victory.

The win had serious ramifications both in the 2007 season and beyond. It propelled Gloucester to the Division 2A Super Bowl and a 13-0 record that season. The program went on to go to the Super Bowl in 2008, '09 and '10 as well, winning the latter two while sporting a record of 50-2 from 2007-10. We didn't know it at the time, but the comeback over Classical essentially kick started the greatest run in program history.

Honorable mention: Rockport softball's late comeback leads to first-ever win over Amesbury in 2012; Gloucester softball rallies for three runs in the bottom of the seventh to beat Dracut, 5-4, in extras in the 2018 Division 2 North quarterfinal.

Zero first downs. No trips past the 50-yard line. Minus-5 yards of offense. Ball possession for just 5 minutes and 40 seconds out of a possible 22 minutes in the first half. And most importantly, trailing by 18 points at intermission.

Not even the most loyal and diehard Orange-and-Black fan could have honestly believed the Panthers could come back and pull off an upset for the ages against Billerica on this chilly Friday night. Nothing they had done on either side of the ball in the first half suggested so; reversing the script 180 degrees seemed as likely as ... well, a 25-point comeback late in the third quarter of a Super Bowl against Atlanta. Never happen, right?

But with head coach Andrew Morency preaching 'focus only on the next play' and staying committed to the run game, Beverly did the unthinkable. A 26-yard touchdown run by Sam Abate on 4th-and-1 and an extra point by Luke Samperi on the opening series of the second half got things started for BHS. That was followed by a flea flicker, with Keith Chouinard tossing the ball back to quarterback Kevin Morency, who then found Abate wide open downfield, to cut the deficit to five late in the stanza.

A booming Samperi punt in the fourth quarter resulted in a Billerica fumble on its own 20 and a recovery by Beverly's Johnny Jones. Five plays later, Abate went in from five yards out to give his squad a remarkable one-point lead. A last-second field goal attempt by the Indians came up short, and one of the greatest victories in Beverly High football history was officially complete.

It's not so much the comeback — Bishop Fenwick's Division 3 North champs had a lot of those in this tourney run — but who it came against: down multiple runs with one out to go and Saugus' Todd Tringale pitching. The way the Northeastern Conference's MVP pitched last spring, the Crusaders rally is on par with the Red Sox beating Yankee Hall of Famer Mariano Rivera.

Fenwick trailed 4-0 early, but cut it to 4-2 going to its last ups. With two quick outs they seemed doomed, but Rich Pignone's pinch hit single in the No. 9 hole kept it alive. The top of the order delivered three straight singles by Angelo McCullough, Keegan O'Connor (a close call on the throw to first) and finally Trey Deloury's two-run hit for a 5-4 Fenwick final.

The Black-and-Gold were behind in every tournament game they played in 2019, rallying to top Swampscott and Lynnfield to capture the North crown before ultimately falling in the state semis. Memorable rallies, for sure, but there's no drama quite like watching a team try to stay alive against the area's best arm. Down to the final out, there's a pit-in-the-stomach feeling with every pitch, since it could be the end; somehow, some way, Fenwick made sure it wasn't.

Any lead in soccer is a good one; and when it comes in the playoffs against stiff competition, those leads become increasingly more significant.

At the time, head coach Jared Scarpaci and his Masconomet squad had compiled 17 wins and just two losses but found themselves down 1-0 early to the defending state champions from Concord-Carlisle. Instead of resting on their laurels and caving against an uber-talented opponent in brutal conditions, the Chieftains embraced a "next five minutes" mentality to quickly climb back into the game. It was a mindset that had helped them battle back or stay in front time and time again all season long. This particular playoff bout was no different.

Matt Dzwil headed home the equalizer on a feed from Connor Fitzgerald just minutes after C-C had seized the league. Then, with the score still knotted at 1 about six minutes into the second half, Devin Ralph dropped one home to give his team the lead for good. It was as intense a soccer game I've ever seen from there, but a stout defensive effort until the final whistle allowed Masco to prevail.

The Chieftains would fall to Arlington days later in the sectional championship, but it was an incredible season nonetheless and they'll always have that comeback triumph to look back on.