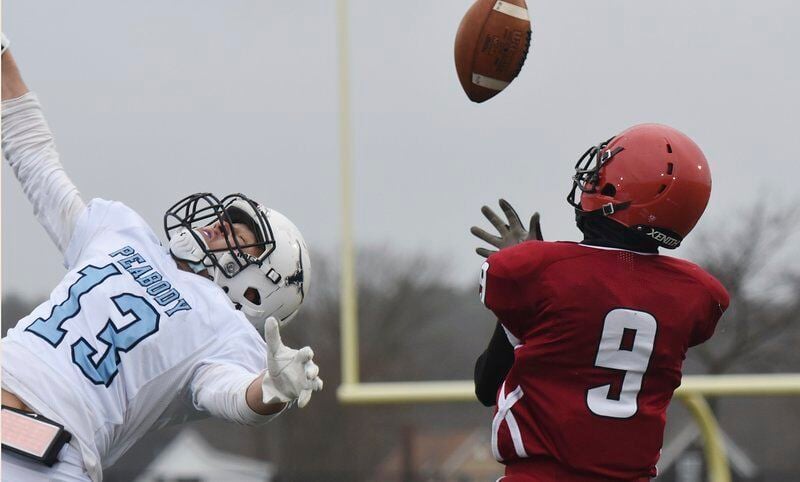 PAUL BILODEAU/Staff photoGloucester's Aidan Cornetta (9) looks to haul in a pass but it is tipped away by Peabody's Brandon Pszenny in Friday's game at Newell Stadium. 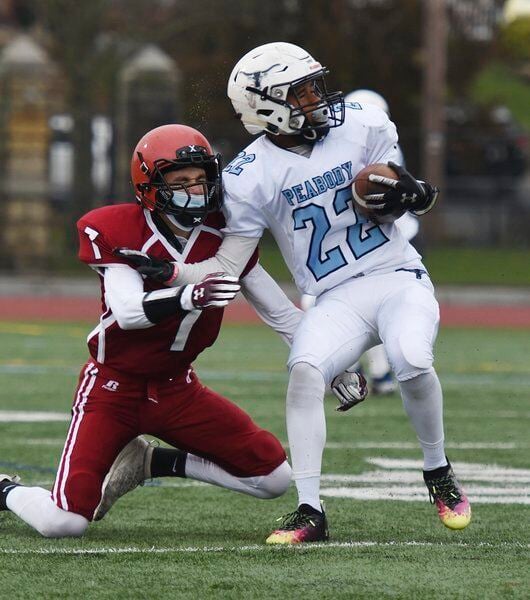 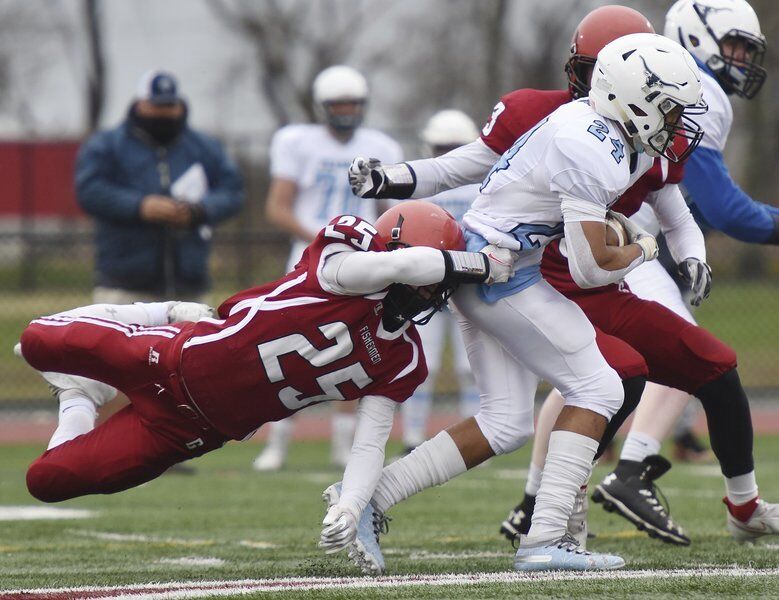 PAUL BILODEAU/Staff photoCaleb DeCoste (25) and the Fishermen are looking to take down Danvers on the road Friday night. 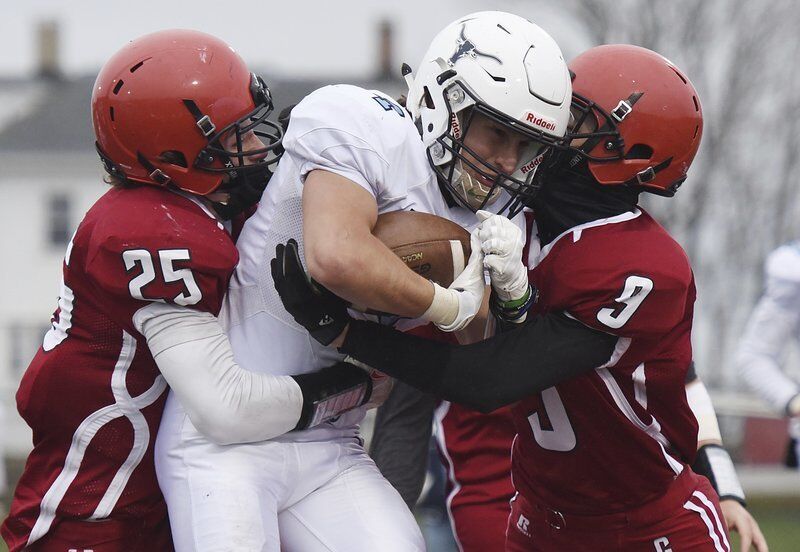 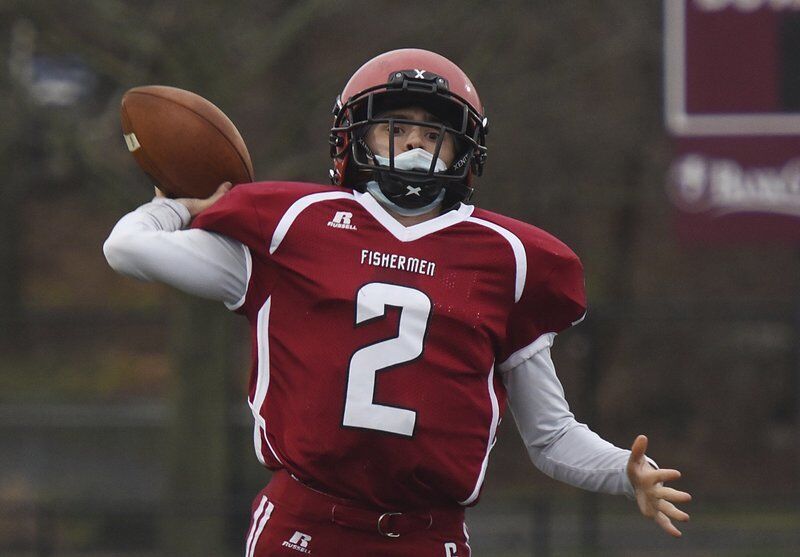 PAUL BILODEAU/Staff photoGloucester's Aidan Cornetta (9) looks to haul in a pass but it is tipped away by Peabody's Brandon Pszenny in Friday's game at Newell Stadium.

PAUL BILODEAU/Staff photoCaleb DeCoste (25) and the Fishermen are looking to take down Danvers on the road Friday night.

The Gloucester football team's lack of numbers and depth finally caught up them in Friday night's game against Peabody.

The Fishermen were severely shorthanded with injuries, especially on the line, and against a deep Tanners team with a lot of size up front, the game was a mismatch. Peabody scored on its first five possessions and never looked back en route to a 41-0 win at Newell Stadium.

"Against a team that talented and that well coached you have to go in with your full slate of players," Gloucester head coach Dan O'Connor said. "Obviously for various reasons we didn't have that and we're not going to have that next week either. So we have one more week to do what we have to do with who we got."

Peabody's size and athleticism were too much for Gloucester to handle from the opening kickoff.

The Fishermen were only able to accumulate 31 yards of total offense and just four first downs - one via penalty - on the game. Gloucester tried to run inside and out, but the Tanners defense was all over the ball carrier before he could get going, holding the Fishermen to eight yards rushing on the day. In the passing game, Peabody had Gloucester's receivers tightly covered, allowing only 23 yards and three completions while Brandon Pszenny and Jack O'Hara each had an interception.

"That's a tough place to play so any time you ca shut Gloucester out here it means something," Peabody head coach Mark Bettencourt said.

O'Connor was quick to credit the Peabody front seven.

"They're an active defensive front and we knew that, we just weren't able to pick the places we need to be and get there," O'Connor said. "We have some inexperience on the line and those players are going to be good players but they're still learning."

When the Tanners had the ball they were able to chew up yards, primarily through the passing game. Sophomore quarterback Shea Lynch had a big game with 267 yards on 13 completions.

Lynch was finding receivers all over the field as he hit Drew Lucas up the seam for a 21-yard strike to open the scoring and give Peabody a 7-0 lead. On the ensuing drive, Cam Cuzzi's one-yard touchdown run was set up by Lynch's 17-yard completion to O'Hara down to the one.

The Tanners signal caller struck again on Peabody's next drive, hitting Brandon Pszenny, who had a game-high 82 yards receiving, for a 27-yard touchdown down the left sideline to make it 21-0 in the second quarter. On the next drive, Lynch hit three straight passes of more than 20-yards to set up a Jonathan Teixeira 1-yard run to take the Tanners into the half with a 28-0 lead.

Finally, he hit Lynch on a post route for a 66-yard touchdown pass in the first drive of the third quarter, giving the Tanners five touchdowns in five drives. Eli Batista was also a key target in the passing game as he hauled in five passes for 80 yards.

"We picked our spots and made our hits (in the passing game) when the wind was low," Bettencourt said. "We saw some things on film, threw some formations out to see if we were right and when we saw what we liked we were able to play some pitch and catch."

Backup quarterback Alex Silva capped off the scoring with a six-yard run in the fourth quarter.

"They hit a few nice plays and we had a few miscommunications on the back end," O'Connor said. "They beat us a couple times on the same plays and that's something we practiced but we need to communicate it better and coach it better."

Gloucester finishes up the season next Friday night at Danvers (5 p.m.), its traditional Thanksgiving Day opponent.