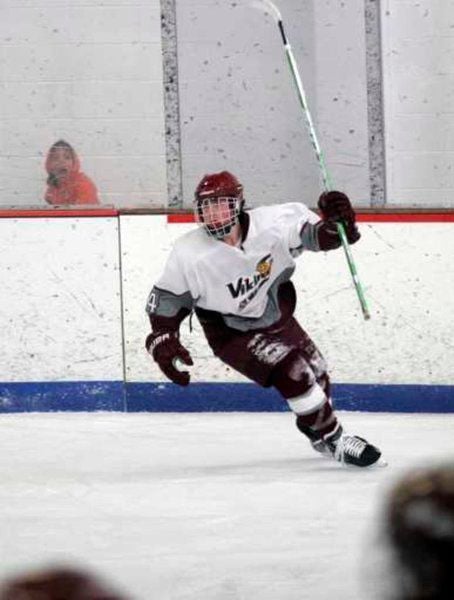 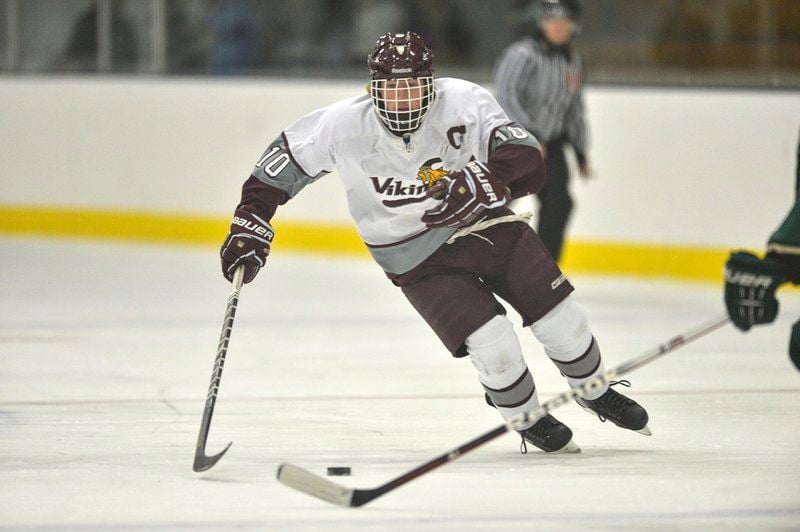 Staff File PhotoConor Douglass was a 100 point scorer for the Vikings this decade. 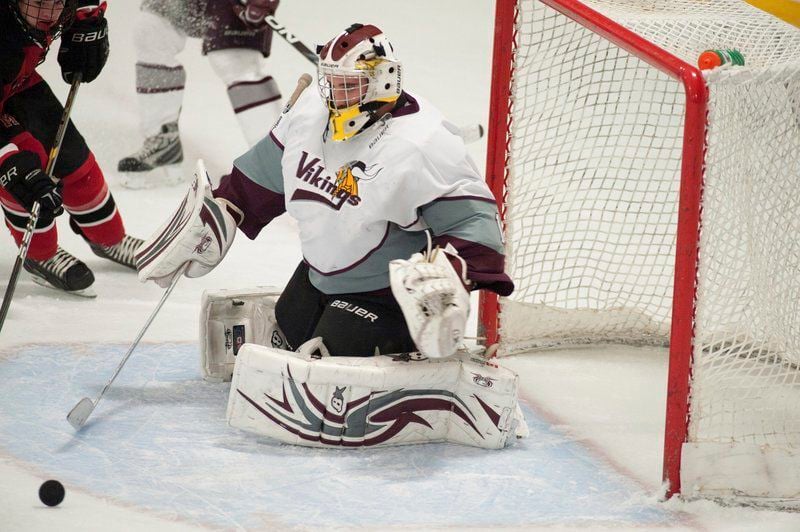 Staff File PhotoColby Foster picked up 44 wins in goal for Rockport in his four years in net. 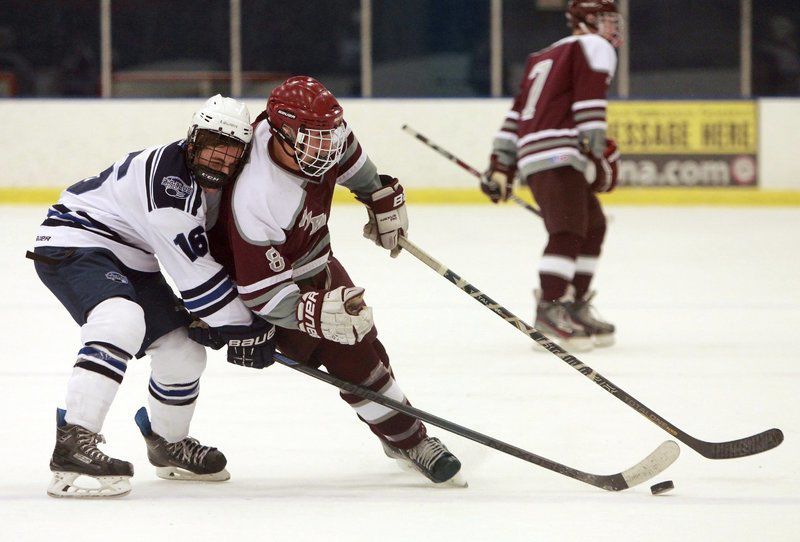 Staff File PhotoKyle Nelson was a four-year varsity player that switched between forward and defense. 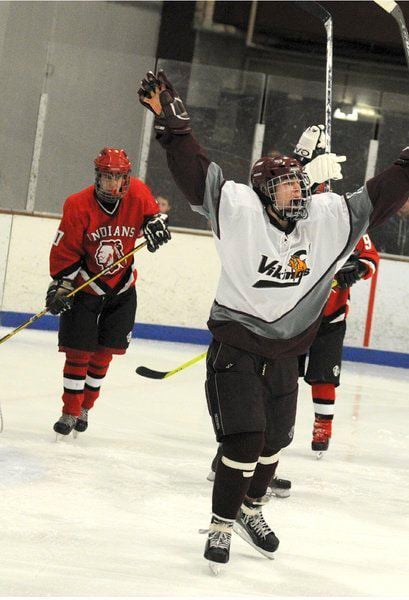 Staff File PhotoCam Smith was a 100 point scorer for the Vikings and scored a decade best 47 points in 2012.

Staff File PhotoConor Douglass was a 100 point scorer for the Vikings this decade.

Staff File PhotoColby Foster picked up 44 wins in goal for Rockport in his four years in net.

Staff File PhotoKyle Nelson was a four-year varsity player that switched between forward and defense.

Staff File PhotoCam Smith was a 100 point scorer for the Vikings and scored a decade best 47 points in 2012.

The Rockport hockey team was a very consistent presence in the Commonwealth Athletic Conference. The program had its share of up and down seasons over the last 10 seasons but were competitive with all comers through it all.

From 2011-2020, the Vikings reached the postseason four times and peaked with a trip to the Division 3 North Semifinals in 2012.

This is Rockport hockey's All Decade team.

Alex Amoroso (2013)- A talented playmaker, Amoroso's 22 assists in 2013 are tied for the most in a single season this decade. A three-year varsity performer, Amoroso worked his way up to a top six forward in his junior and senior seasons and was highly effective. His speed and ice vision saw him setting up teammates all over the offensive zone in his senior year en route to an All-Star season.

Conor Douglass (2013)- One of two 100 point scorers this decade, Douglass was a top six forward from the time he jumped into varsity action as an eighth grader. A gifted offensive player that could finish, pass and skate with the best of them, Douglass was more than a point per game player in his final three varsity seasons, ending his career with 105 points after his senior year was cut short at midseason due to an injury.

Andrew Guelli (2020)- Guelli was at the forefront of Rockport's resurgence this winter, leading the team to its first state tournament berth in seven seasons. Guelli was a three-year varsity player, starting as a freshman, sophomore and senior while taking off his junior season. As a senior, he took his game to another level with a team-high 21 points on a team-high 11 goals as he was a threat to score from anywhere in the offensive zone.

Josh Guertin (2013)- A battle tested varsity player who played in the state tournament in all four years of his varsity career. Guertin rose up the ranks until he became a standout top six forward in his junior and senior seasons, where he scored 45 points. An all around offensive player, Guertin was efficient in every way in the offensive zone as he could pass, shoot and dig pucks out of the corner to keep his team on the attack.

Jameson Kamm (2017)- A wildly consistent four-year varsity performer, Kamm was a point per game player and one of Rockport's top two scorers as both a junior and a senior, leading the team with 21 points in 2017. Kamm was a three zone player that was always making good decisions. He also had a knack for finishing around the net, which led to a spot on the Commonwealth Athletic Conference All-Star team in his final two seasons.

Anthony Lange (2016)- Another very consistent four-year varsity player, Lange was a complete player that did not always put up big numbers, but was productive all over the ice. Lange was Rockport's leading scorer in 2015 and 2016 averaging nearly a point per game. He was also a valuable special teams player that was stout on the power play and incredibly effective on the penalty kill.

Jake O'Maley (2014)- O'Maley is one of those players that did not put up huge numbers, but his consistency and all around game was so valuable to the team's success. O'Maley was a top six forward in all four of his high school seasons and scored over 60 points in his career thanks to a balanced skill set and consistent production. O'Maley was also great on the forecheck and could outwork opponents to create scoring chances.

Cam Smith (2012)- Smith was the first player this decade to reach 100 career points (he finished his career with just under 120) and he did it with the best individual statistical season this decade, scoring 47 points in 2012 on a decade best 25 goals and a decade best 22 assists. Smith was a tall, power forward that played with both finesse and physicality. He was tough to knock off the puck and he was very crafty with the puck on his stick, using his length to get past defenseman and both score and create scoring chances.

Mike Tupper (2013)- An undersized but scrappy forward that gave opponents fits with both his skill and surprising physicality. Tupper was more than a point per game player and a top line forward in his final three. He finished his high school career with 91 points, 86 of those coming in his sophomore, junior and senior seasons combined. A fierce competitor, Tupper played with an edge and toughness that saw him take on much bigger players and score in many different ways.

Chris DiFluri (2016)- A four year player on the blue line, DiFluri was a complete player. He was outstanding in his own zone and great at keeping the area in front of his net clean while not afraid to mix it up in the corners. He was also a very talented skater who could get the puck out of harms way with his quick decision making and jump into the offensive rush with his skating ability. DiFluri was a top pairing D-man in his sophomore, junior and senior seasons.

Jonathan Ferrante (2014)- An offensive minded defenseman that was still very good in his own end, Ferrante was an exciting player thanks to his great skating ability and slick passing skills. Ferrante was especially strong at moving the puck through the neutral zone and transitioning from offense to defense. He was elite on the blue line in power play situations and he played some forward as well, leading Rockport in scoring in his senior season with over 20 points.

Kyle Khani (2020)- A four-year varsity blue liner, Khani is a puck moving defenseman that logged big minutes in his varsity career. Khani was great at taking care of the puck in his own zone and shutting down opposing offenses. He also had an offensive element to his game. Although he was not a high scorer on the stat sheet, Khani was great at flipping the ice from his own zone into the opponents zone thanks to his fluid skating and great decision making.

Kyle Nelson (2015)- The Vikings' current varsity head coach was also a heck of a player in his day. Splitting his time between forward and defense in his high school career, Nelson was potent at both positions and could have landed on this team at either spot. Nelson opened up his high school career as a stay at home defenseman in his freshman season, but his offensive role expanded with each season. A good skater and smart passer, Nelson led Rockport in scoring during the 2015 season.

Colby Foster (2013)- A tall net minder that took up a lot of space, Foster could dominate games with his combination of talent and positional awareness. Foster helped the Vikings reach the state tournament in each of his four seasons as starting goalie and won 44 games in that time span. Three times Foster had a goals against average under 2.65 and it did it with superior positioning. Foster was always in the right spot to make the save and he frequently made saves that most goalies could not make.

Max Kivekas (2019)- An athletic goalie with cat-like reflexes, Kivekas played on some struggling teams but kept them in every game with his prowess in between the pipes. Kivekas had uncanny lateral movement as he could move from post to post in a flash and shut of high quality scoring chances. He had command of the crease and was great at controlling rebounds while standing tall against any kind of pressure the opposing offense threw his way.