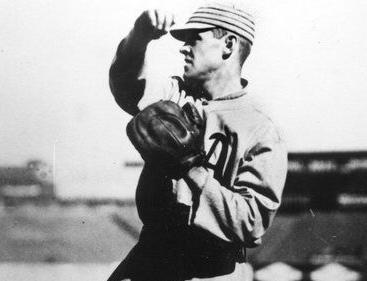 His career spanned from 1909-1927 and George expertly laid out his statistics against those that played in his era, which is known as the Dead Ball Era.

When it comes to the MLB Hall of Fame, it's a numbers game. Stats matter, and they matter in a big way, and Stuffy certainly has the stats worthy enough to be enshrined as one of the game's all time greats.

McInnis may be the best first baseman to play in the Dead Ball Era, and his numbers not only hold up in that time frame, they hold up against some more modern players as well, players who have endless highlight packages to help out their causes, something McInnis never had on his side.

Craig Biggio is in the Hall of Fame with a .281 career average only because he produced 3,000 hits in his 20 year career, where he had the luxury of playing a 162 game season compared to a 154 game season for McInnis. Biggio played in nearly 700 more games than McInnis and he was rewarded for it.

Jack Morris may be a pitcher, but he sports a career earned run average 3.90. He also gets in for longevity (254 career wins) and a stellar postseason record, which included a World Series MVP in 1991. But Stuffy has more rings, four to be exact, and a much more consistent career.

Recently the MLB Era's Committee voted in Harold Baines, a career .289 hitter who played designated hitter for the vast majority of his career. Yes Baines had 384 homers, but that falls short of those Hall of Fame "benchmarks" or 400, and in recent years 500 career homers.

The one stat that sticks out that may hurt his chances is his 20 career home runs. But he also has over 1,000 RBIs to go along with it, proving that he could be an elite run producer without leaving the yard.

There are plenty of players in the Hall of Fame that are not known for their ability to hit home runs, and Stuffy has better numbers than a lot of them.

The average number of hits for a MLB Hall of Famer is 2,416; McInnis is just shy of that with 2,406 but he has more hits than guys such as Alan Trammell, Enos Slaughter, Ryne Sandberg and Barry Larkin. All players who are not known for being elite sluggers. He has more career RBI than all of them but Sandberg as well and a better career batting average than all of them.

The average batting average for a Hall of Famer is .302, McInnis was a career .308 hitter. That's a higher average than non-power hitters such as George Brett, Paul Molitor, Roberto Alomar and Joe Cronin.

And that's before mentioning his defense, which was elite and would have garnered multiple Gold Glove awards if those were given out in the early 20th Century.

It seems the things holding Stuffy back are his home run total and the fact that he did not reach 3,000 career hits. That's preposterous because the rest of his numbers stack up against Hall of Fame players.

So if there's room for guys like Biggio and Morris, there has to be room for Gloucester's greatest athlete too. He's more than earned it.

Let's hope the MLB Era's Committee sees that and finally enshrines a deserving player that has flown under the radar for nearly a century.