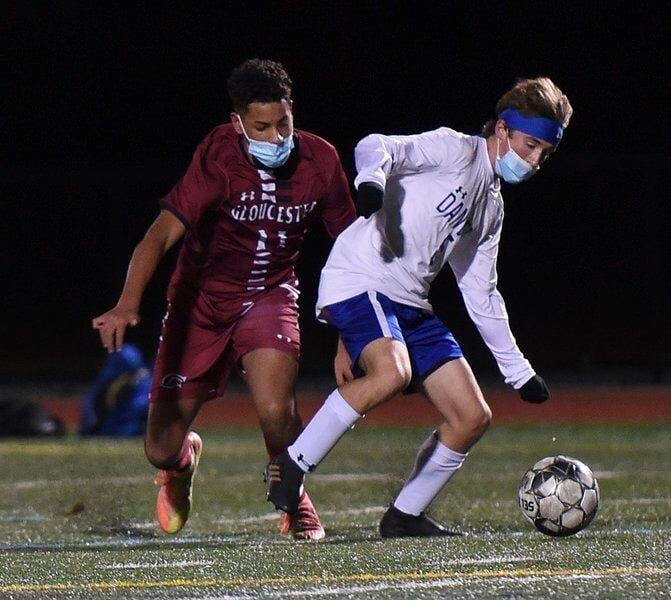 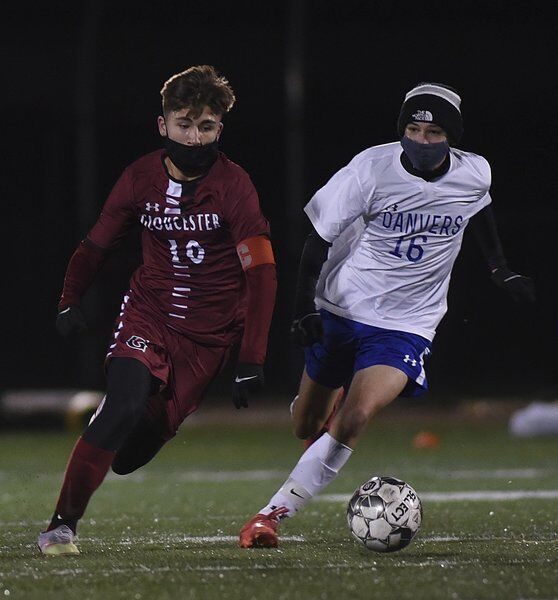 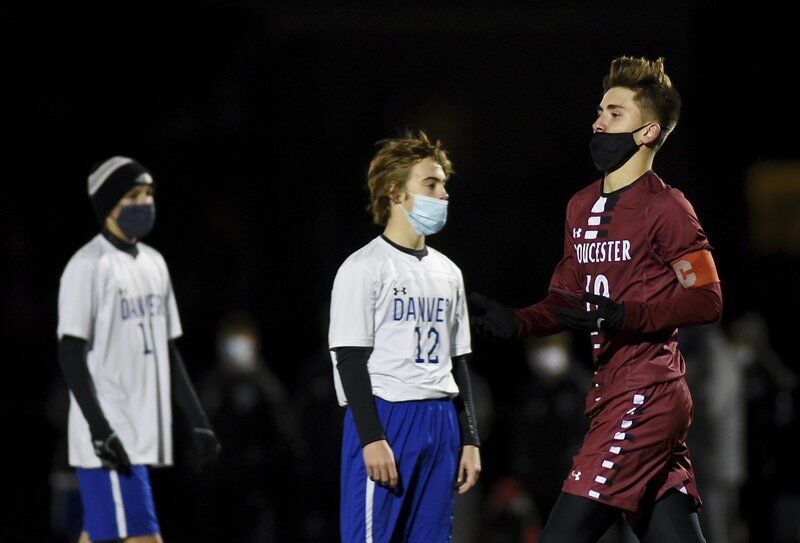 PAUL BILODEAU/Staff photoloucester’s Andrew Coelho, right, runs towards his teammates after scoring the second goal of the game during the Fishermens’ game against the Falcons at Newell Stadium in Gloucester. 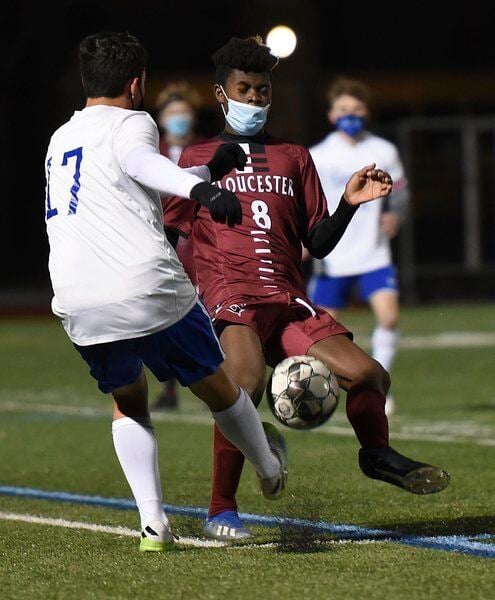 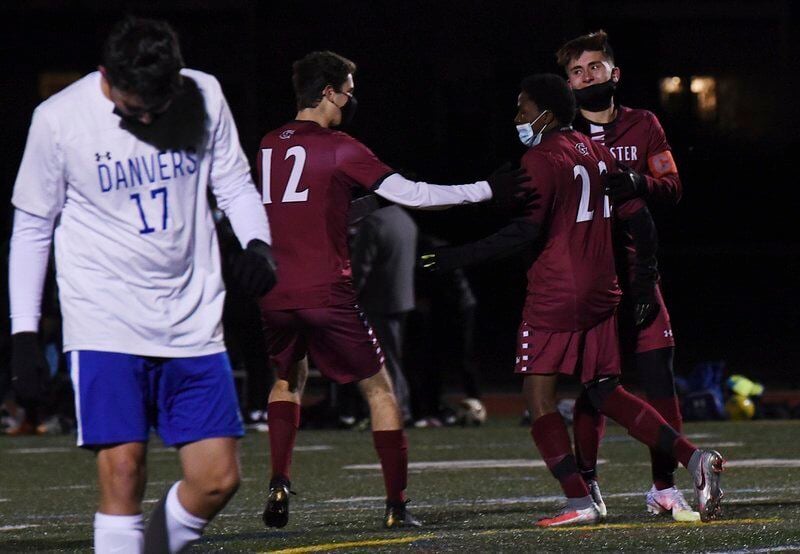 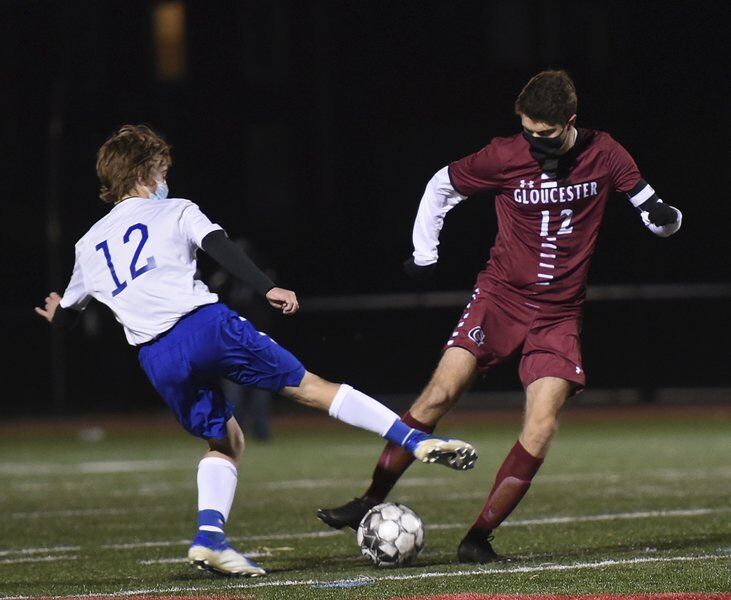 PAUL BILODEAU/Staff photoloucester’s Andrew Coelho, right, runs towards his teammates after scoring the second goal of the game during the Fishermens’ game against the Falcons at Newell Stadium in Gloucester.

Tuesday night’s Northeastern Conference clash between Gloucester and Danvers looked a lot like the first meeting between the two rivals.

Just like the first meeting, Gloucester broke out to an early lead only to see Danvers even things out a bit territorially by halftime.

But unlike the first meeting, where Gloucester hung on for a one-goal win, Gloucester made sure the Falcons never got back in the game. The Fishermen scored early in the second half and ran with momentum from there en route to a 4-1 win at Newell Stadium.

“We got up early again and Danvers battled back again in the second quarter,” Gloucester head coach Armando Marnoto said. “They were really coming at us and at halftime I challenged the team to match (Danvers’) physicality and they did that. We got an early goal and controlled the rest of the way.”

While Danvers went into the break with a little momentum after a strong second frame, trailing by just a goal, Gloucester took it back after junior Andrew Coelho scored his second of two goals on the night to give Gloucester a 3-1 lead. Coelho was well defended on the play, but he was able to muscle his way past two Falcons backs before sliding a shot inside the right post.

“We came out strong in the second half and really started to play our game,” Coelho said. “Once we got that momentum we made sure we got the job done and closed it out with good defense.”

Danvers tried to press and pick up the aggression from there, but the Gloucester defense, led by Jack Patten, Aidan Almeida and Gerson Tiul Rax were all over everything thrown their way, forcing Danvers into low percentage shots and shutting off the box.

The Fishermen essentially put it away in the middle of the fourth when Kayka Barbosa slid a pass from right post to left post, where Gino Tripoli knocked it home for a 4-1 lead.

“We’re playing really well as a team right now,” Coelho said. “It’s good to get another win on our home field and we are hoping to finish strong in the next two.”

Gloucester set the tone early on with a pair of goals in the opening four minutes.

In the third minute, Coelho hit senior Robert Mugabe in stride with a perfect through ball and Mugabe put it into the top left corner after gaining a step on the defense to make it 1-0.

Just over a minute later, Coelho got the ball on the left wing and blew by a defender before crushing a shot inside the near post for a 2-0 win.

“Andrew has so much skill and he has multiple goal potential in every game,” Marnoto said. “He showed his speed tonight on the first goal and then his strength on the second to bull his way in their. Both were well defended and he was able to get it through.”

Danvers got some momentum back in the second frame as Thomas Lisi cut the Gloucester lead to 2-1 when he redirected a cross from the left wing. But Gloucester went on to control the second half and kept Danvers at bay the rest of the night.