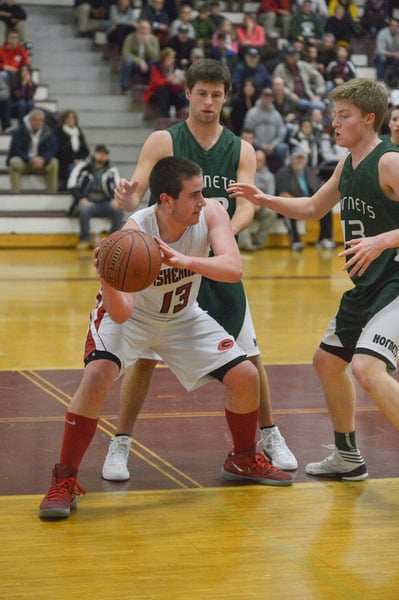 Gloucester's Connor Adkins passes out of the low past as Dylan Estes and Taylor Ketchum (right) of Manchester Essex provide the defense in the BankGloucester Holiday Tournament final Saturday at the Benjamin A. Smith Fieldhouse. Manchester Essex won the game 69-57 and the tournament. 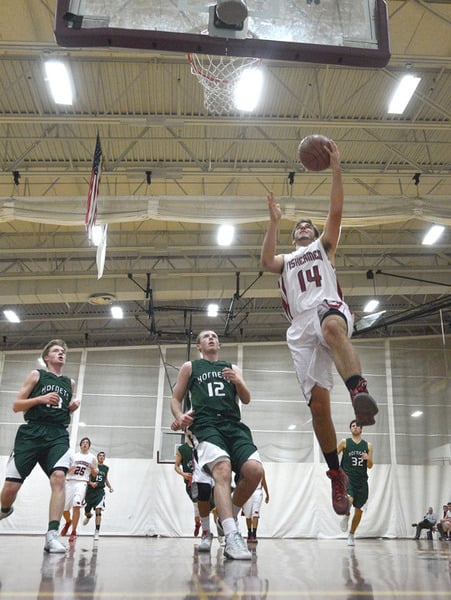 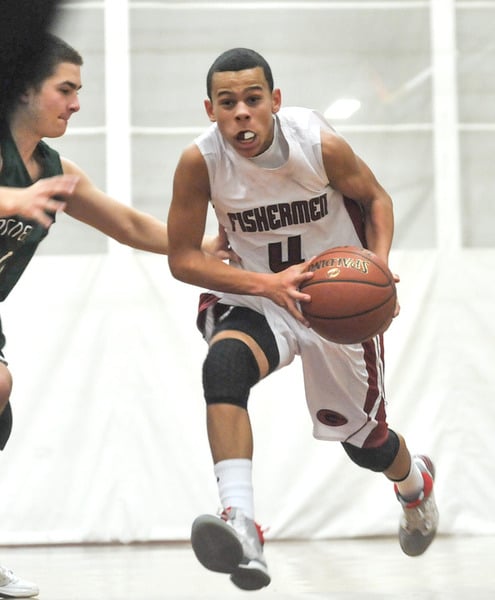 Gloucester's Connor Adkins passes out of the low past as Dylan Estes and Taylor Ketchum (right) of Manchester Essex provide the defense in the BankGloucester Holiday Tournament final Saturday at the Benjamin A. Smith Fieldhouse. Manchester Essex won the game 69-57 and the tournament.

The Fishermen came out ready for the Hornets 2-3 zone and scored almost at will over the game’s first eight minutes thanks to great ball movement and the hot shooting of guards Austin Davis and Jeff Oliveria.

Gloucester built a 22-9 lead after one quarter of play, and that’s when Manchester Essex head coach Bryan Shields made a few adjustments.

The Hornets ditched the 2-3 in favor of a man-to-man scheme that featured an aggressive full court press and trap and as a result the Fishermen came unglued. Well executed traps in the back court led to several turnovers from the Fishermen, which led to the Hornets holding a 60-35 advantage over the final three quarters of play en route to a 69-57 win and the BankGloucester Holiday Tournament title at the Benjamin A. Smith Fieldhouse.

“(Gloucester) really came out strong against the 2-3 zone,” Shields said. “We just decided that we were going to man up and press in the full court to force some turnovers and make things happen to get back in the game. We had a good read on what some of their guys like to do, who goes left and who goes right. I thought our double teams and rotations were really good.”

“They started to run and jump our guards and the inexperience showed a bit and we threw the ball away a few times,” Cahill said. “Give them credit, they played a good game. I’m going to give us credit too because I liked how we played hard until the end and I thought we definitely did some good things, especially against the zone early. But our inexperience showed when they started to pressure us.”

Manchester Essex (2-3) began to claw its way back into the game in the second quarter starting off the frame on an 8-0 on back-to-back three pointers from Petey Morton to cut the Gloucester lead from 13 to five. A Max Nesbit layup tied the score at 30 with two minutes to go in the frame but Gloucester (2-4) senior captain Jason Vizena sunk a pair of shots at the end of the half to put Gloucester up 34-30 at the break.

With the Hornets holding onto a three point lead senior captain Liam Aldrich nailed two straight shots from behind the arc and converted a three point play to end the frame with nine straight points. A Morton three pointer to open the fourth quarter made it a 12-0 Hornets run and extended the lead from three points to 15 points putting an end to Gloucester’s hopes of winning the tournament.

“They hit a bunch of long three pointers, what can you do,” Cahill said. “They shot the lights out.”

Aldrich led all scorers with 21 points on the night while Nesbit had 14 points, nine rebounds and Morton had a season high 12 points. Vizena led the Fishermen with 17 points followed by Oliveria with 12 and Davis with 11.

Aldrich was named tournament MVP with teammates Nesbit and Morton joining him on the tournament all star team with Oliveria, Bishop Fenwick’s Matt Costello and Hamilton-Wenham’s Henry Eager.

“Liam brings the ball up the floor for us on just about every possession and with his size that’s not an easy job” Shields said. “But he has unbelievable speed which helps him a ton and more heart than I’ve seen in any basketball player and I can appreciate that and I think that’s why he’s such a worthy MVP.”