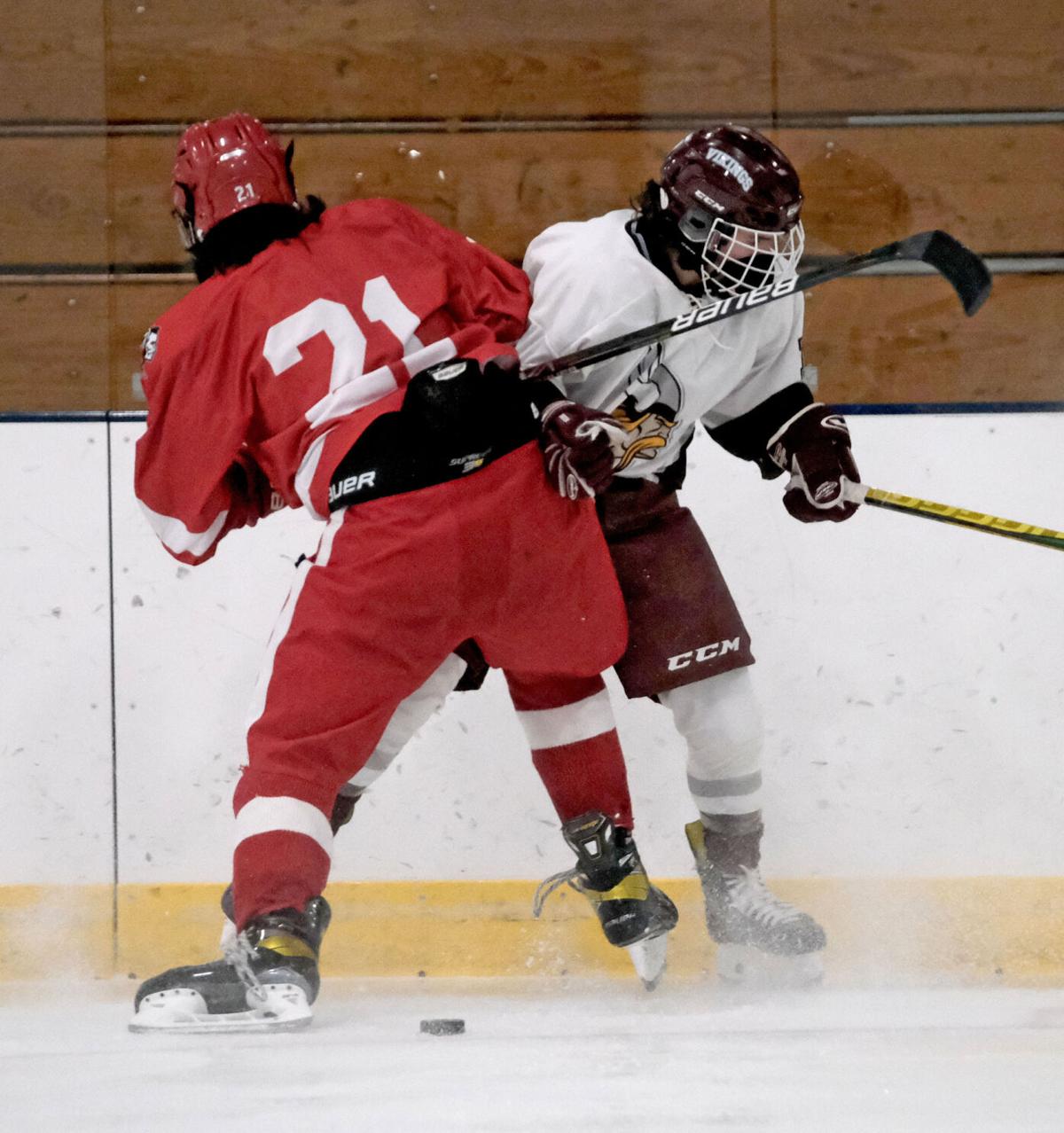 Amesbury’s Brodie Marcotte and Rockport’s Michael Murphy battle for possession along the boards. 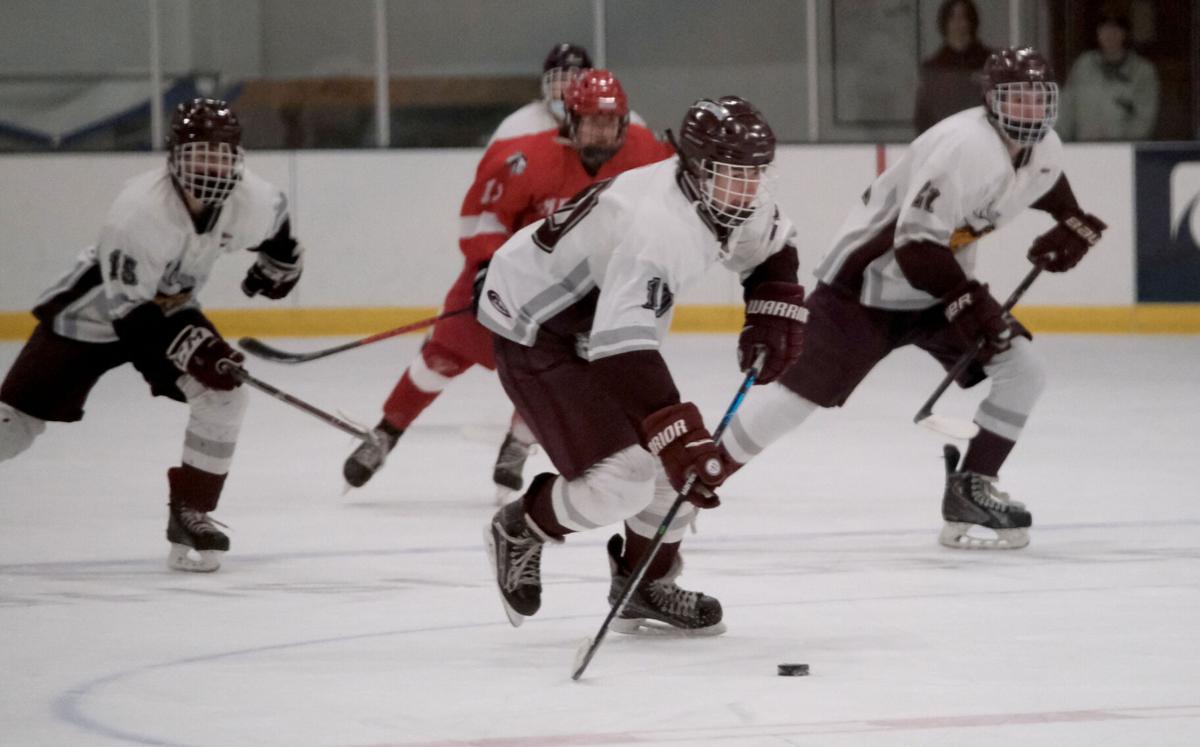 Rockport’s Aiden Arnold breaks out with teammates during their game with Amesbury in Gloucester Wednesday night. 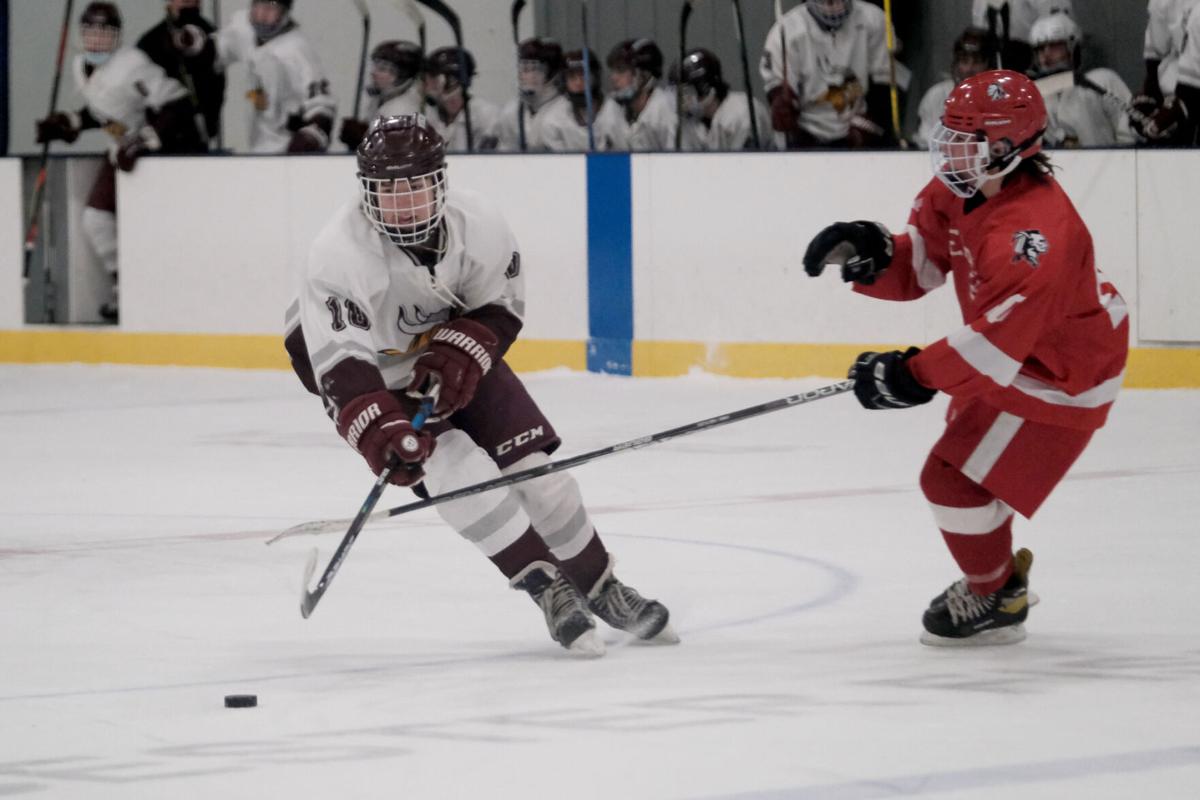 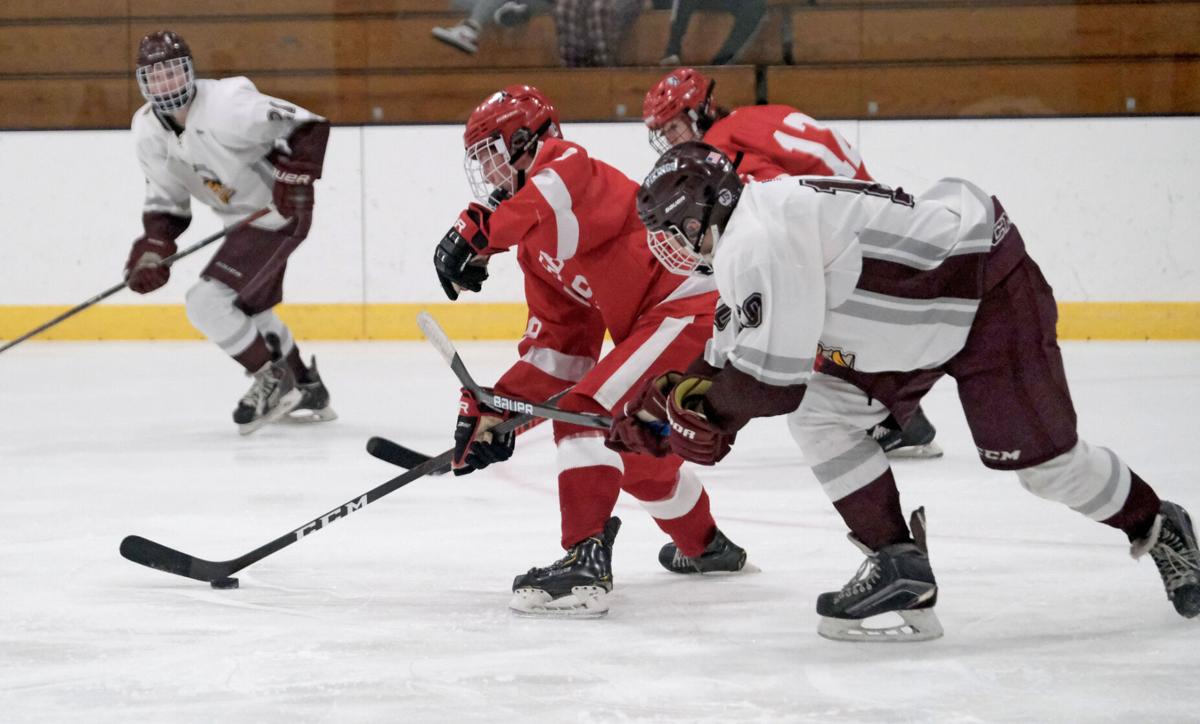 Amesbury’s Ian Pelletier looks to pass as Rockport’s Aiden Arnold moves in during Wednesday’s game at the Talbot Rink. 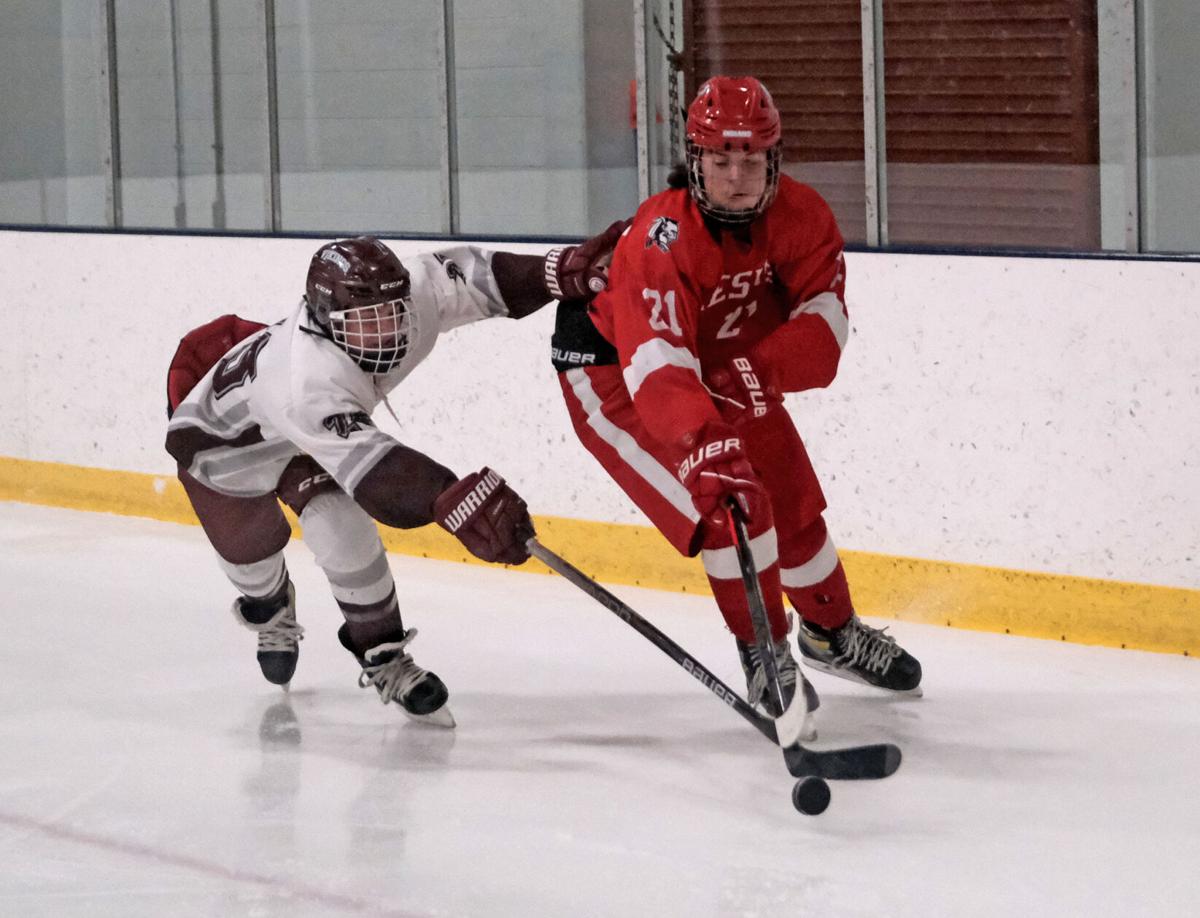 Rockport’s Quinn Brady tries to get the puck away from Amesbury’s Brodie Marcotte. 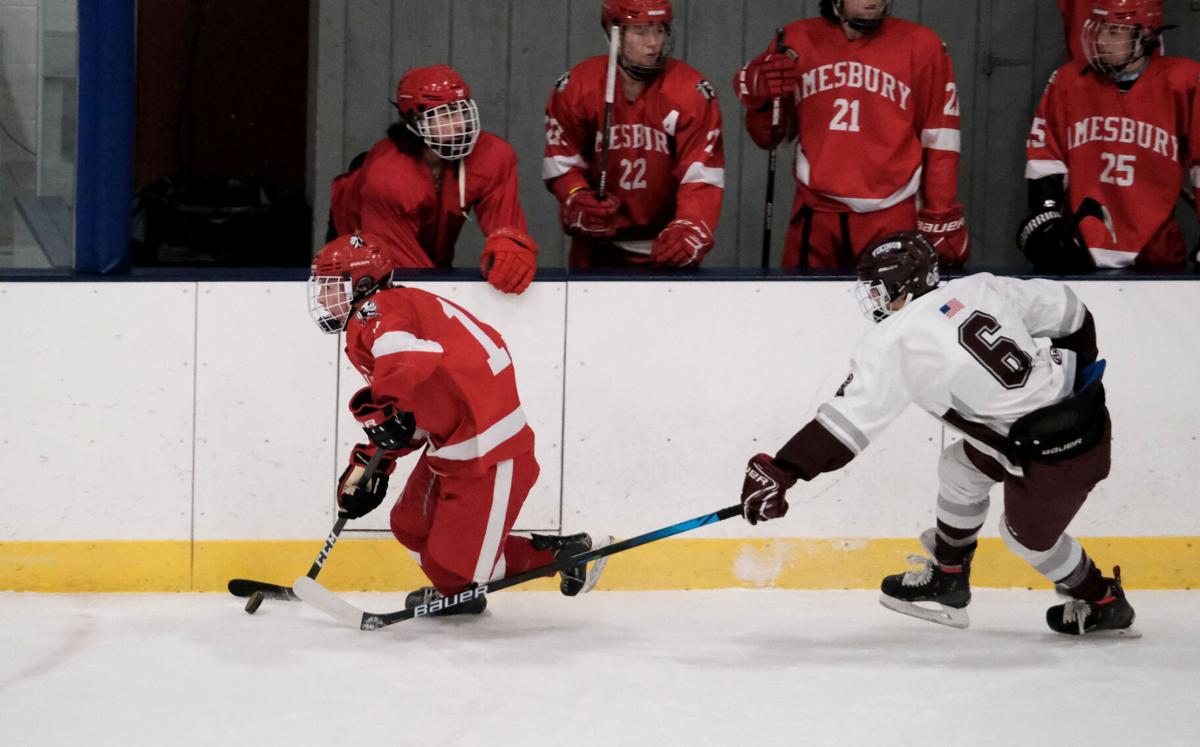 Amesbury’s Brodie Marcotte and Rockport’s Michael Murphy battle for possession along the boards.

Rockport’s Aiden Arnold breaks out with teammates during their game with Amesbury in Gloucester Wednesday night.

Amesbury’s Ian Pelletier looks to pass as Rockport’s Aiden Arnold moves in during Wednesday’s game at the Talbot Rink.

Rockport’s Quinn Brady tries to get the puck away from Amesbury’s Brodie Marcotte.

With both the Rockport and Amesbury hockey teams entering Wednesday’s Cape Ann League Baker Division contest sporting matching 2-4 records, the game was a big one for both teams to move closer to the .500 mark, and both teams played like it.

It was a physical grind where goals and space on the ice were tough to come by, but a second period goal from the Indians was all their goalie, Trey Marcotte, needed in a 1-0 win at the Talbot Rink.

“We needed this one, both to get closer to .500 and to get a win in the league,” Amesbury head coach Steve Costa said. “Rockport is a strong forechecking team and they came on strong late, but Trey was great in goal. Our defense and goaltending came through in this one.”

The Vikings (2-5) were seeing their first action in 15 days and they needed a little while to get their legs under them. Amesbury (3-4) controlled the action early with a 13-3 edge in shots on goal over the first 15 minutes and an advantage in the physical play. But Rockport goalie Jack Crompton was also on his game and turned aside every shot he faced in the opening frame. His two best stops came in the opening minutes with a right pad save on a breakaway chance and the ensuing rebound to keep it scoreless.

“We haven’t played in a couple weeks and the rust showed early,” Nelson said. “Jack kept us in it after one. But I thought we settled in and applied a lot of pressure from there. We just couldn’t put one in.”

The Indians found the back of the net at 4:18 of the first period with what turned out to be the game winning goal off the stick of Brady Burnham. Nathan Brown gathered the puck after a failed Rockport clear attempt and found Burnham on the left wall, who scored top shelf with a backhand shot low on the left circle for the game’s lone goal.

“That was a great shot,” Costa said. “We needed to bury a few more of those but this is a young team that’s still learning how to put teams away. Rockport played well after we took the lead but our defense held strong.”

After falling behind, the Vikings really stepped up their play and controlled the action over the final 25 minutes of play, evening out the shots on goal by the end of the game with 28 a piece.

Rockport had several chances both on the rush and due to nice puck movement in the offensive zone, but Marcotte was all over everything with 28 saves including 25 over the final two periods of play.

As the game wore on, Rockport continued to pressure but just could not find the space to get the equalizer despite a few solid chances with the net empty in the waning minutes. Rockport cycled the puck with with the extra attacker on the ice and had a couple quality chances that Marcotte turned aside.

Nelson was quick to credit the Amesbury goalie for his performance.

“We got the traffic in front we needed but (Marcotte) did a good job handling anything low and forcing a face-off instead of giving us a second chance opportunity,” Nelson said. “We played a good final two periods. We did a much better job finishing our checks and it showed. We forced more turnovers and got more shots.”

The Vikings return to action on Saturday back at Talbot Rink against Shawsheen (7 p.m.). Amesbury, on the other hand, is right back in action on Thursday at Methuen (7 p.m.).