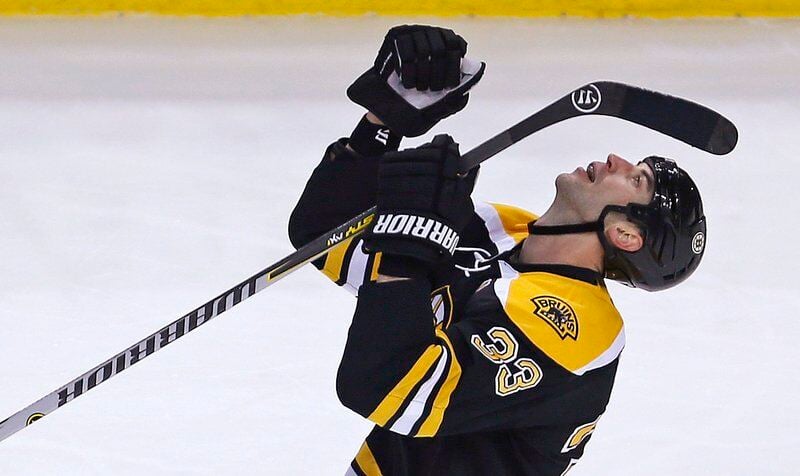 (AP File Photo/Charles Krupa)What Zdeno Chara brought to the Boston Bruins in his 14 seasons as team captain and defensive lynchpin will be impossible to replace. 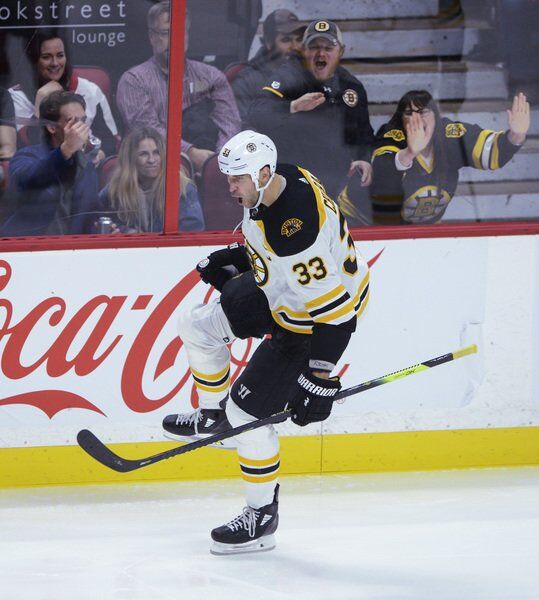 (Sean Kilpatrick/The Canadian Press via AP)After 14 seasons on Boston’s blue line and as its team captain, Zdeno Chara has left the Bruins to sign a one-year deal with the Washington Capitals.

(AP File Photo/Charles Krupa)What Zdeno Chara brought to the Boston Bruins in his 14 seasons as team captain and defensive lynchpin will be impossible to replace.

(Sean Kilpatrick/The Canadian Press via AP)After 14 seasons on Boston’s blue line and as its team captain, Zdeno Chara has left the Bruins to sign a one-year deal with the Washington Capitals.

While it might be difficult to remember, there’s a time when Zdeno Chara wasn’t a member of the Boston Bruins.

It’s even more difficult to wrap your head around the fact that the 43-year-old blueline behemoth won’t be ending his illustrious NHL career in a black-and-gold sweater.

Chara, the 6-foot-9 defenseman who served as Boston’s captain for all 14 of his seasons with the organization, announced via Instagram Thursday that he was signing a one-year, $795,000 with the Washington Capitals.

“My family and I have been so fortunate to call the great city of Boston our home for over 14 years,” Chara wrote on the social media platform. “Recently, The Boston Bruins informed me that they plan to move forward with their many younger and talented players and I respect their decision. Unfortunately, my time as proud Captain of the Bruins has come to an end.”

A free agent since the Bruins were eliminated by eventual Stanley Cup champion Tampa Bay the second round of the playoffs this past summer, Chara leaves a huge void — physically, emotionally and size-wise — on the left side of Boston’s defense. He is the second big name departure on Boston’s depleted backline, joining power play quarterback Torey Krug, another free agent who signed for big bucks in St. Louis.

Chara joins Mookie Betts and Tom Brady as other franchise cornerstones who chose to leave Boston teams in 2020 after winning championships here for greener pastures — with Brady, like Chara, doing so in his 40’s.

In a year full of gut punches, this was one more that 2020 snuck in before the calendar finally fiips.

“Always a Bruin — Thank You, Boston” was displayed at the tail end of an Instagram video Chara posted, recapping his decade-and-a-half in the Hub.

What’s puzzling — and, to be honest, disturbing — is that Boston’s brass felt Chara wasn’t worth less than a million dollars to keep in town for one more season, likely the last of his Hall of Fame career. President Cam Neely mentioned less than two weeks ago on a Zoom call with reporters that the organization wants to get a good look at its defensive prospects to see what they have, and to an extent that makes sense. Jakub Zboril, Jeremy Lauzon, Urho Vaakanainen ... have at it, boys.

But at what cost? How do the Bruins justify resigning Kevan Miller — a decent 5th/6th defenseman who brings physicality, but one who hasn’t been healthy in about 18 months and hasn’t been a regular contributor since 2017-18  — when they could’ve had Chara for even less money?

How does the team replace a guy who was still a beast on the penalty kill, a guy who was on the ice for every important defensive zone faceoff, a player that those half his age feared going into the corners against? How do you replace Chara’s leadership, respect and command of the locker room?

Now, in the newly reconfigured East Division, the Bruins will have to go up against Chara and the Capitals eight times in the 56-game regular season. Let’s see how that works out.

The tallest player in NHL history (and certainly one of its most fearsome), Chara brought an expeditious presence to Boston when he was signed away from Ottawa in the summer of 2006. Almost immediately, he facilitated a culture change in the Bruins’ locker room where accountability, responsibility and acceptance became the norms.

There wasn’t anything he wouldn’t do for his brothers in black-and-gold, and they in turn loved Chara as a teammate, leader and person. He was a workout freak (man, did he love his bicycle) and became a health food nut midway through his career, prolonging it several seasons. Chara made everyone who wore the same sweater as he feel welcome in Boston’s locker room; there were no rookies, only ‘first year players’. He held court at his corner stall in the room win or lose, always giving thoughtful answers to even the most banal questions.

Befitting a man of his enormous size, Chara had a booming 100-plus mile an hour slapshot that terrorized both shot-blocking defenders and goaltenders; watching him wind up and blast one in a shootout situation on a hapless netminder was delightful. He could screen opposing keepers like no one else on the man advantage when needed, too. Puck battles out front, along the walls or in center ice almost always went in his favor.

And while he wasn’t a pugilist by nature, Chara never backed down from a challenge. While he had ‘only’ 30 fights with the Bruins (as compared to a combined 39 in eight seasons with the Islanders and Senators before that), according to hockeyfights.com, he made them count. His first, when he opened up Chicago Blackhawk enforcer David Koci’s nose with a flurry of right hands, came on the same night the Red Sox defeated Colorado in Game 2 of the 2007 World Series at Fenway Park. Chara also dropped the gloves with Donald Brashear, Georges Laraque, Peter Worrell, Chris Simon, Matthew Barnaby and Patrick Maroon, among other heavyweights.

There are two images of Chara that will be forever burned into the memory of Bruins fans: letting out a primal scream as he lifted the Stanley Cup over his head in Vancouver and knocking the newly minted ‘2011 Stanley Cup champions’ hat off his head in the process; and being introduced to an absolute defeaning roar  — in its 25-plus years, TD Garden has never been louder for any event — prior to Game 5 of the 2019 Stanley Cup Final against St. Louis, when Chara took to the ice with special facegear after deciding he was OK to play with a broken jaw. (His staring down at, and laughing in the face of, Pittsburgh’s Sidney Crosby during Boston’s 4-game sweep of the 2013 Eastern Conference Final is right up there, too).

Now he’s gone, and everything that Chara embodied about being a Bruin is gone with him.

While he’s not the player he was even three years ago, there was a role for him on this team that still has a window to win another Cup. That task just got a whole hell of a lot harder now that Chara would be there to lead them on their quest.