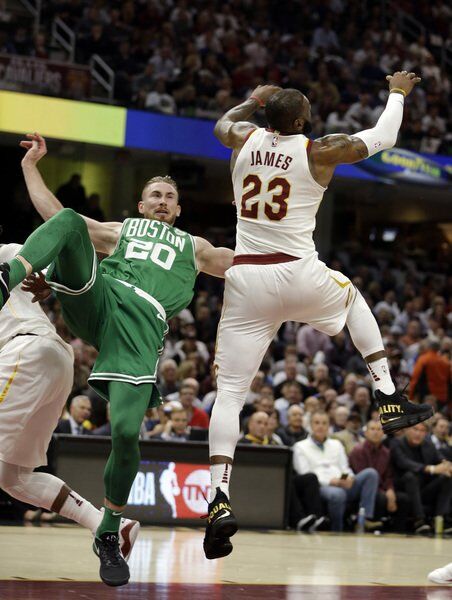 Boston Celtics' Gordon Hayward (20) falls as Cleveland Cavaliers' LeBron James (23) reaches for a loose ball in the first half of an NBA basketball game, Tuesday, Oct. 17, 2017, in Cleveland. Hayward broke his left ankle on a play. (AP Photo/Tony Dejak) 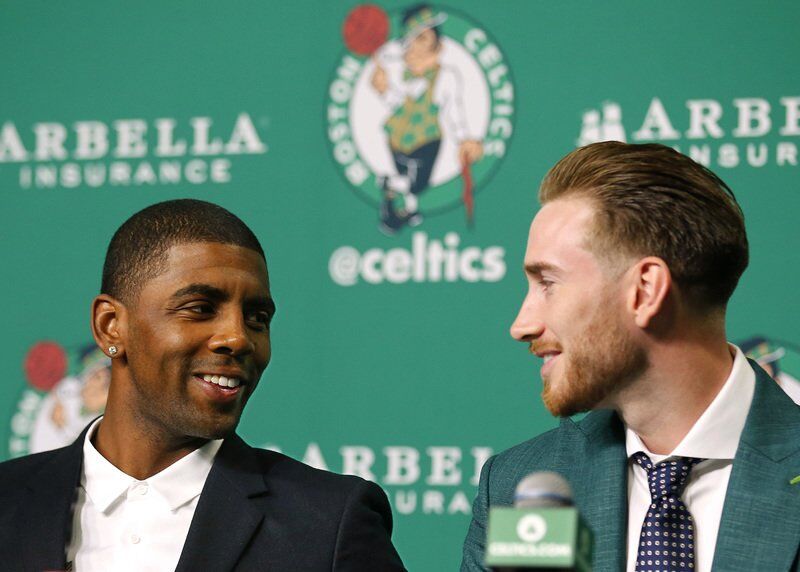 Boston Celtics' Gordon Hayward (20) falls as Cleveland Cavaliers' LeBron James (23) reaches for a loose ball in the first half of an NBA basketball game, Tuesday, Oct. 17, 2017, in Cleveland. Hayward broke his left ankle on a play. (AP Photo/Tony Dejak)

There have been a few memorable Boston Celtics press conferences at the TD Garden over the last two decades.

The hiring of Rick Pitino, which oddly seemed like a coronation, which I admit was a willing participant.

And the Kyrie Irving-Gordon Hayward presser, together, shortly after the trade for Irving and signing of Hayward. It was giggles and euphoria. Title No. 18 was closer than we thought as Danny Ainge pulled a Red Auerbach.

Basically, we got really, really excited.

Pitino never fit in here, thinking he was the next Red Auerbach and neither did Kyrie, who never bought into Celtics pride. It just wasn’t a match.

The Hayward failing, though, was a little more complex and had as much to do with bad luck and good drafting by Ainge than it did anything he did wrong.

Surprisingly, Hayward opted out of the final year of his contract, likely ending his disappointing three years as a Celtic.

Hayward was supposed to be the perfect match with the Celtics, not only teaming up with his college coach, Brad Stevens, but he was that missing, veteran piece.

Hayward was an all-star, an unselfish team player, who could do a little bit of everything, including his shooting.

The most expensive free agent in franchise history, he wreaked of Celtics Pride.

Only 4 minutes and 32 seconds into his four-year, $127,829,970 contract all hell broke loose. His ankle turned sideways after an awkward fall.

That was it. That was the relationship. Always sideways.

We never got the All-Star Hayward. That guy disappeared with the ankle injury.

The Celtics ended up losing not only Hayward for the year, though there was talk about his miracle rehab, but Kyrie’s achy knee needed surgery and ended just over a month before the playoffs.

So what did the Celtics do with their “championship” pieces? They pushed the Cleveland Cavaliers and LeBron James to seven games in the Eastern Conference finals at the TD Garden.

It was an amazing playoff run.

Tatum, a rookie, averaged 18.5 points in April and May. Brown, in his second year, chipped in with 18 points per playoff tilt, up 13 points from his rookie contribution.

While Hayward’s recovery went well, his place on the team was not the same as when he arrived.

Then there was Kyrie, who by all accounts had his own rules, which was a mistake by Ainge.

Tatum and Brown were future stars and they were not happy as understudies, at least initially, to Hayward, who was a shell of himself.

All of the positive energy from the entertaining playoff run the previous season was null and void. And Stevens, whose relationship with Hayward went back to 2007 when the then-Butler coach saw Hayward playing tennis, seemed uncomfortable being in the middle.

Things improved for Hayward after the 2018-19 season with Kyrie gone, showing his versatility as a complete, unselfish player.

But he was no longer the No. 2 option. With Kemba Walker signed this past year, Hayward was the No. 4 option.

It was a role he never “owned” consistently. He averaged 17.5 points per game this past, shortened regular season but only played five playoff games, averaging 10.8 points after having to overcome another ankle injury (the other one) as the playoffs started.

Personally, the most disappointing aspect of his post-injury time here was that he acquiesced, too often, to lesser players.

He arrived here as a scorer, one on one. He could dribble, drive, pull-up or hit the 3-pointer.

Yet, Hayward “the shooter,” particularly when wide open, missed more than he was supposed to.

That killer mentality we saw in Utah never materialized. Or was destroyed the opening night three years ago.