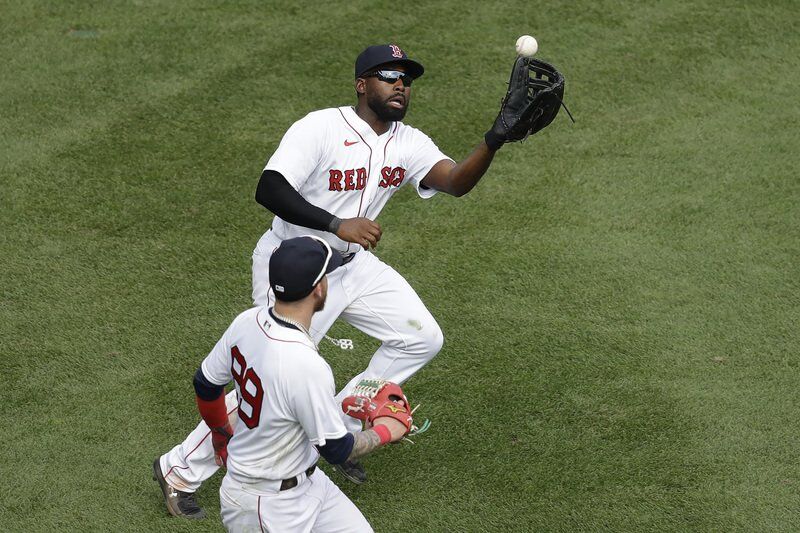 AP Photo/Steven SenneBoston’s Jackie Bradley Jr., top, gets his glove on an RBI-single by Baltimore Orioles’ Chris Davis after the ball bounced off the Green Monster wall as Alex Verdugo, bottom, runs beside him. 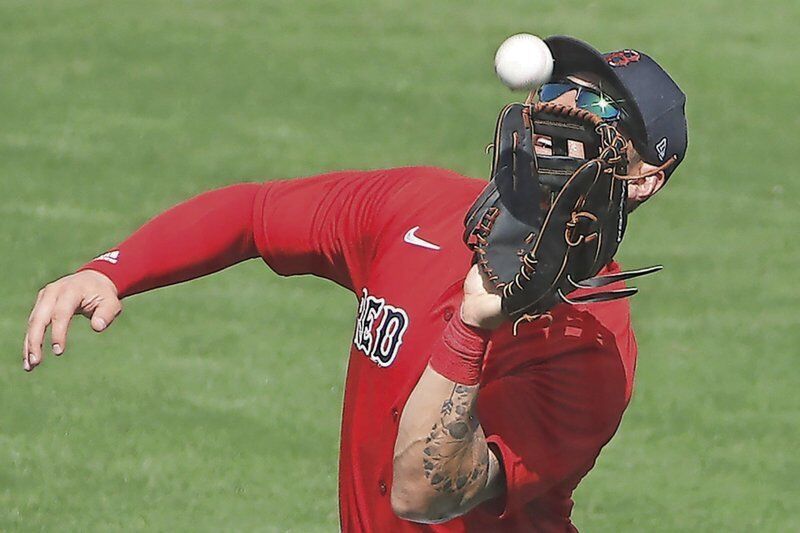 AP Photo/Steven SenneBoston’s Jackie Bradley Jr., top, gets his glove on an RBI-single by Baltimore Orioles’ Chris Davis after the ball bounced off the Green Monster wall as Alex Verdugo, bottom, runs beside him.

There is this particular proverb in football. At all levels.

The point being with two QBs sharing time means neither guy is a “franchise” guy.

And that could be a problem, as in potential trouble for Red Sox manager Ron Roenicke.

Andrew Benintendi, Jackie Bradley Jr., Alex Verdugo and Kevin Pillar are the “Fab Four,” or at least the “Good Four.”

All have something to prove in this 2020 sprint.

Benintendi needs to prove his early hype after finishing just behind Aaron Judge for Rookie of the Year in 2016.

Bradley needs to prove he can hit semi-consistently with a contract year coming in 2021.

Verdugo needs to prove he can somewhat replace Mookie Betts, whom he was traded for.

And Pillar, a proven, rock-solid, durable grinder, needs to prove he deserves a “payday,” say a 3-year, $36 million deal, somewhere in 2021.

The bad news is that cone or two of these guys, without an injury to open up playing time, may not get the at bats desired to prove their said cases.

While it seems obvious that Benintendi and Bradley are proven Sox, deserving to be in the lineup every five of six games, and that newbies Verdugo and Pillar are battling out for the final spot supremacy, not so fast.

Happiness is not an option. In fact, based on numbers and talent in the outfield, it’s impossible.

If the Red Sox are to make a run this late summer, it will be because the starting rotation is much more successful than we thought it would be and their lineup was elite.

Personally, based on very early progressions, as well as past performance, it’s going to be hard not writing Pillar’s name in the lineup nearly every day. Not only is he an elite defensive outfielder, just below Bradley, he appears to be possessed at the plate and ready to have a semi-breakout season.

Yes, three games isn’t a big body of work — Pillar is 4 for 8. But his spark in the lineup is obvious and very much needed. Yesterday he added a home run and now leads the team with four RBIs.

Verdugo also has some attractive qualities. In terms of confidence, he’s mature beyond his years. He not only is fearless, but the 23-year-old carries himself as if he’s a superstar.

If Verdugo is “the future,” which he probably is as the key part of the Betts-David Price trade/salary dump, do the Sox accept some growing pains and mini-slumps?

Benintendi and Bradley offer different elements. Benintendi as a possible leadoff hitter and Bradley, with some improved consistency, a power hitter in the back of the lineup.

But Beintendi, who is 0-for-10 with five strikeouts, and Bradley have also had a tendency to slide under the radar the last two seasons with so much superstar-like offense out of J.D. Martinez, Xander Bogaerts, Rafael Devers and Betts.

With the Red Sox staff without Chris Sale in 2020, as well as the Price trade, Benintendi and Bradley will have to earn everyday-status with Pillar and Verdugo more-than-worthy replacements.

Designated hitter is out of the question, too, with Martinez finally accepting the full-time role for the rest of his career.

Speaking of those with something to prove, Roenicke is front and center. He has 57 more games to prove if he is worthy of being the skipper of the most-pressured position in Boston sports — Red Sox manager.

A legitimate nice guy, this is no time to be a nice guy figuring out which three outfielders are his everyday guys.