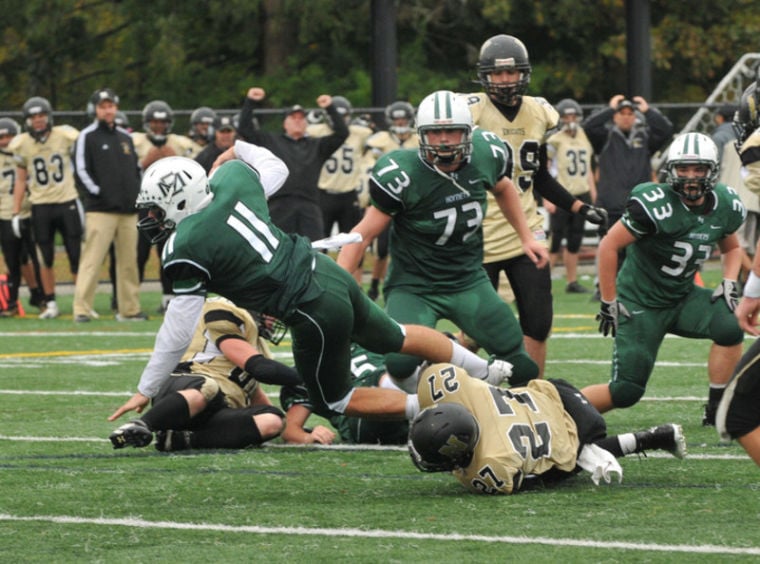 Manchester's QB Cory Burnham holds the ball and goes for the end zone but comes up short, much to the releif of Northeast Metro RVT coaches on the sidelines Sunday afternoon at Hyland Field. 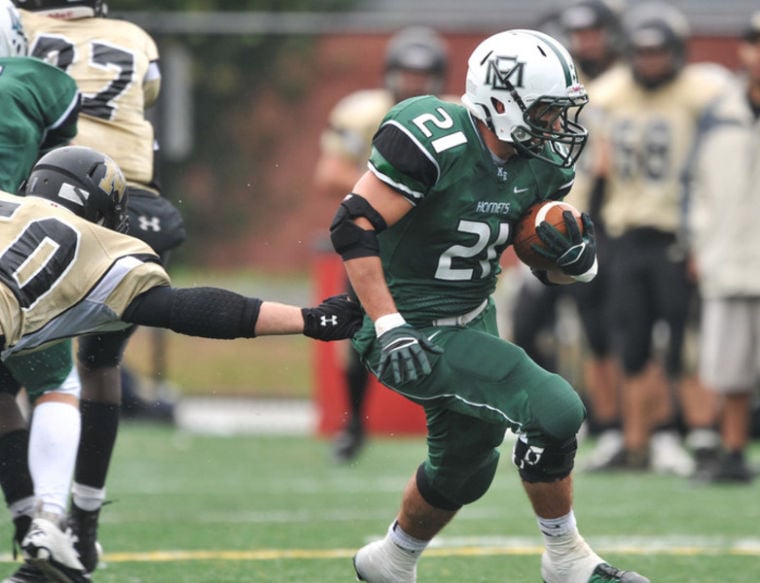 Manchester's QB Cory Burnham holds the ball and goes for the end zone but comes up short, much to the releif of Northeast Metro RVT coaches on the sidelines Sunday afternoon at Hyland Field.

MANCHESTER -- If it were up to the Manchester Essex football team, yesterday’s game would have ended at halftime.

Unfortunately, the Hornets had to come back out of the locker room for the second half.

After surrendering just 70 first half yards and keeping Northeast off the scoreboard before halftime, the wheels fell off for the Hornets in the second half, as the Golden Knights moved the ball at will, piling up 32 points to cruise to a 32-14 victory at Hyland Field.

The loss drops Manchester Essex to 1-5 on the season heading into league play next weekend.

“We just wore down,” Hornets coach Mike Athanas said. “We had a couple of injuries, and they concentrated on running the football and they did a nice job of it. We couldn’t stop them.”

Generally, a phrase like “we couldn’t stop them” is an exaggeration. For the second half of yesterday’s game, though, it was about as accurate as it will ever be.

A terrific defensive first half was soon forgotten, as the Golden Knights (4-2) punched four of their five second-half possessions into the endzone. The lone exception was their final drive, when they were in victory formation.

Behind running back Kenny Bartolo’s 142 yard, two touchdown performance and 244 second-half rushing yards, Northeast effectively broke the Hornets down throughout the second half.

It didn’t help that injuries to Chris Dumont (RB/DB) and Zach Fleming (RB/DL) left Manchester Essex without four two-way starters for the second half, as Jake Fitzgerald and Doug Rodier remain out with lengthy injuries suffered early in the season.

Northeast topped their first-half offensive output with a 71-yard touchdown drive after the opening kickoff in the second half, culminating in an eight-yard touchdown run by running back Kevin Rosado (82 rushing yards).

The Hornets quickly responded, though, regaining the lead with a 14-yard touchdown pass from Cory Burnham -- who had run for the Hornets to Henry Gedney to cap off a five-play, 53-yard drive.

But from there, it was all Northeast. The Golden Knights marched the field on the ensuing drive, and when the Hornets finally had a good shot to hold them -- with a 4th-and-11 from the Manchester Essex 15-yard line -- Northeast quarterback Troy Tartarini found tight end Nick Giangregorio all alone for a touchdown pass.

It was Tartarini’s lone pass attempt after halftime, and it gave the Golden Knights a 16-14 lead -- a lead they wouldn’t surrender.

Northeast followed up that touchdown with a successful onside kick -- their third attempt of the game -- keeping the Manchester Essex defense on the field and stretching their lead to 24-14 early in the fourth quarter.

“The defense was out there a long time,” Athanas said. “Without a doubt, they wore down. ... [The onside kick] was the turning point, without a doubt. We practice the onside kick all week, they do it a lot and they do it well. We just have to get out of the way and the ball goes out of bounds and it’s our ball.”

That didn’t happen, though, and by the time Bartolo gave the Golden Knights their 32-14 lead with a 60-yard touchdown late in the fourth quarter, the game had long-since been decided.

While it wasn’t pretty, the Hornets’ first half was likely their best half of football all season.

To the chagrin of Athanas and his team, though, they followed it up with perhaps their worst half of the year.

“They didn’t adjust. They ran the same plays,” Athanas said. “They threw a little bit more in the first half, which was helpful to us. But they really bared down and ran the ball. They ran sweep, they ran iso to the back-side, and we couldn’t stop them. Simple as that.”