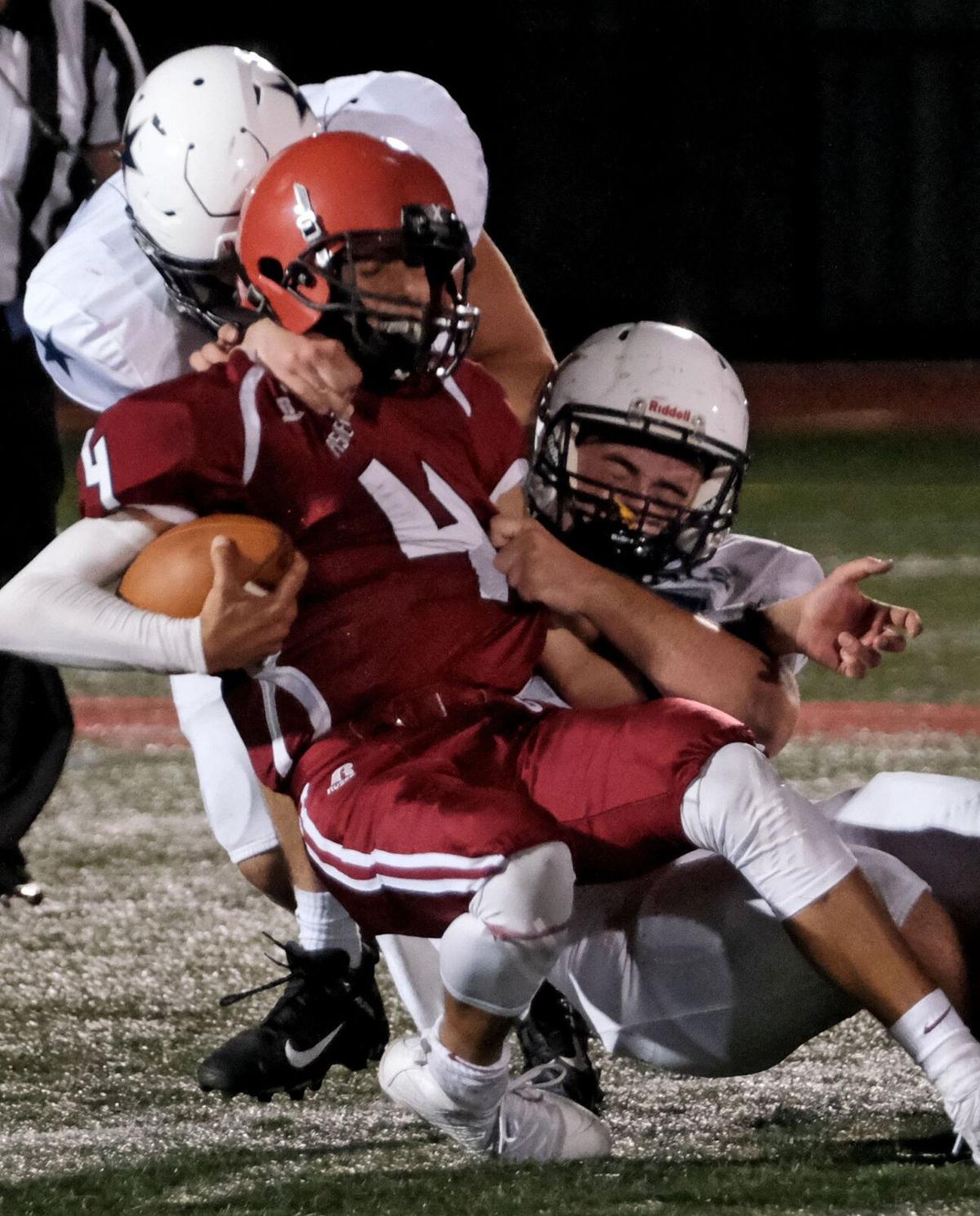 Gloucester quarterback Nick Carey is sacked by a pair of Hamilton-Wenham defenders in Friday’s game at Newell Stadium. 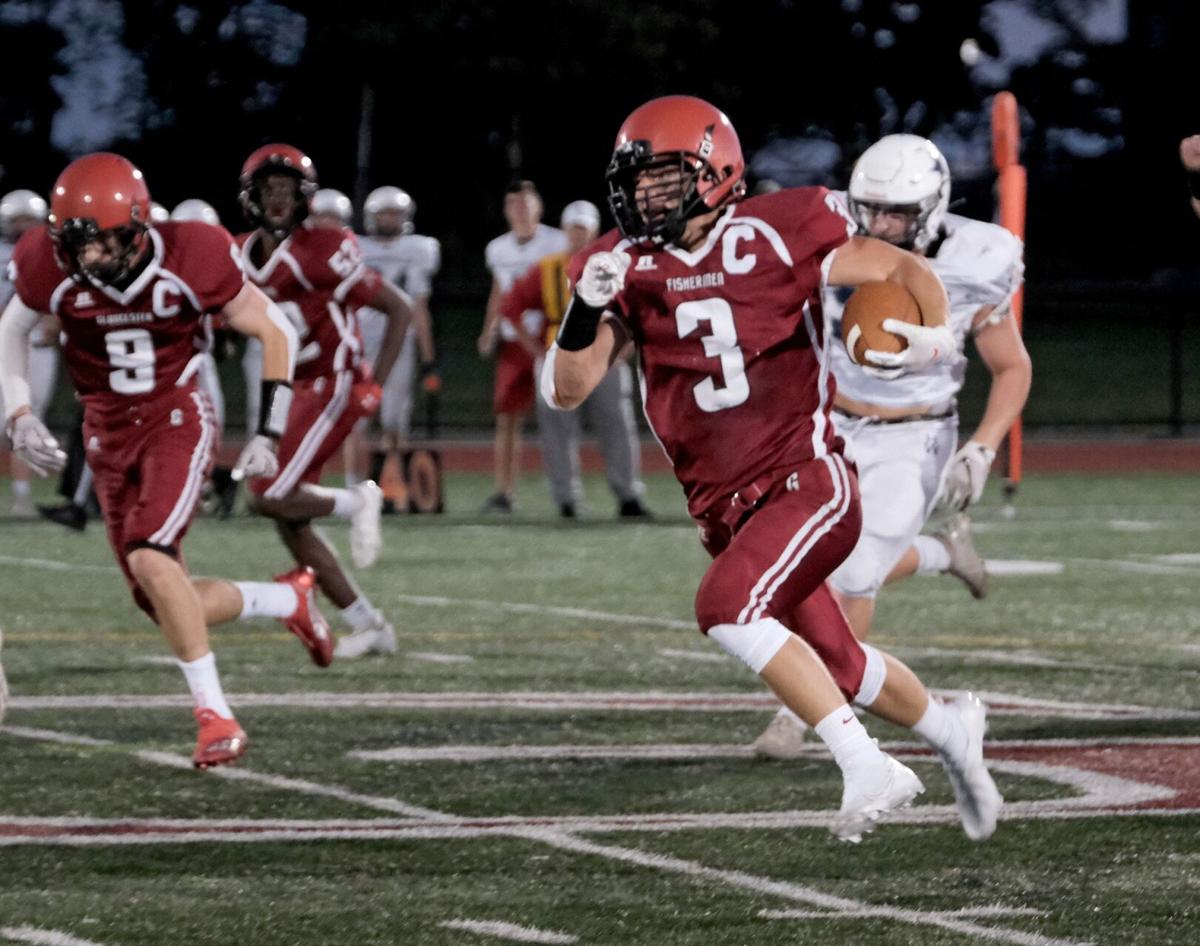 Gloucester’s Caleb DeCoste breaks away for a 62-yard touchdown run in the first quarter of Friday’s game against Hamilton-Wenham. 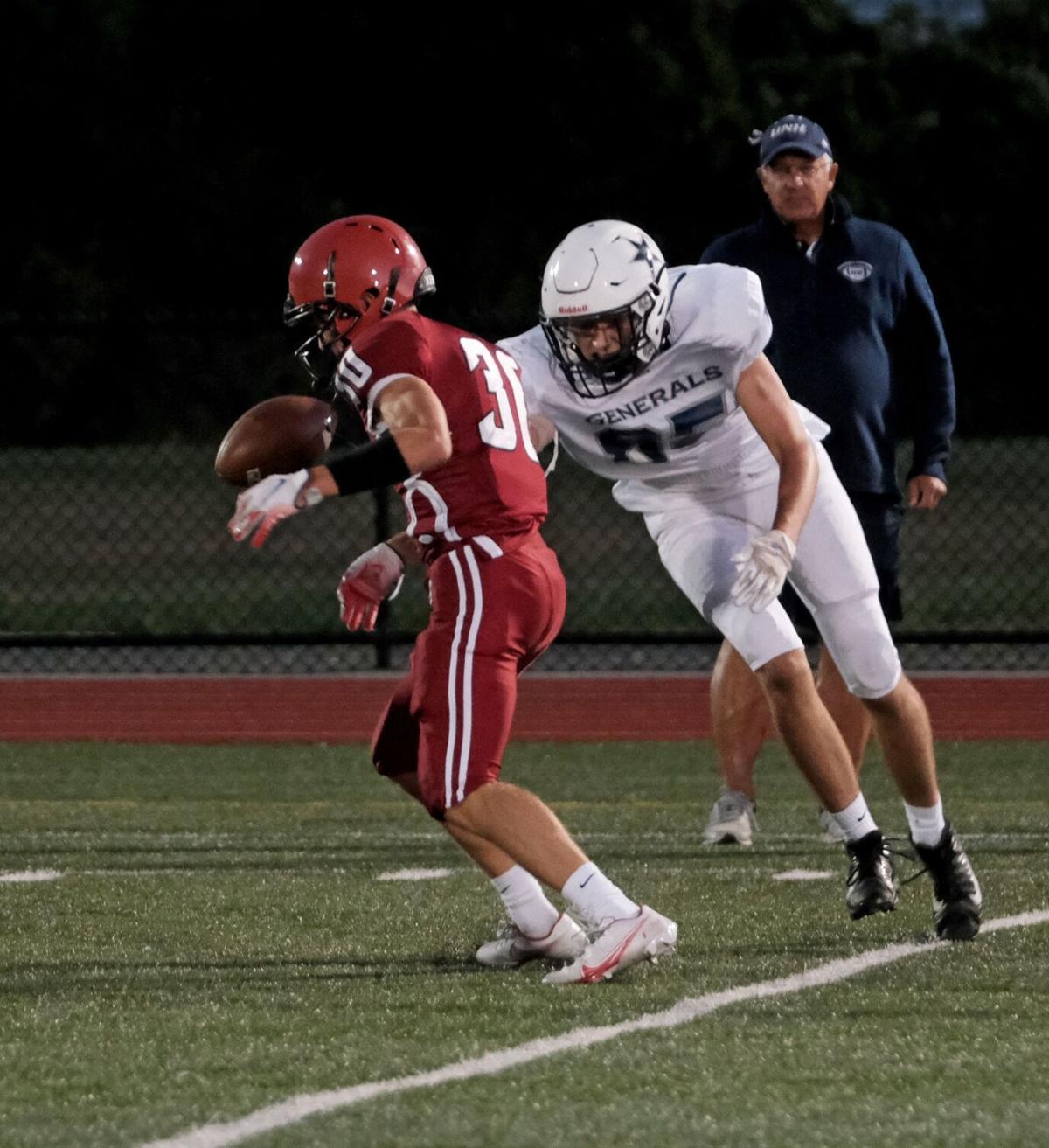 Gloucester’s Cameron Widtfeldt picks off a pass in Friday’s game against Hamilton-Wenham at Newell Stadium. 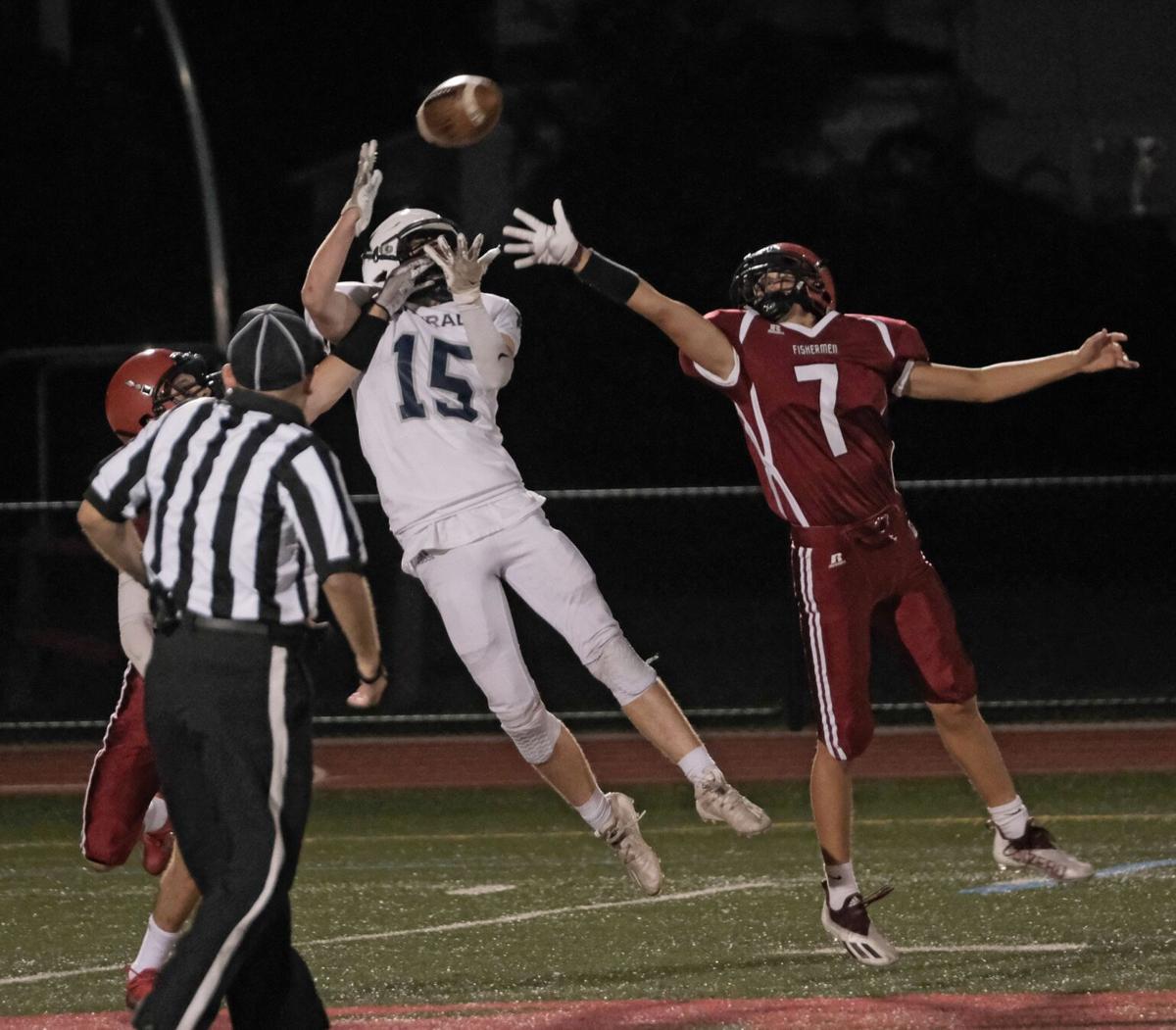 Hamilton Wenham’s Thomas Ring goes up for a pass with Gloucester’s Robert Schuster. Ring made the catch but it was wiped out by a holding penalty. 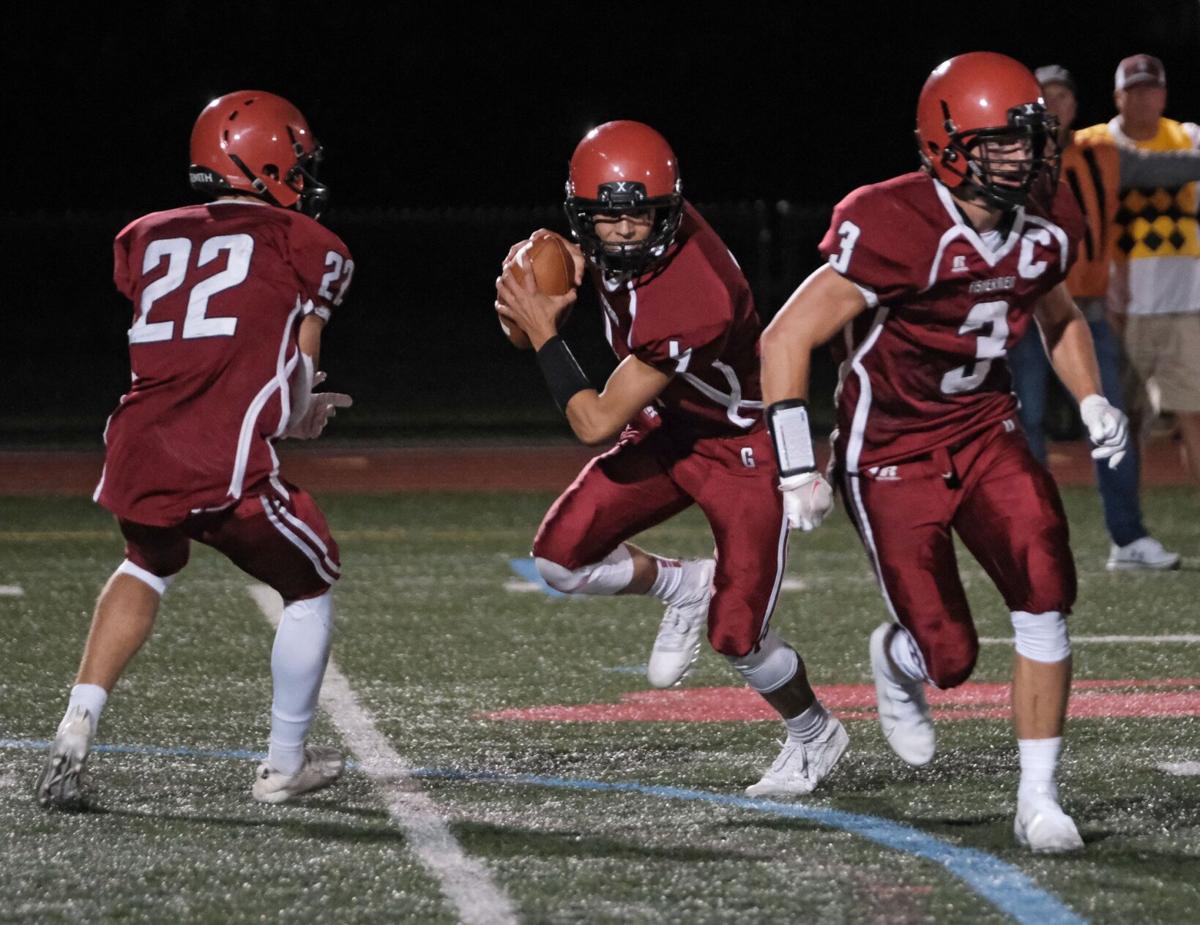 Gloucester quarterback Nick Carey is sacked by a pair of Hamilton-Wenham defenders in Friday’s game at Newell Stadium.

Gloucester’s Caleb DeCoste breaks away for a 62-yard touchdown run in the first quarter of Friday’s game against Hamilton-Wenham.

Gloucester’s Cameron Widtfeldt picks off a pass in Friday’s game against Hamilton-Wenham at Newell Stadium.

Hamilton Wenham’s Thomas Ring goes up for a pass with Gloucester’s Robert Schuster. Ring made the catch but it was wiped out by a holding penalty.

Friday’s season opening non-league tilt between Gloucester and Hamilton-Wenham was a defensive grind.

The Fishermen and Generals traded hits for the duration in a game where points were difficult to come by.

In the end, it was Hamilton-Wenham that turned in the more complete performance as a ball control offense that chewed up 32:46 of clock, strong special teams that set up all three scores and a dominant defense led to a 13-7 win at Newell Stadium.

With the win, the Generals move to 1-0 in a game that was sloppy on both sides.

“Defense did a great job tonight,” Hamilton-Wenham head coach Jim Pugh said. “Both offenses struggled a little bit, penalties hurt both teams but we were able to take advantage of a couple short fields set up by our special teams and our defense made stops.”

Gloucester (0-1) struggled on offense for much of the night. While Caleb DeCoste gave the Fishermen early momentum in the form of a 62-yard touchdown run on a fullback trap up the gut to make it 7-0, they could not find a rhythm from there. Gloucester finished the game with just four first downs and only 110 yards of total offense.

“We didn’t do a good job picking up their blitzes,” Gloucester head coach Dan O’Connor said. “Some of that comes with inexperience, some of that comes from good execution from Hamilton-Wenham. We just need more continuity on offense. We need to find plays that work and tonight we didn’t do that.”

After Gloucester took a 7-0 lead, Hamilton-Wenham immediately snatched momentum thanks to the play of Markus Nordin. The senior switched from quarterback to receiver throughout the game and made plays all over the field.

Nordin’s 60-yard kickoff return set up his 10-yard touchdown run later in the drive, the only Generals touchdown of the game. He led the team with 61 yards on the ground and also picked up 27 yards receiving to go along with the kickoff return.

“He does it in so many ways,” Pugh said. “He’s such a good player for us and he came through tonight. That kickoff return was big after Gloucester scored. He does everything for us.”

Hamilton-Wenham took the lead thanks to strong special teams play. Pressure on a Gloucester punt forced a shanked kick that saw the Generals set up shop deep in Gloucester territory. While the Fishermen defense made the stop, kicker Zachary Walles kicked a 39-yard field goal to give his team a 10-7 lead at the break. Walles then added a 24-yard field goal in the fourth quarter to cap the scoring at 13-7.

“He kicked for us two years ago and did well,” Pugh said. “We had a soccer player kick for us in the spring but he stepped right back in and nailed a big kick to give us the lead at the half.”

Hamilton-Wenham had chances to put the game away, but the Gloucester defense continued to make big stops to keep it close. Frank DeSisto had a nice game on defense while Aidan Cornetta and Cameron Widtfeldt each had an interception. Anthony Russo led the way on the defensive line.

The Generals, however, had a six minute drive and a drive just under five minutes to keep the Fishermen offense off the field and eventually wear down the defense.

“They ball controlled us tonight but I couldn’t ask for more out of our defense,” O’Connor said. “They fought all night, played physical and came up with some key stops. We just need to support them more going forward, on offense and on special teams.”