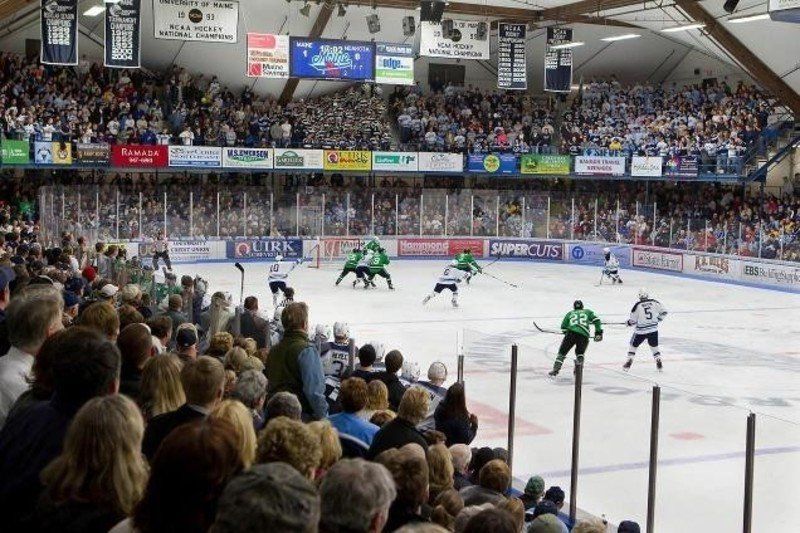 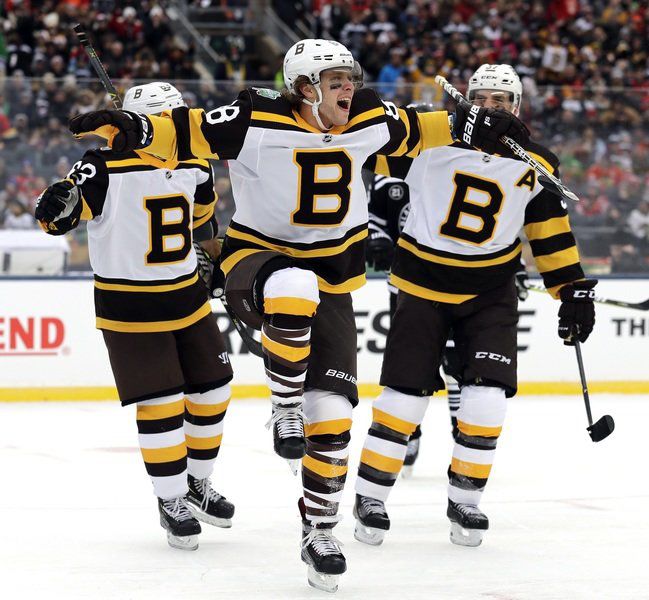 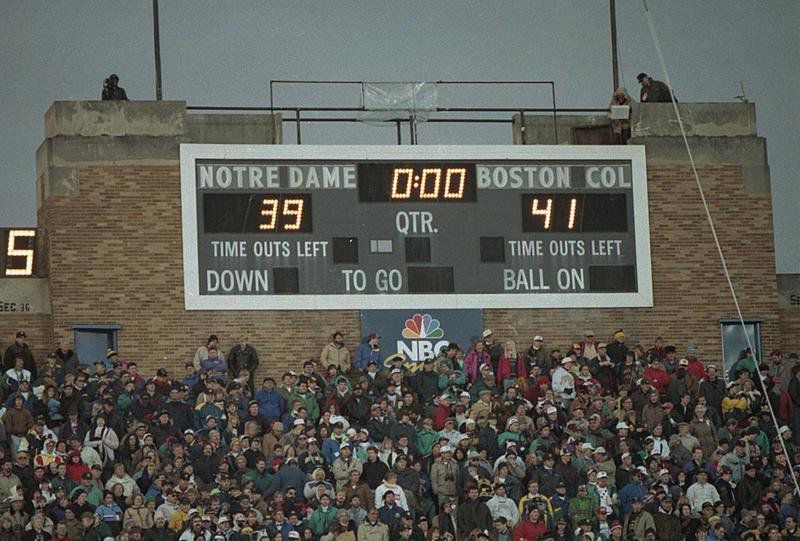 Phil Stacey was on hand at Notre Dame Stadium in November 1993 when Boston College upset the top ranked Irish with a last-second field goal.

Phil Stacey was on hand at Notre Dame Stadium in November 1993 when Boston College upset the top ranked Irish with a last-second field goal.

In today's 'Our Favorites', we pick our favorite athletic venues we've been to outside of Boston.

Back in 1993, some buddies of mine had an idea that we should road trip out to South Bend, Ind. to watch a game at Notre Dame Stadium. I was never the biggest Fighting Irish fan — my (late) dad and one of my brothers were diehards, though — but as someone who loved sports and its history, this was too good an opportunity to pass up.

We lucked out and got a classic, too. Notre Dame was No. 1 in the country in Nov. 1993, having just defeated Florida State in the famous 'Catholics vs. Creminoles' game. All the Irish had to do was beat Boston College at home — the game we drove out for — and they finish the regular season unbeaten and atop the polls. Only Boston College (which had won 7 straight coming in) didn't follow the script, jumping out to a big lead before Notre Dame made a huge fourth quarter rally, scoring 22 points to take a one-point lead late. Undaunted the Eagles marched downfield, aided by some by third down plays, and got a 41-yard field goal from David Gordon as time expired for the 41-39 upset. Seeing an ND supporter in his 60s crying while leaning face-first against the old stadium is an image I've never forgotten.

A little more than 25 years later, I flew into Indianapolis and made the 2 1/2 hour drive to South Bend for the the first-ever hockey game at the stadium as the Bruins met the Blackhawks in the 2019 Winter Classic. The game itself and the atmosphere surrounding it were terrific, but it's the day before I'll remember most. Walking around the stadium under the stands on a gray, rainy Midwestern day, with banners made to look like ancient Notre Dame program books hanging from the rafters, really brought out the rich tradition and history of this sacred cathedral. So did going in the home team's locker room (which was assigned to the Blackhawks) and tapping the famous 'Play Like A Champion' sign. My front row seat in the press box (ironically, I ended up sitting next to injured Bruins D-man Charlie McAvoy) wasn't too shabby, either.

The best hockey atmosphere in North America — and I don't want to hear about Toronto, Montreal or Minnesota.

If you haven't sat in the balcony in Orono sending 'Sieve!' chants down at the poor opposing goalie that happens to stuck underneath the overhang trying to maintain his composure, then you haven't seen Shakespeare the way it was meant to be done.

While a student at the University of Maine, I went to roughly 60 Black Bears men's hockey games at the Alfond (plus a bunch of basketball). Maine was fortunate to win 45-or-so of those, which I'm sure helped the experience. There's no better fan experience. Anywhere. The crowd is friendly but hostile, small enough (5,500-ish) to be intimate yet intimidating.

The acoustics of the dipping roof, designed to ward off snow, make the trumpets and tubas of the pep band echo all over the rink. In those days you'd stand outside for 2-3 hours before a huge game just to get in the door so you could experience the place. It's probably changed a little bit in the years since — and the dipping of the team's quality doesn't help — but when the Black Bears are on top of their game, you can't top the goal horn and the Stein Song up in the woods of Orono, Maine.

I'll be honest: in my nearly 28 years on earth I haven't gotten to as many out-of-state arenas or stadiums as I would've hoped to. Outside of Fenway Park, Gillette Stadium and TD Garden, I can count on one hand how many experiences I've had at foreign venues.

With that said, I did get the chance to catch a regular season Washington Wizards game at their home arena in D.C. a few years back. Sure, the Wizards stunk at the time, and the 20,000-plus capacity establishment was probably not even three-quarters filled. But it was still an unforgettable night for a few reasons. For one, the stadium was beautiful. Nothing too fancy, but great views no matter where you sat; comfy chairs and a solid overall atmosphere. My girlfriend and I sat next to a couple of hoopheads and I had a blast shooting the breeze and analyzing their hometown franchise with them. The two fans, who regularly attended Wizards games, were quite critical of their squad's players, and being in a place outside of Boston really made you appreciate how great a sports town we really live in.

The patriotic colors of red, white and blue making up the stadium were extremely inviting, and the silence throughout the building for the entirety of the game was a completely new vibe.

Just an NBA fanatic, his girlfriend and two other basketball lovers sitting back and enjoying 48 minutes of uninterrupted hoops. What could be better?

Hands down the best sports atmosphere I've ever been in was at Ohio State University's Ohio Stadium (just edging out the University of Alabama's Bryant Denny Stadium). There's just nothing like the atmosphere of a college football game — especially a night game — which blows any pro sports atmosphere in the United States out of the water.

I was lucky enough to visit Ohio Stadium back in 2012 for a night game against Nebraska, and to say it was electric would be a serious understatement. The 100,000-plus fans packed into 'The Horseshoe' made for an unforgettable experience. It was Urban Meyer's first year at Ohio State and the Buckeyes were the nation's only undefeated team (they were also on probation and bowl ineligible that season), led by Braxton Miller at quarterback. They faced a Nebraska team led by the running of Rex Burkhead, who got hurt in the middle of the game and led to a 63-38 Ohio State rout. Little did I know I was taking a glimpse into the future as Patriots fans have now grown accustomed to Burkhead — an excellent and valuable player — getting hurt in the middle of games.

Humble brag: I've been to tons of major sporting events on the biggest stage, including two Stanley Cup Final games, three Super Bowls and a World Series game in 2013. None of those atmospheres matched the dynamic the Buckeye faithful brought. The seats being packed tight enhanced the experience, as Ohio Stadium really isn't any bigger than Gillette Stadium in terms of surface area, but it holds 40,000 more people. The volume of the fans' cheers and their laser focus to the action on the field made it one unforgettable experience, even if I didn't have any rooting interest.