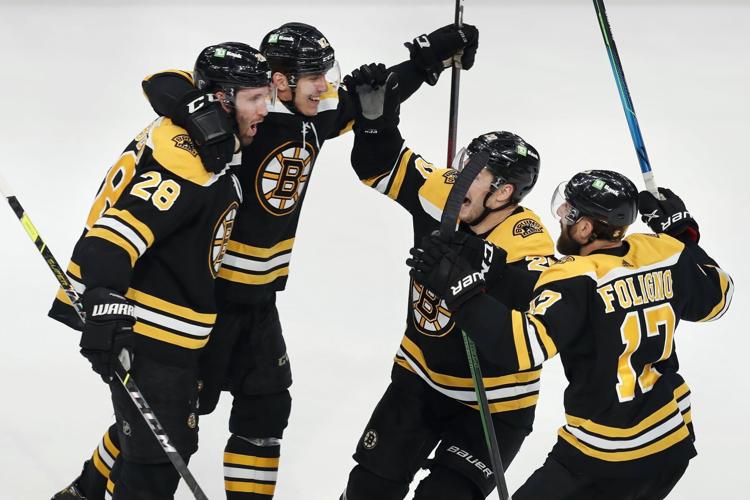 Bruins defenseman Derek Forbort (left) celebrates his third period goal with his teammates Tomas Nosek, Curtis Lazar and Nick Foligno as the Bruins forced a Game 7 with the Carolina Hurricanes after Thursday's 5-2 win. 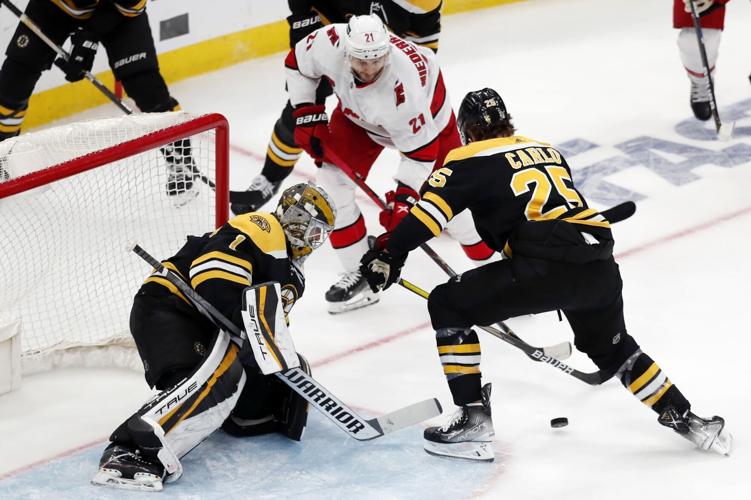 The defensive work of Brandon Carlo and goaltender Jeremy Swayman (23 saves) against the likes of Carolina's Nino Niederreiter helped them prevail in Game 6 Thursday night at TD Garden. 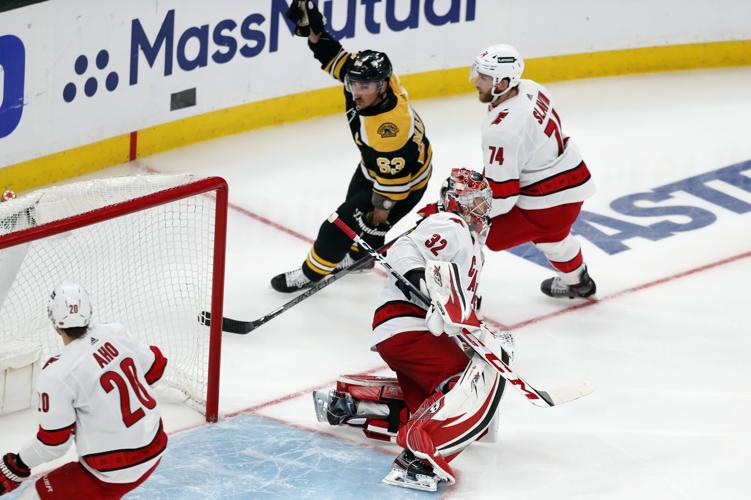 Brad Marchand celebrates after opening the scoring Thursday night against Carolina. His goal marked the first time the Bruins had scored first in a game against the Carolina Hurricanes this season.

Bruins defenseman Derek Forbort (left) celebrates his third period goal with his teammates Tomas Nosek, Curtis Lazar and Nick Foligno as the Bruins forced a Game 7 with the Carolina Hurricanes after Thursday's 5-2 win.

The defensive work of Brandon Carlo and goaltender Jeremy Swayman (23 saves) against the likes of Carolina's Nino Niederreiter helped them prevail in Game 6 Thursday night at TD Garden.

Brad Marchand celebrates after opening the scoring Thursday night against Carolina. His goal marked the first time the Bruins had scored first in a game against the Carolina Hurricanes this season.

BOSTON — One demon — being able to score first in a game against the Carolina Hurricanes during the 2021-22 season — has finally been exorcised.

Now, can the Boston Bruins conquer an even most befuddling beast by winning in Raleigh Saturday night?

A blood-and-guts effort Thursday night has given them that chance. A decisive 5-2 triumph over the Canes on home ice now puts the Bruins into their NHL record 29th Game 7 all-time, with the chance to do what few thought possible a week ago: advance to the second round.

Everything they needed to stave off elimination transpired for Boston: timely scoring, big saves from goaltender Jeremy Swayman, hitting all over the ice, lots of traffic in front of enemy netminder Antti Raanta, and once again frustrating a more talented team.

Now, they'll try to defy popular opinion and do what's befuddled them all year — all with their season on the line.

"I love it. This is what you play for. Guys should be excited," said head coach Bruce Cassidy. "We'd rather be at home; I'm not going to lie to you, but we'll play them on Mars."

Swayman said he dreamed of playing in a Game 7 "countless" times growing up; now, the Alaskan rookie will get that chance.

On this night, the Bruins seemed to get big plays at key junctures whenever the situation called for it.

Charlie McAvoy delivered a massive hip check to Carolina star Sebastian Aho that sent him helicoptering through the air. Trent Frederic, who rejoined the lineup after being scratched the previous three contests, raced down the ice to beat Raanta to a loose puck behind the latter's net to prevent icing. Blue liner Connor Clifton dished out seven hits. They had some puck luck when the Hurricanes hit the same post twice on one power play.

There was also the return of defenseman Hampus Lindholm after he was knocked out of Game 2 with an injury. He played nearly 25 minutes and set into motion the chain that led to Charlie Coyle's power play goal late in the second period.

On perhaps the night's most important sequence — a 54-second, 5-on-3 power play for Carolina, with the hosts holding on to a tenuous 1-0 lead — the defensive pairing of Derek Forbort and Brandon Carlo were at their best, taking away space with active sticks and physicality while each blocking a shot (Carlo on Teuvo Teravainen; Forbort down low vs. Andrei Svechnikov). They, along with Patrice Bergeron, Frederic (once he came out of the box) and Charlie Coyle killed off both penalties without allowing a single shot on Swayman.

Coyle then muscled his way out front of the Carolina net and swatted home a rebound two minutes before the second period ended for a 2-0 lead, and the Garden exploded. The first goals this postseason for Erik Haula, Forbort and, into an empty net, Curtis Lazar, sealed the deal in the third.

By all accounts, all the pressure will be on the Hurricanes Saturday night. The Metropolitan Division champions are the higher seed, pummeled the Bruins in three regular season meetings, and have followed a similar postseason path during Games 1, 2 and 5 at PNC Arena. They will also have the last change, which has flummoxed Boston when they've had to wear their white road uniforms.

It's imperative the Bruins finish their chances Saturday night, particularly if they crop up early on. Their defensive structure, work along the walls and in front of each net, ability to win faceoffs at crucial junctures, and preventing odd-man rushes while finding a way to create their own will all come into play. Their power play, which has been so good at home (5-for-18), has to find a way to fix what ails them away from 100 Legends Way (1-for-11).

There have been comparisons between the current squad and the 2011 Stanley Cup winning team (which are, in actuality, virtual polar opposites style and personality-wise) as far as dropping the first two games of a series, then coming back to win it in seven. Those Bruins of a decade-plus ago (that seems so weird to type) did so twice, dropping the first two at home to Montreal in the opening round, then two in Vancouver to open the Cup Final.

In the latter series, of course, they didn't prevail in British Columbia until Game 7, the only one that that ultimately mattered.

There's a big difference, though: the 2011 B's lost three one-goal games in Vancouver before hoisting the Cup in the winner-take-all finale. The 2022 B's have been outscored by four, three, and four goals, respectively, in North Carolina this postseason while giving up five tallies to the Hurricanes each time out.

So for Boston to advance to face the winner of the Penguins/Rangers series, they'll need to do a near-180-degree turnaround and find a way to bring some of that ol' home mojo with them to Raleigh.

Lindholm, who came to Boston as a trade deadline acquisition, has been around long enough to know the mood of his team's locker room.

"We have to keep showing up like we did today," he said. "They'll be at home with the crowd behind them ... but being the underdog is something that fits us well."

If anyone knows how to contact Nathan Horton, see if he's free to melt some Garden ice and sprinkle it on the sheet at PNC Arena prior to Saturday night's showdown.