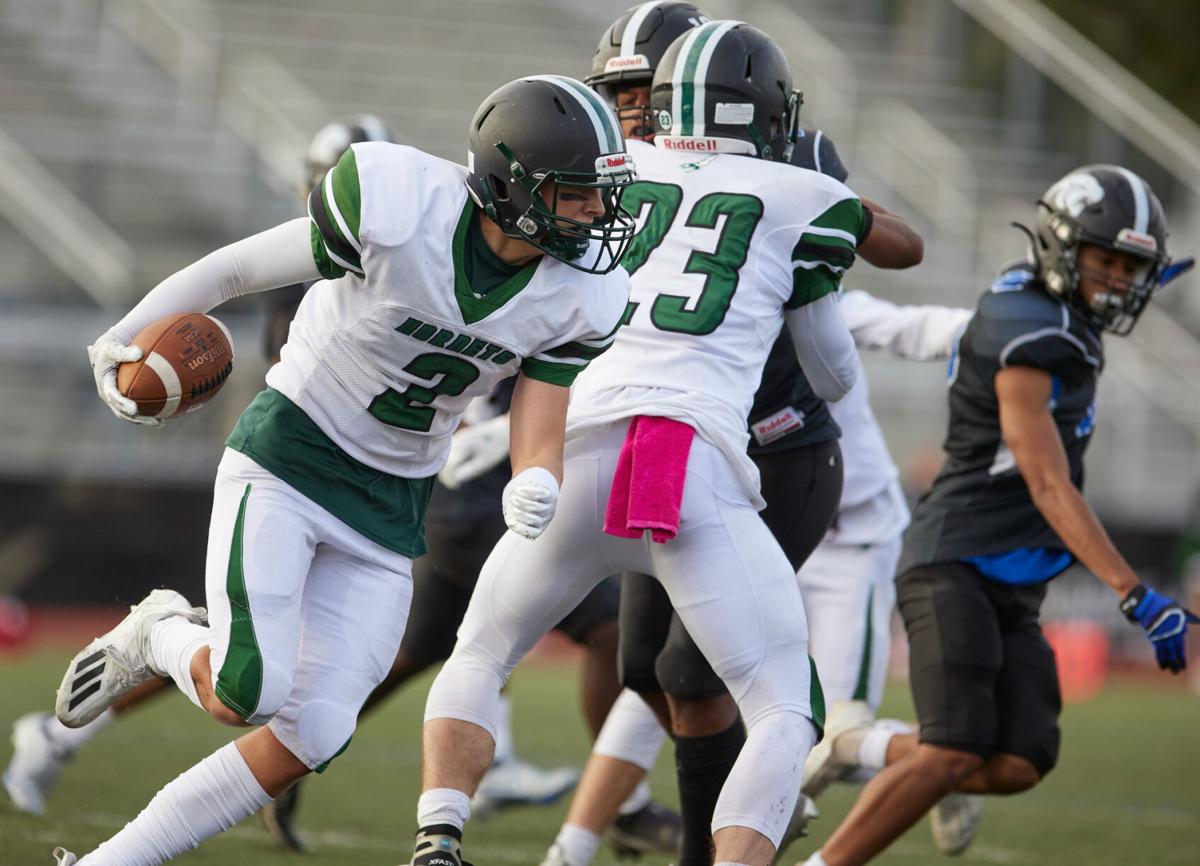 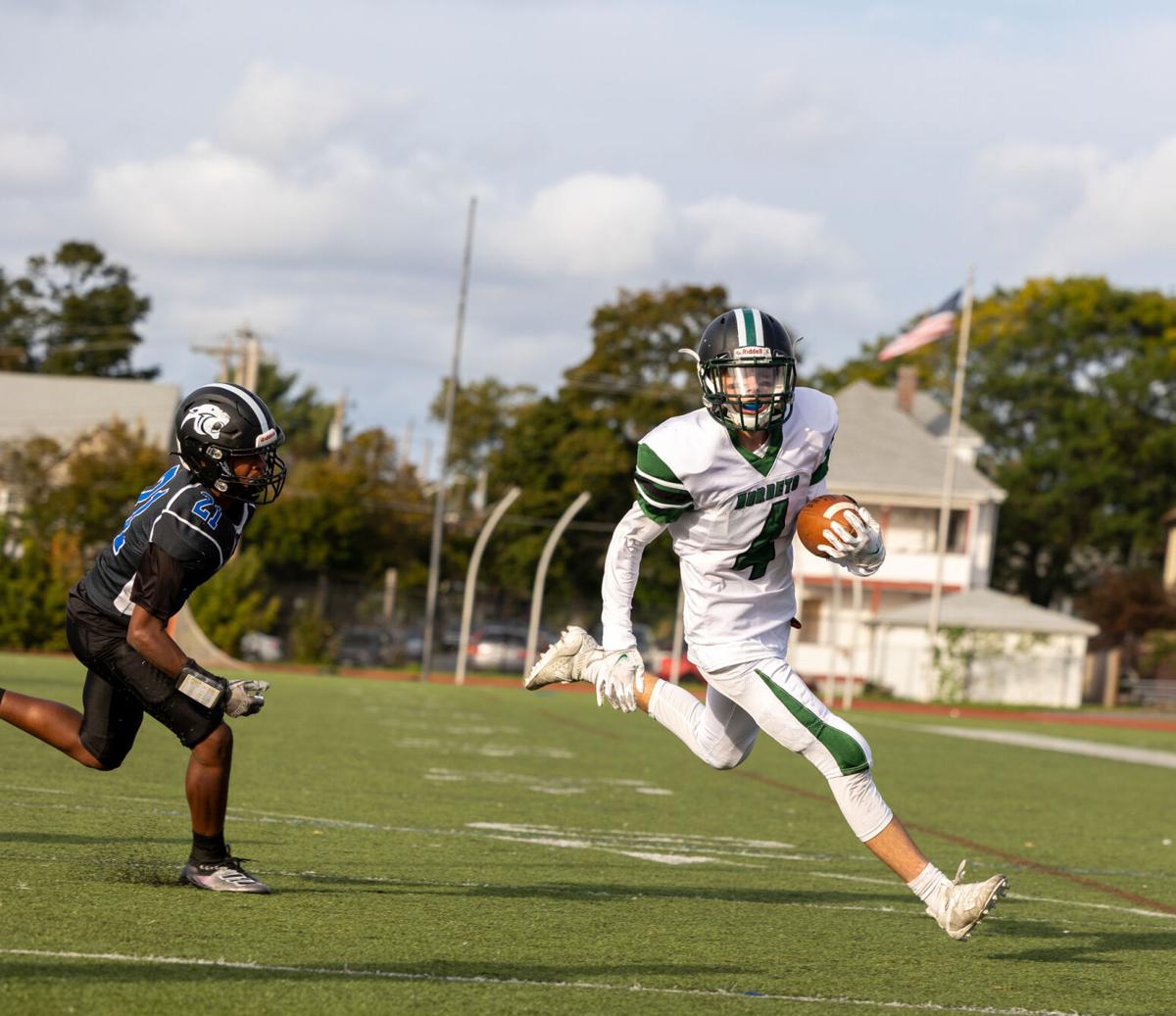 Manchester Essex running back Henry Otterbein hits the edge for a nine-yard touchdown run in the first quarter of Saturday’s win over KIPP at Manning Field. 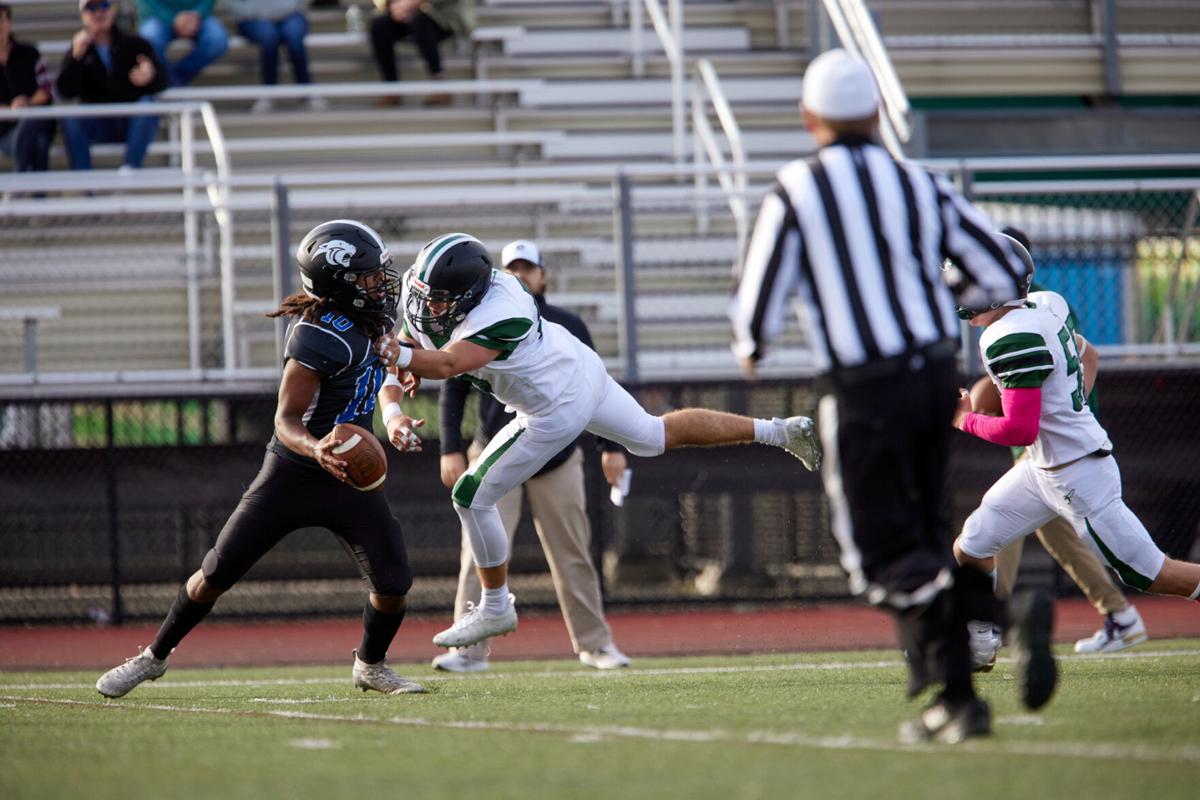 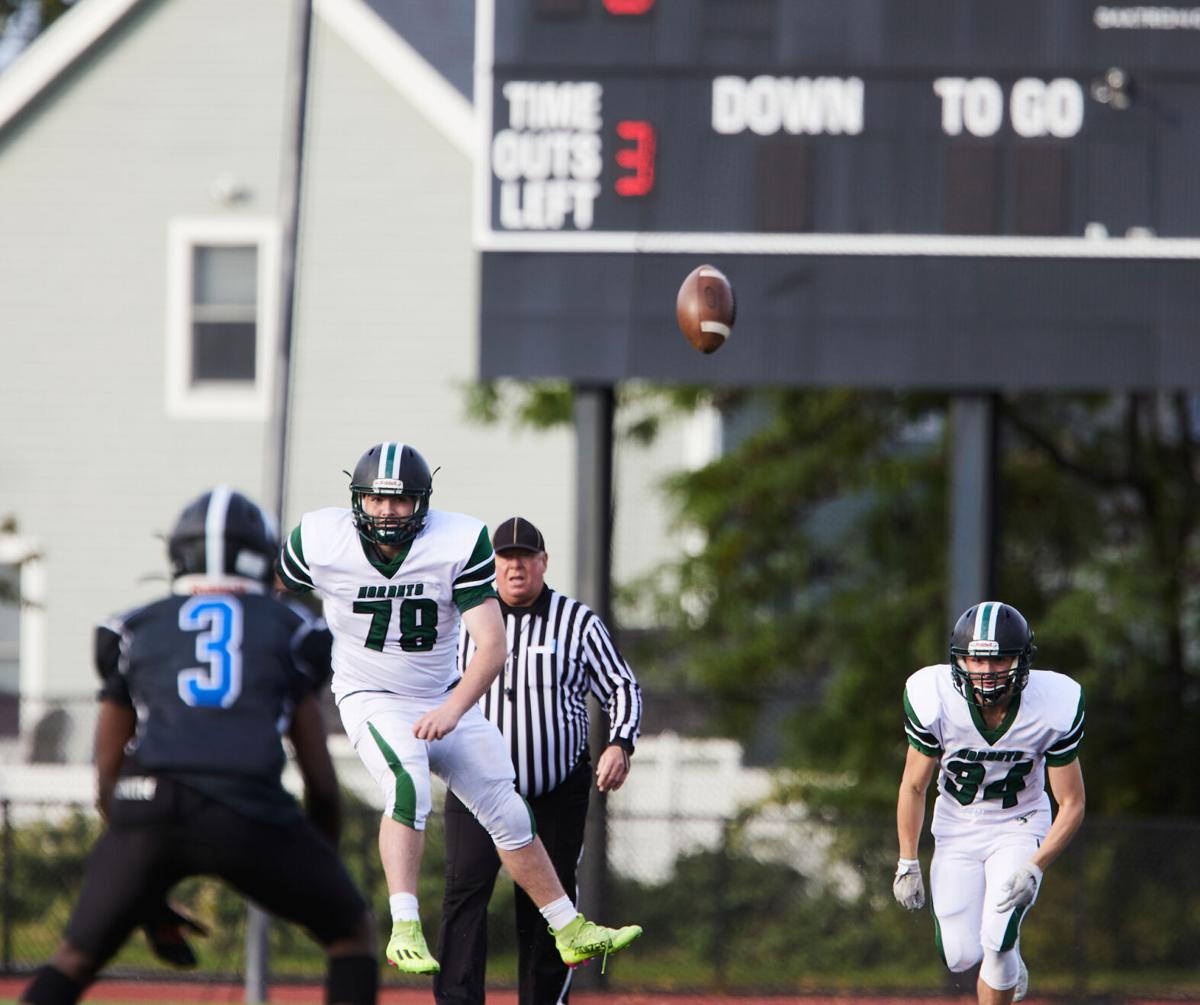 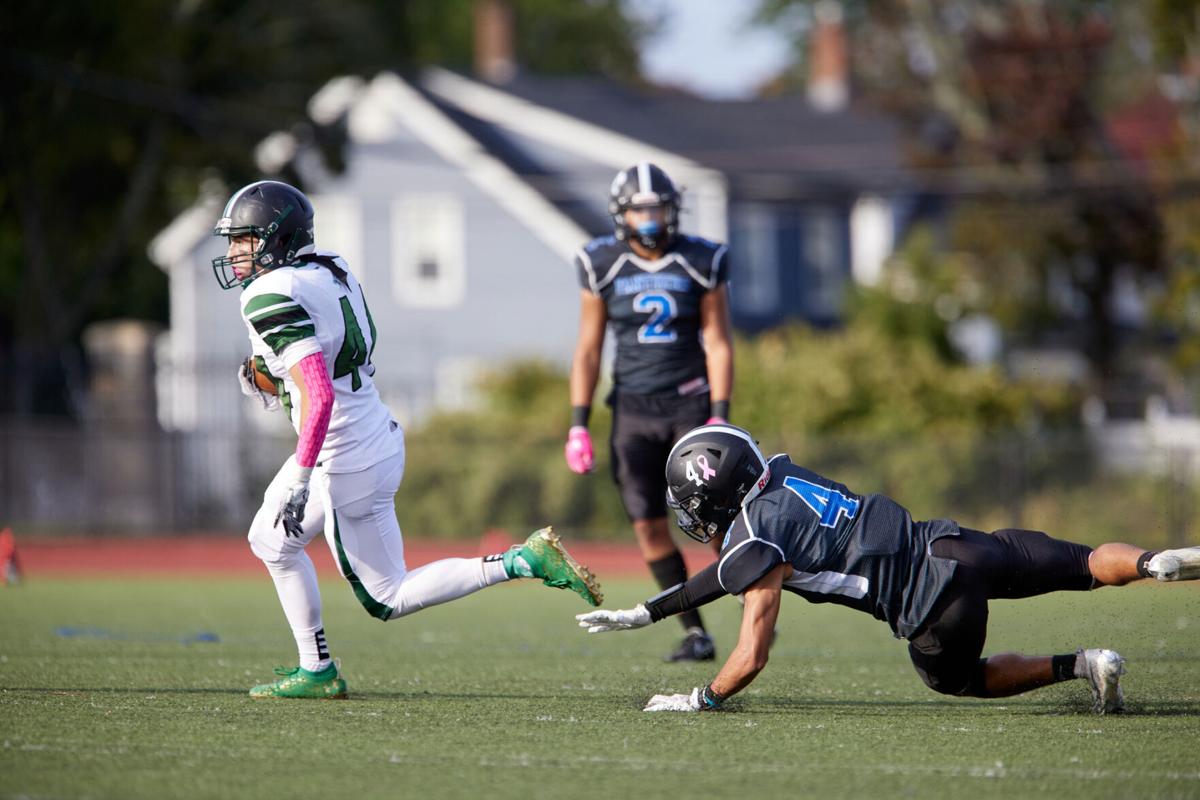 Manchester Essex’s A.J. Pallazola has put up some big receiving numbers this season. 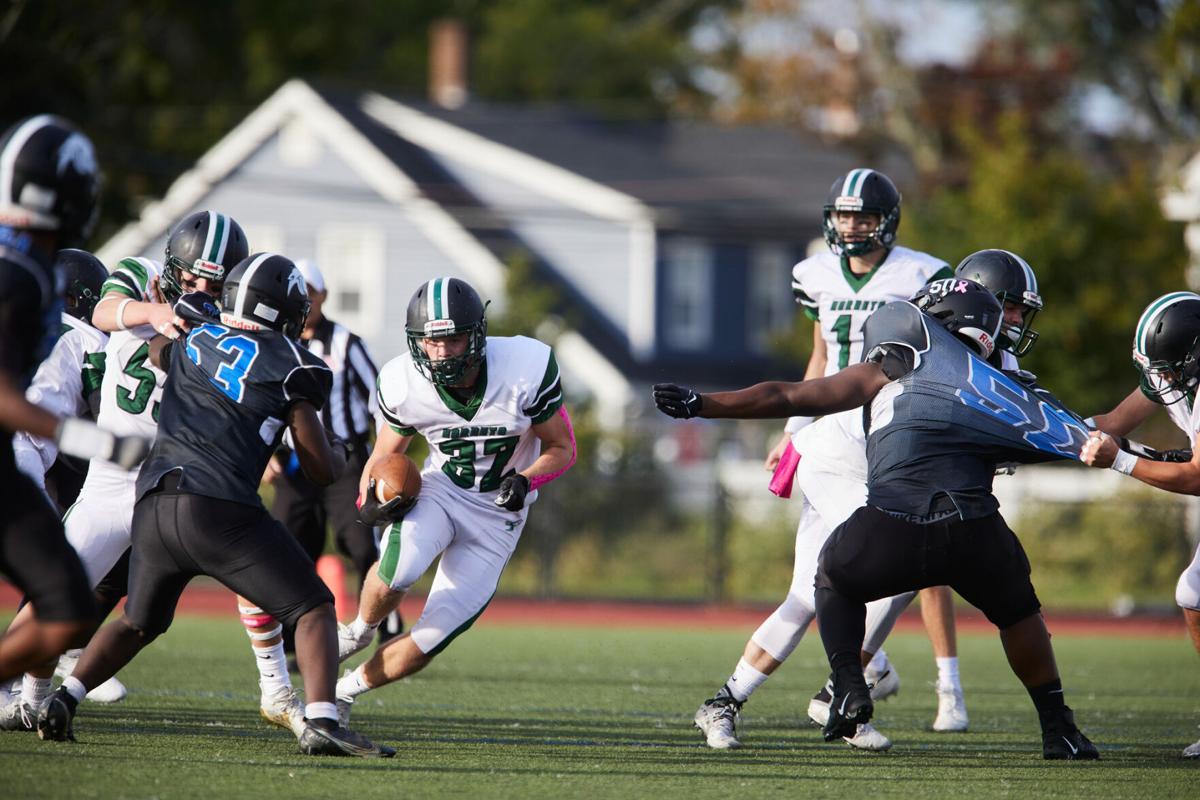 Luke Smith led Manchester Essex in rushing a week ago as the team put together a season high rushing total. 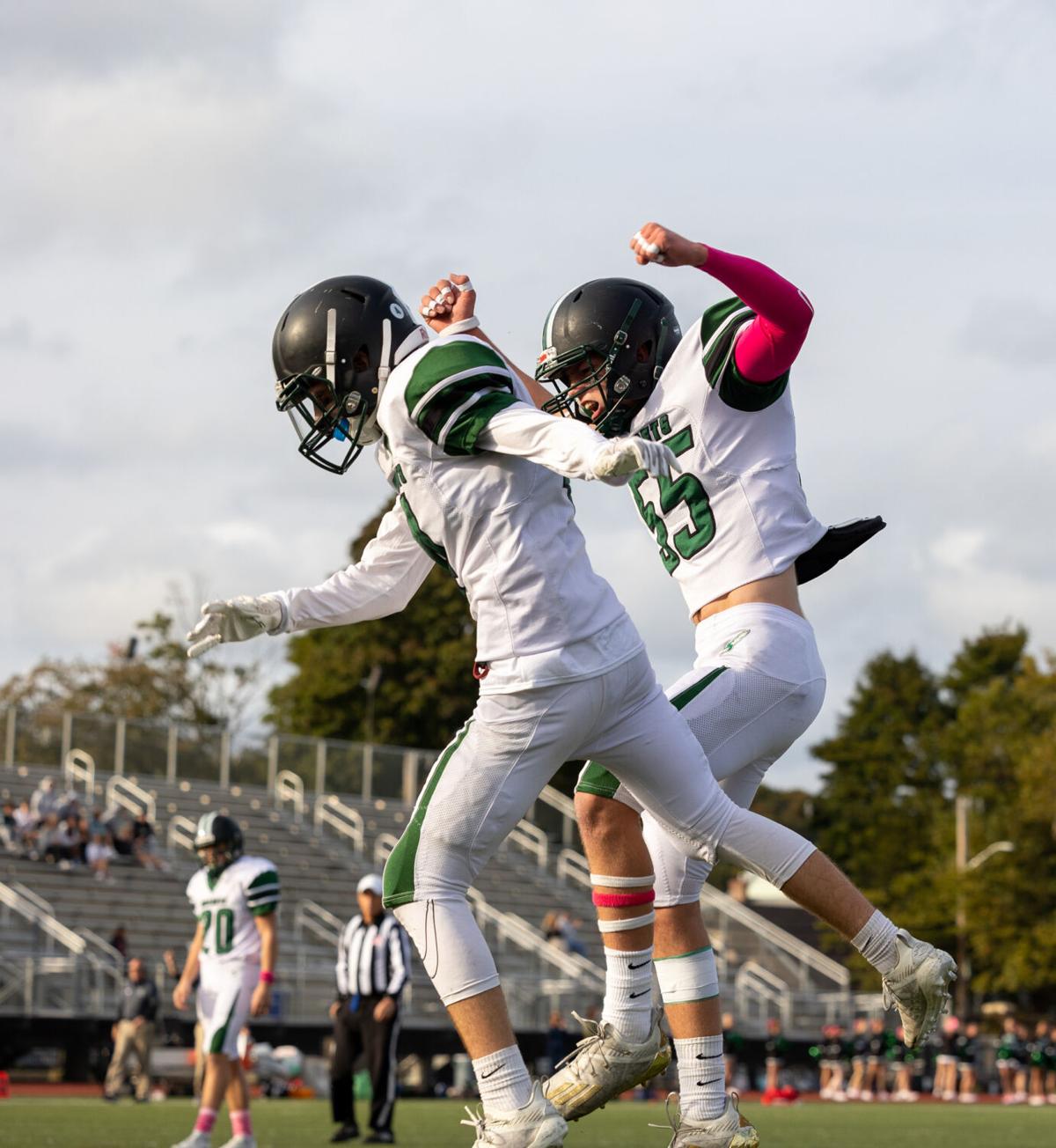 Manchester Essex running back Henry Otterbein hits the edge for a nine-yard touchdown run in the first quarter of Saturday’s win over KIPP at Manning Field.

Manchester Essex’s A.J. Pallazola has put up some big receiving numbers this season.

Luke Smith led Manchester Essex in rushing a week ago as the team put together a season high rushing total.

LYNN- Saturday’s Commonwealth Conference showdown featured a battle of the area’s two most high powered offense with Manchester Essex entering averaging around 37 points per game and KIPP entering the contest averaging over 40 points per game. So, naturally, the game was a low-scoring grind highlighted by big plays from both defense.

When all was said and done, Manchester Essex made a few more plays on both sides of the ball en route to a 15-8 win at Manning Field. The win was a huge one for the Hornets, who remain unbeaten at 5-0 as the new conference rival Panthers tasted defeat for the first time this season, falling to 4-1.

“As a coach these are my favorite kinds of football games, defensive games,” Manchester Essex head coach Joe Grimes said. “It was a great game and this was exactly what we were hoping for. We knew KIPP had a high powered offense and we had a good game plan coming in. These are the games you love to be apart of, two good teams going at it.”

The Hornets defense was the star of the show on Saturday, holding KIPP to a season low point total and season low yardage total (131 yards).

Manchester Essex was all over the KIPP passing attack, pressuring quarterback Juan Setalsingh while forcing two turnovers on interceptions from A.J. Pallazola and Brennan Twombly. A strong KIPP run game was also held in check.

The Hornets defense was led by its defensive ends in Ben Hurd and Troy Flood. The two ends were in the Panthers backfield all afternoon with Hurd recording two sacks and Flood recording one sack. They were also dominant against the run, creating penetration and shutting off KIPP’s edge rushes.

“(Hurd and Flood) really gave them fits up front today,” Grimes said. “Ben is a player we move all around, he’s played some nose guard for us but we moved him outside this week and it worked out really well. (Setalsingh) is a shifty runner and a good passer so we knew we needed to keep him contained and our ends did that.”

The KIPP defense was also up to the task, although the approach was different. The Panthers had a bend but don’t break defense on Saturday as the Hornets moved the ball all afternoon, but could not finish drives as the Panthers forced four turnovers (three interceptions and a fumble), two of them on interceptions from Setalsingh.

KIPP held Manchester Essex to a season low passing total of 78 yards thanks to bracket coverage all game on Pallazola, the team’s top offensive weapon at wide receiver.

Although the Hornets were held to a season low passing total, they finished up with a season-high 249 yards on the ground.

“They were excellent against the pass,” Grimes said. “We tested their pass defense and (KIPP) stepped up. But we had some room in the run game and we showed that we can rely on the run when we need to.”

Luke Smith and Henry Otterbein led the rushing charge with Smith’s 79 yards leading the way and Otterbein right behind him with 70. Otterbein opened up the scoring in the first quarter with a four-yard run around the edge to give his team a 6-0 lead, that score held until late in the third quarter.

The Hornets also got creative with the running attack, which led to its second touchdown as Pallazola took a reverse from left-to-right 19-yards to the house on 3rd and 11 for a 12-0 lead. Manchester Essex also ran two nifty hook-and-ladder plays to Flood, an offensive linemen, that went for 15 and 11 yards, the latter setting up Pallazola’s score and a 12-0 lead.

The Hornets took a 15-0 lead late in the fourth when Cian Brennock knocked down a 20-yard field goal. KIPP responded with its lone score of the day, a nine-yard pass from Setalsingh to Jaythean Im. Setalsingh added the conversion to make it 15-8.

By the time the Panthers scored, however, there was under a minute to play in the game and Manchester Essex recovered the ensuing onside kick to preserve the win.

The Hornets will be looking to make it six in a row on Friday night when Minuteman visits Hyland Field (7 p.m.).