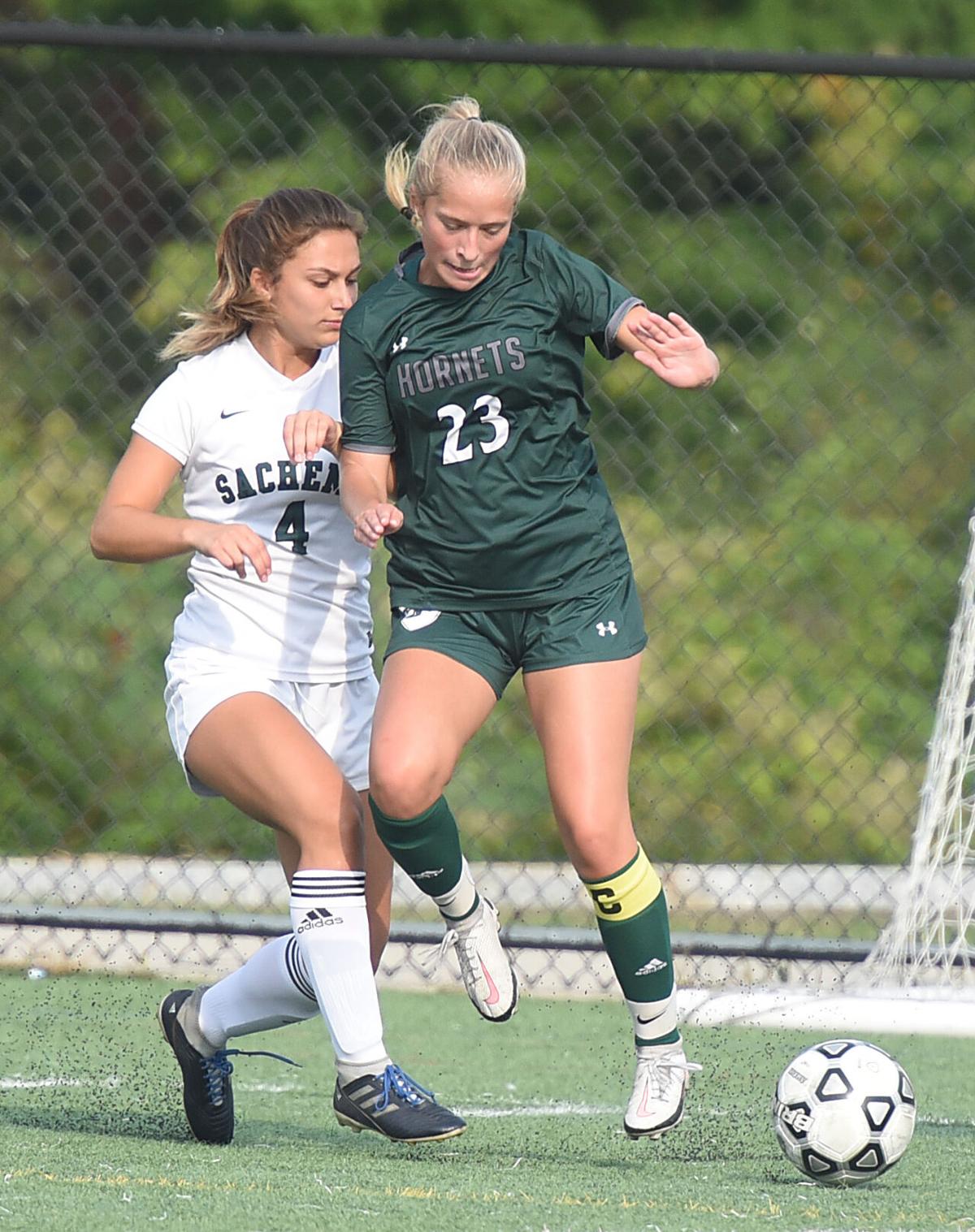 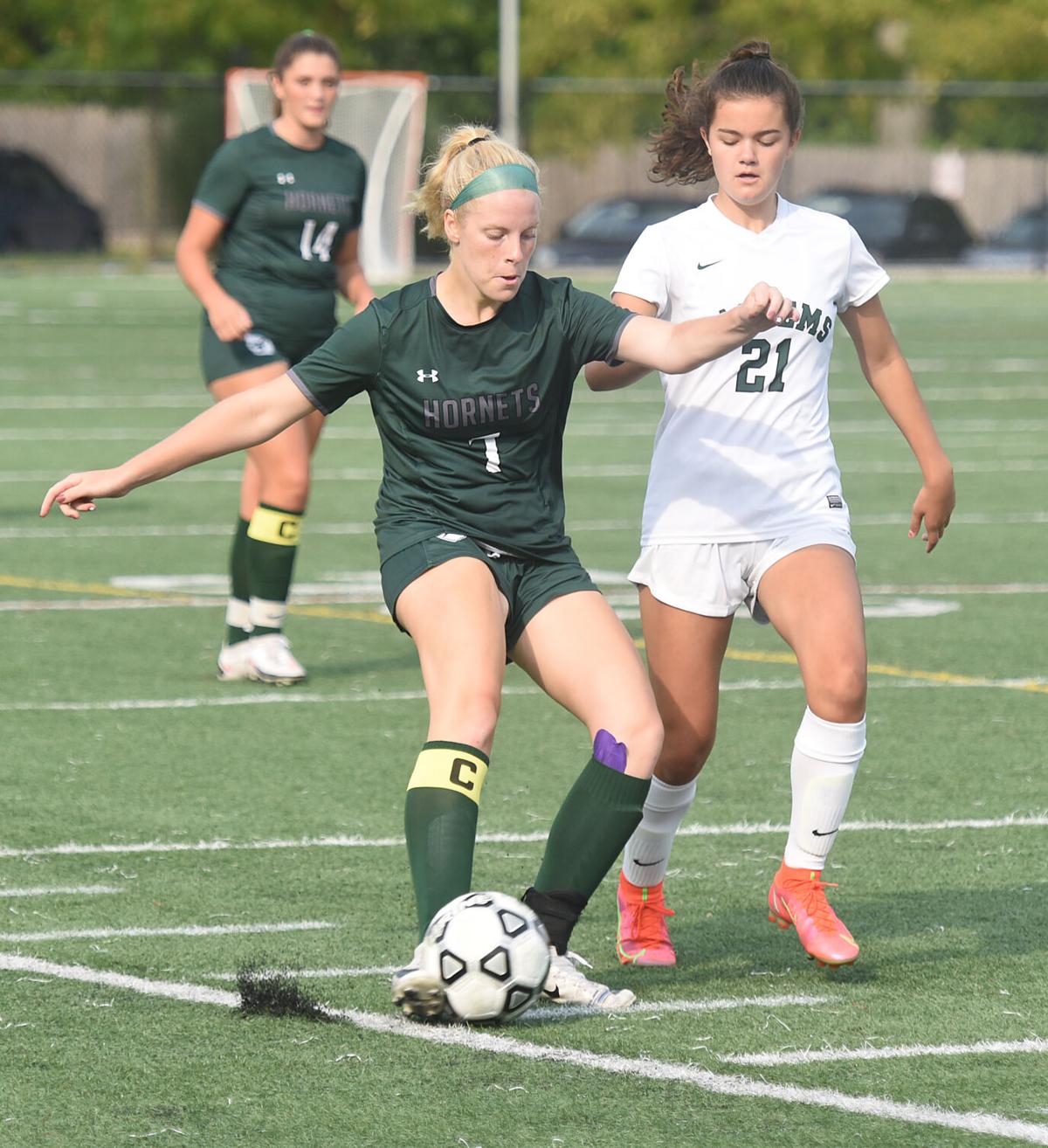 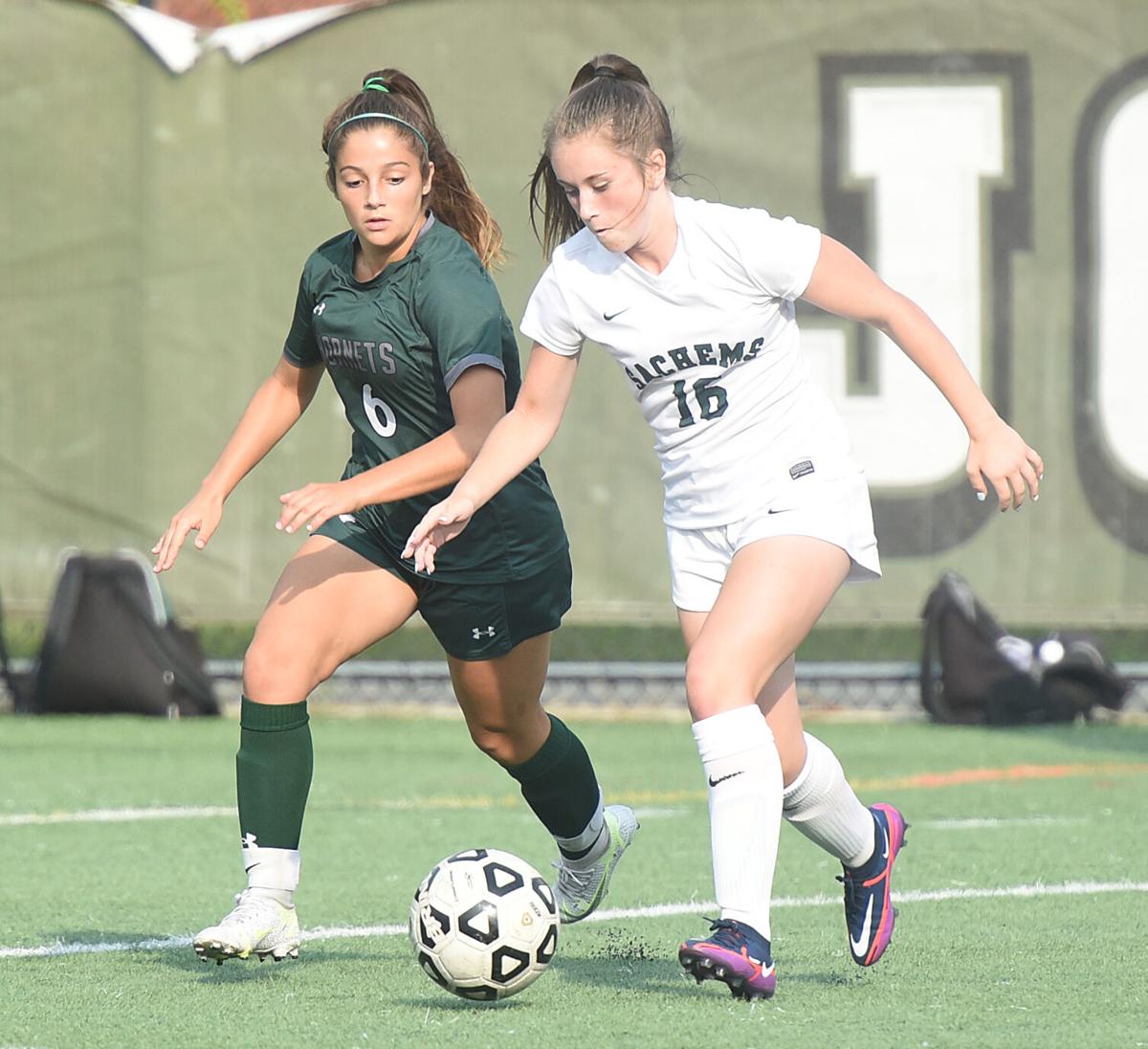 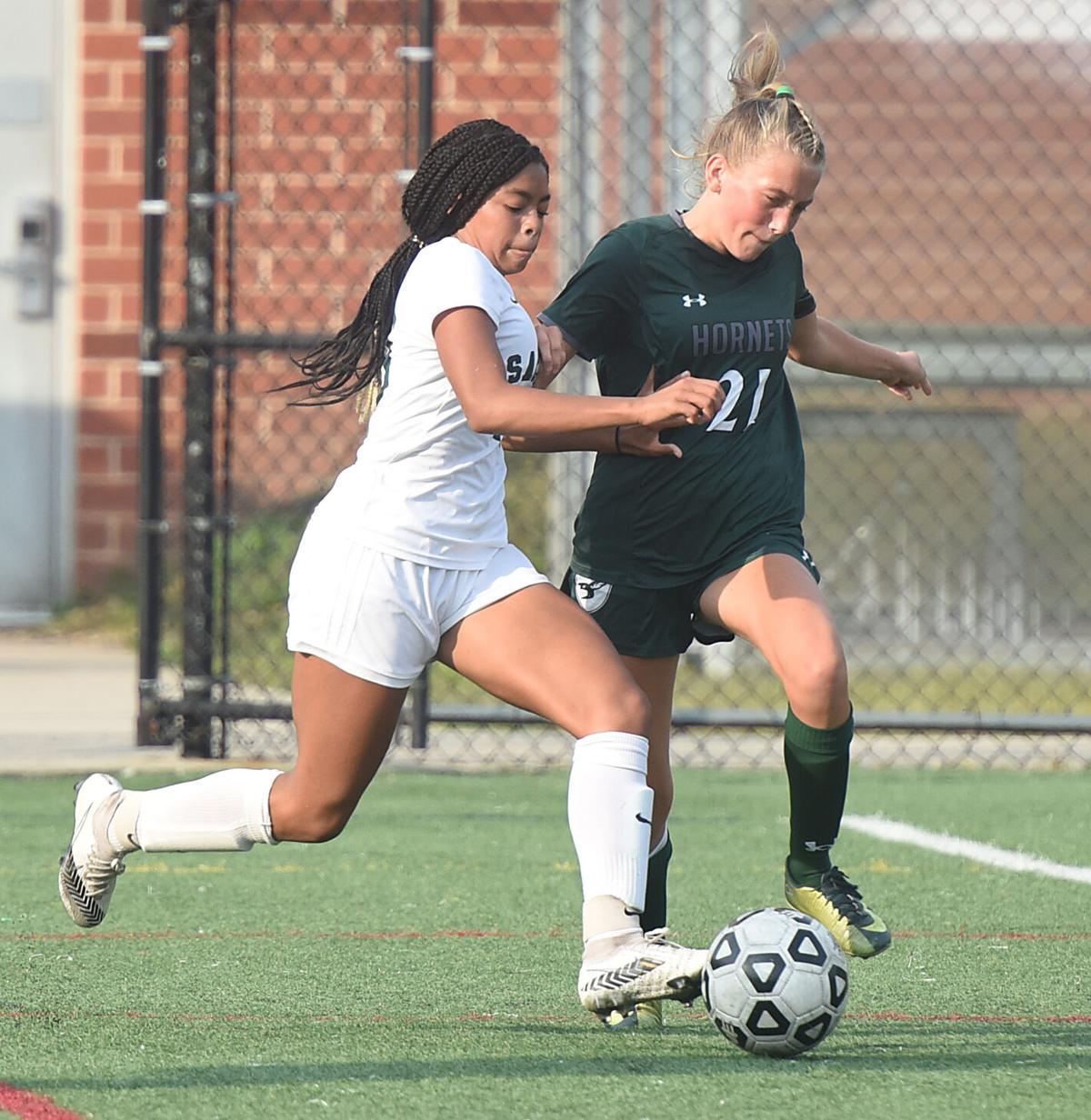 Manchester Essex’s Mackay Brooks tries to take the ball away from Pentucket’s Sabrina Campbell in Wednesday’s game at Hyland Field.

Manchester Essex’s Mackay Brooks tries to take the ball away from Pentucket’s Sabrina Campbell in Wednesday’s game at Hyland Field.

In the early stages of the 2021 season, the Manchester Essex girls soccer team has played an extremely difficult schedule ripe with talented opponents from both inside and outside the Cape Ann League.

Wednesday’s match against Pentucket was another one of those difficult matchups. While the Hornets certainly turned in a valiant effort, and played better as the game went on, the speed and strength of the Sachems was too much to handle.

Thanks to a pair of goals in the opening 20 minutes, Pentucket controlled play for most of the afternoon in a 3-0 win at Hyland Field.

“Pentucket is always a strong team, fast with good ball control,” Hornets head coach Bill Baker said. “It took us a little while to get going and when we did get going in the second half, their defense was really tough to penetrate.”

The Sachems (3-1) were quick to loose balls and outmuscled the younger Hornets to a number of 50/50 balls throughout the course of the afternoon. They got on the scoreboard just eight minutes in when Mollie Cahalane converted a penalty kick after Manchester Essex (1-4) was called for a hand ball in the box.

Pentucket added another just eight minutes later when Jillian Colbert found the back of the net on a fast break in transition.

“Scoring those two goals early was key,” Pentucket head coach Daniel Millard said. “We just wanted to play quick and not give them room to operate and I thought we did that.”

Manchester Essex would settle down from there as Pentucket’s scoring chances were not as frequent over the final 60 minutes.

The score stood at 2-0 at the half and the Hornets came out in the second half by playing their best soccer of the afternoon. While scoring chances were still tough to come by against a stingy Pentucket defense, Manchester Essex picked up the pressure and were on the attack more than it was in the opening 40 minutes. Amelia Donnellan and Parker Brooks led the Hornets defensively while freshman keeper Madi Cook had 11 saves.

“We really didn’t know what to expect from Manchester Essex because they have a lot of new players in the lineup,” Millard said. “We just prepared for them to work really hard all game and that’s what they did. We were a little surprised by what they were able to do in the second half. But our defense was strong and kept them off the scoreboard.”

The Hornets best chance came in the middle of the second half with an open look out front, but the shot went high. Summer Goodwin and Lia Goodwin led the Pentucket defense, disrupting any chances or rushes Manchester Essex had.

Despite the improved play, Pentucket was able to extend the lead on a Sabrina Campbell goal in the 61st minute to make it 3-0.

“I thought we played well in the second half, even controlled play for most of it,” Baker said. “We started to work the ball down the wings better and got a few chances against a good team.”

The Hornets difficult schedule continues on Saturday as they will travel to Billerica (10 a.m.).