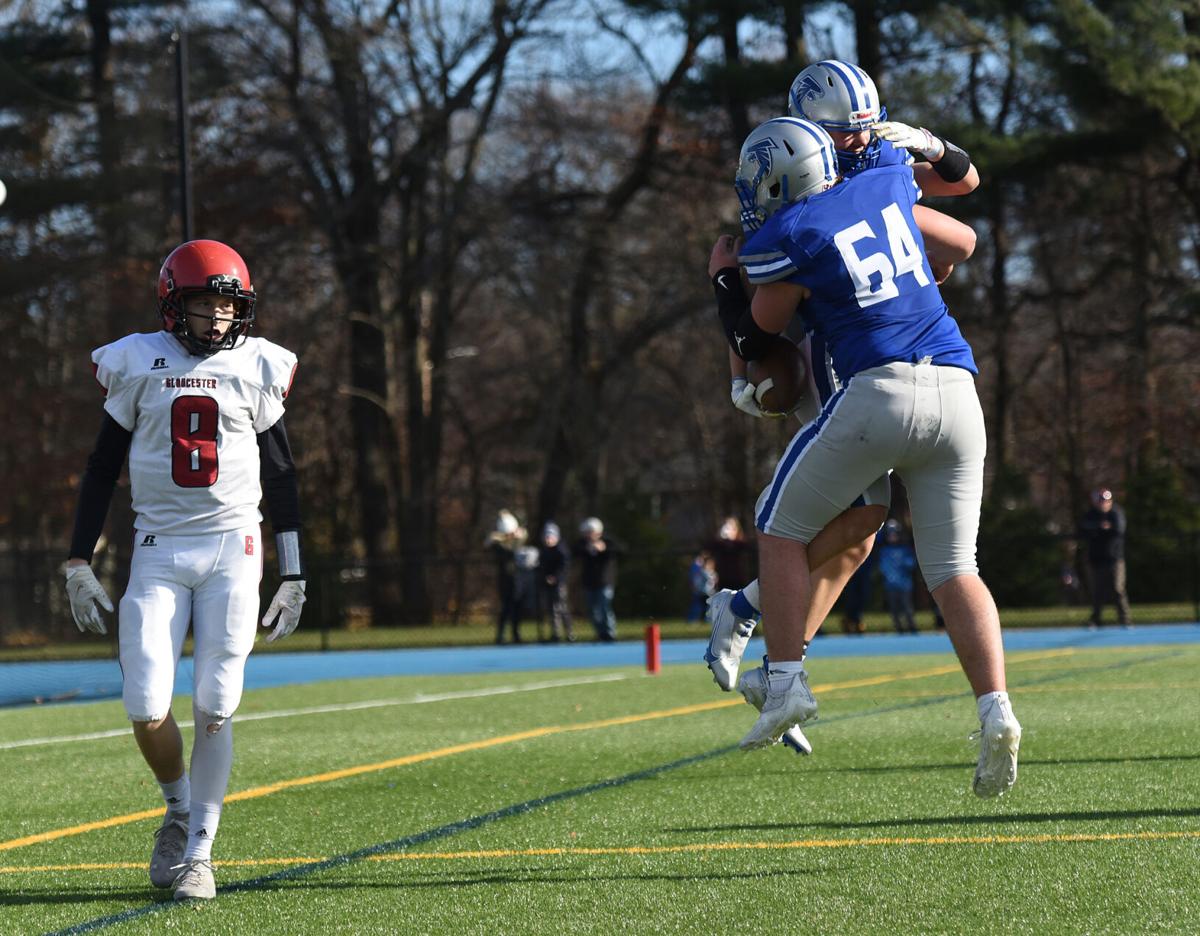 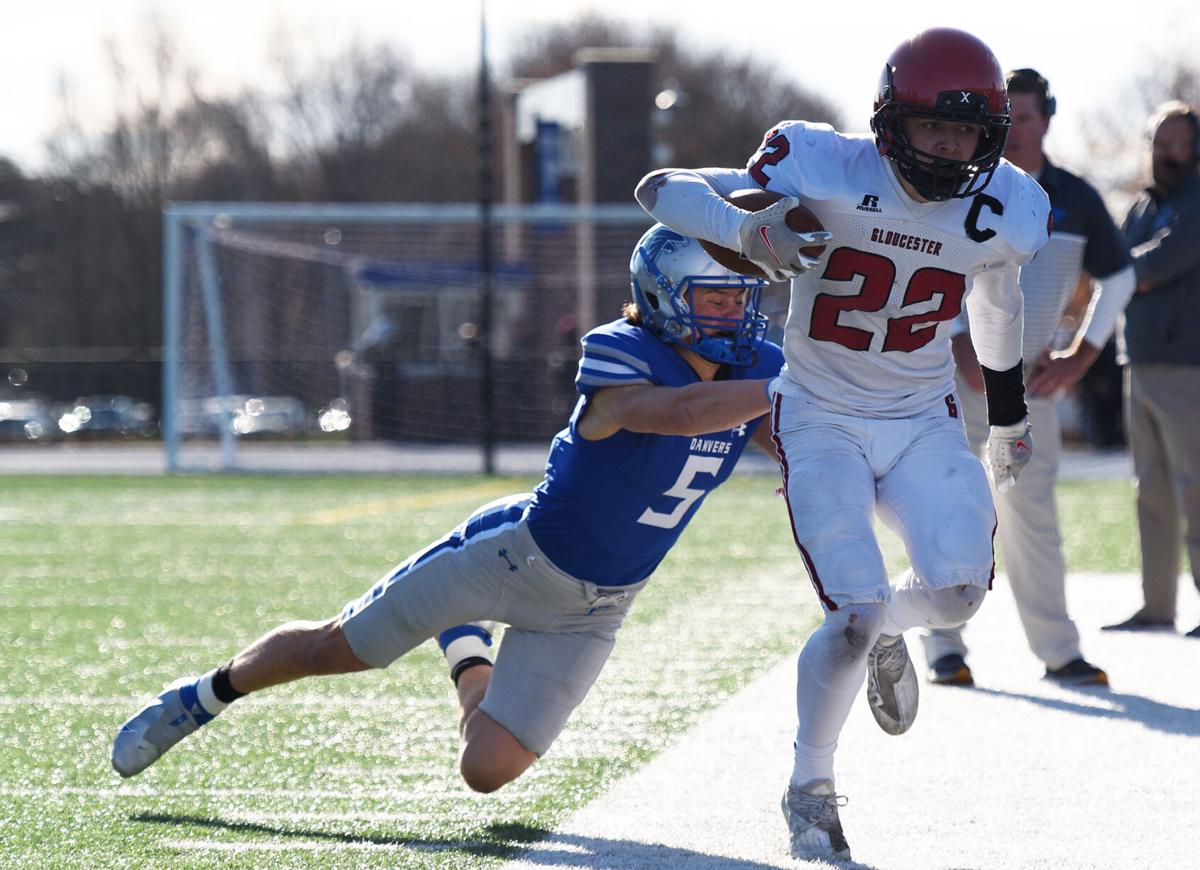 Gloucester’s Frank DeSisto is pushed out of bounds by Danvers’ Owen Gasinowski in Thursday’s Thanksgiving Day game at Deering Stadium. 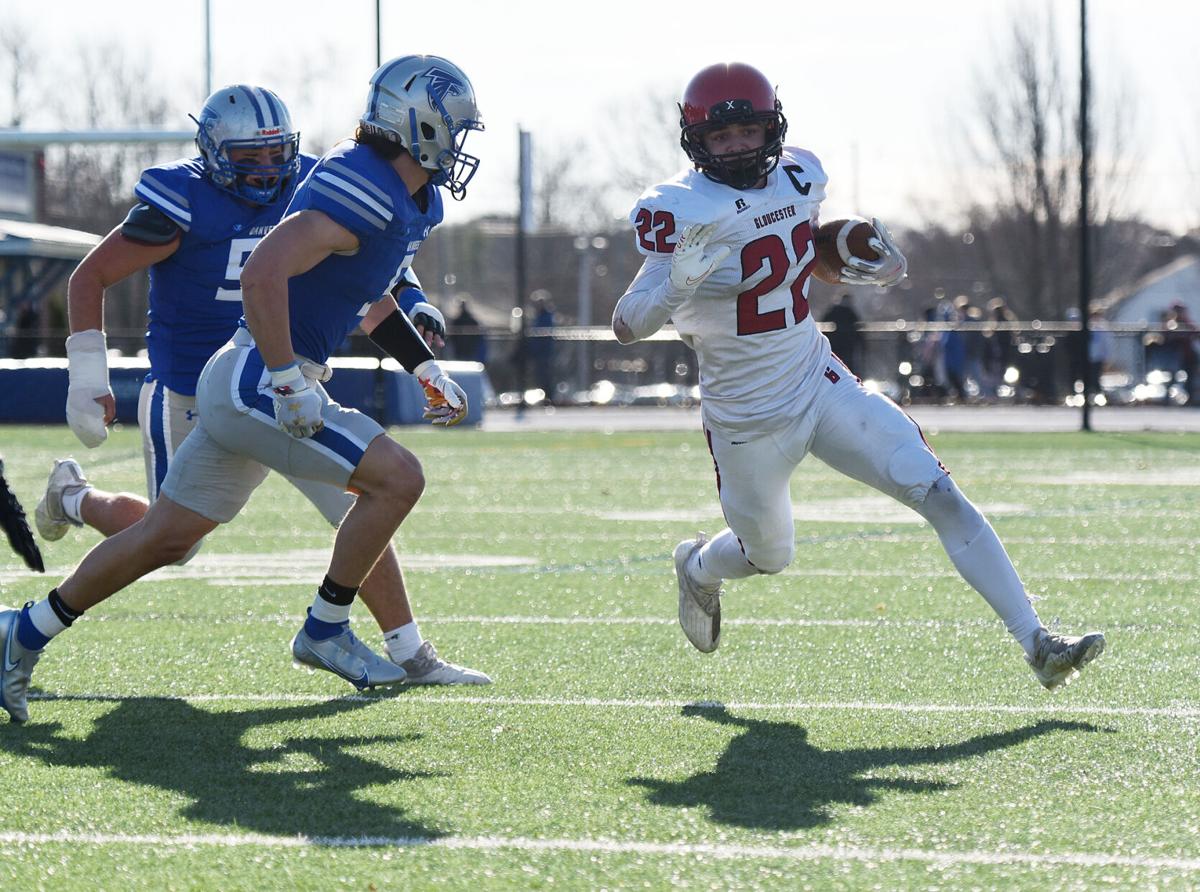 Gloucester’s Frank DeSisto, right, looks to gain the edge as Danvers’ Owen Gasinowski closes in on Thursday at Deering Stadium. 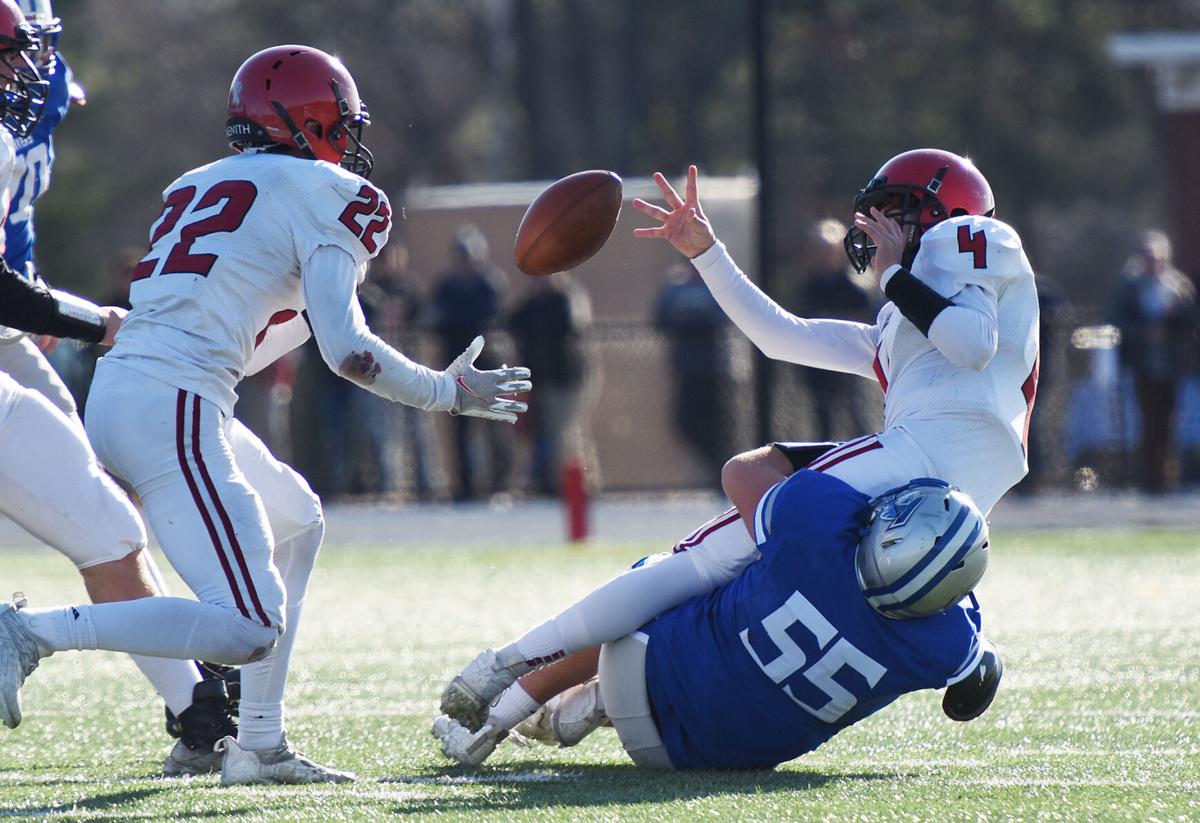 Gloucester quarterback Nicholas Carey, right, the ball off to Frank DeSisto, avoiding the sack by Danvers’ Caleb Raesly in Thursday’s Thanksgiving Day game at Deering Stadium. DeSisto and Carey were able to turn the play into a positive gain. 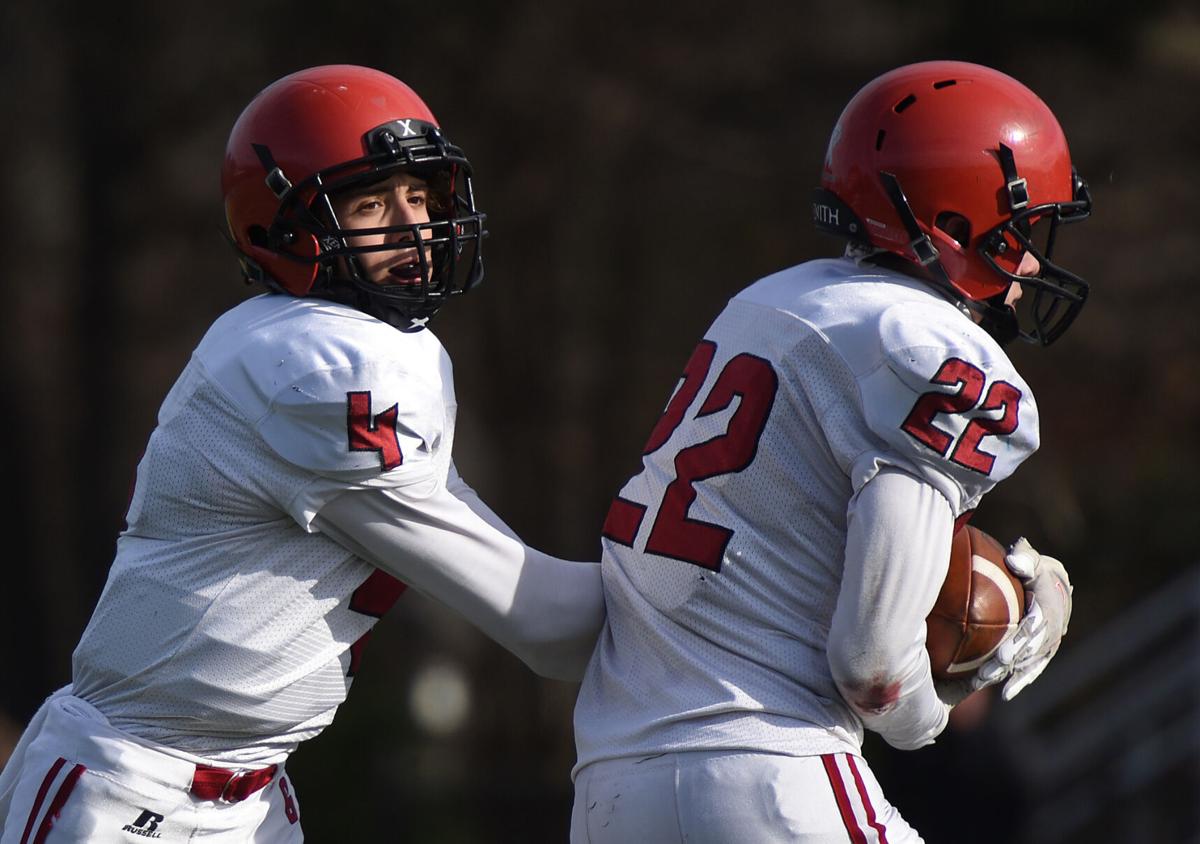 Gloucester’s Nick Carey hands the ball of to Frank DeSisto in Thursday’s game at Deering Stadium.

Gloucester’s Frank DeSisto is pushed out of bounds by Danvers’ Owen Gasinowski in Thursday’s Thanksgiving Day game at Deering Stadium.

Gloucester’s Frank DeSisto, right, looks to gain the edge as Danvers’ Owen Gasinowski closes in on Thursday at Deering Stadium.

Gloucester quarterback Nicholas Carey, right, the ball off to Frank DeSisto, avoiding the sack by Danvers’ Caleb Raesly in Thursday’s Thanksgiving Day game at Deering Stadium. DeSisto and Carey were able to turn the play into a positive gain.

Gloucester’s Nick Carey hands the ball of to Frank DeSisto in Thursday’s game at Deering Stadium.

DANVERS — The Danvers football team did something the program has never done before in its 35-0 win over Gloucester on Thanksgiving morning at Deering Stadium.

The host Falcons have had control of the series against the Fishermen in recent years as Thursday’s win was their third straight win on Thanksgiving morning and fourth straight win overall as the teams met in the 2021 “Fall 2” season last school year. The win marks the first time Danvers has beaten Gloucester on the gridiron four times in a row. It last won three straight Thanksgiving Day games from 1971-73.

“I think things go in cycles and we’ve had the upper hand in recent years,” said Falcons head coach Ryan Nolan, whose team finishes up at 5-6. “We played well today, we made plays and played well on the line. Gloucester played hard the whole game too, we just got a strong effort across the board.”

The Falcons established their dominance from the start in the first Thanksgiving Game since 2019 with a balanced attack that saw both senior captain Colin Kelter and sophomore Owen Gasinowski make plays on the ground and through the air. Kelter led the Falcons in both rushing and receiving with five carries for 60 yards and a score on the ground, and two receptions for 50 yards and a score through the air. Gasinowski, on the other hand, had eight carries for 56 yards and two scores on the ground and two grabs for 41 yards.

Gasinowski got things started as he hauled in a 34-yard pass on a nice 4th-and-7 throw from quarterback Travis Voisine to set up a two-yard touchdown from senior Dominic Baez to make it 7-0.

Kelter delivered the next two Falcons touchdowns as he hauled in a 47-yard pass from Voisine on the ensuing drive to make it 14-0, where it stood after one quarter of play. Early in the second, Kelter took a jet sweep untouched around the left end for a 36-yard strike to make it 21-0.

“We came out flying and ready to go,” Kelter said. “This season didn’t go the way we wanted it to so this game meant everything to us. The blocking was good all game and the quarterbacks were giving us chances to make plays.”

Gasinowski found the end zone on a 13-yard run late in the first half to make it 28-0. Danvers thought it had more points just before the half with Voisine hitting Kelter for a touchdown with no time left in the half, but the play was called back on a pass interference penalty keeping it 28-0 at the half.

Danvers added to that lead on its first drive of the second half, which Gasinowski finished off with a 16-yard run to make it 35-0.

Danvers’ play up front drew praise from Gloucester head coach Dan O’Connor, who is hoping his young offensive line can eventually mold itself into that kind of unit.

“That’s a big, tough line and we’re young and inexperienced at that position,” said O’Connor, whose team finishes up at 2-9. “They run tough and they block hard all game. But that shows us that we have to get bigger and stronger this offseason. The line got better as the year went on and we are looking to have more experience and continuity there in the future with just about everyone back.”

Offensively, the Fishermen struggled to get anything going all morning.

Danvers shut down the run game completely, allowing just 31 yards on the ground. While junior quarterback Nick Carey played well for the Fishermen, Danvers tackled well in the secondary as well allowing only 81 yards on 14 completions through the air.

Gloucester’s best drive came late in the third, where Carey found Robbie Schuster and Aidan Cornetta for nice gains, but the drive stalled out just outside the red zone and Danvers preserved the shutout.

Michael Toppan and Jayden Toppan both had good games on the offensive and defensive lines for Gloucester with Michael blocking well and Jayden recovering a fumble and making a tackle for loss at defensive tackle.

For the Fishermen, a tough season comes to an end. While the team took its lumps, O’Connor is hoping the experience pays off next season as the team graduates only five players.

“We have a lot of young kids that went out there and played hard,” O’Connor said. “They started to understand the system more and more as the season went on and they’ll be better for it next year.”