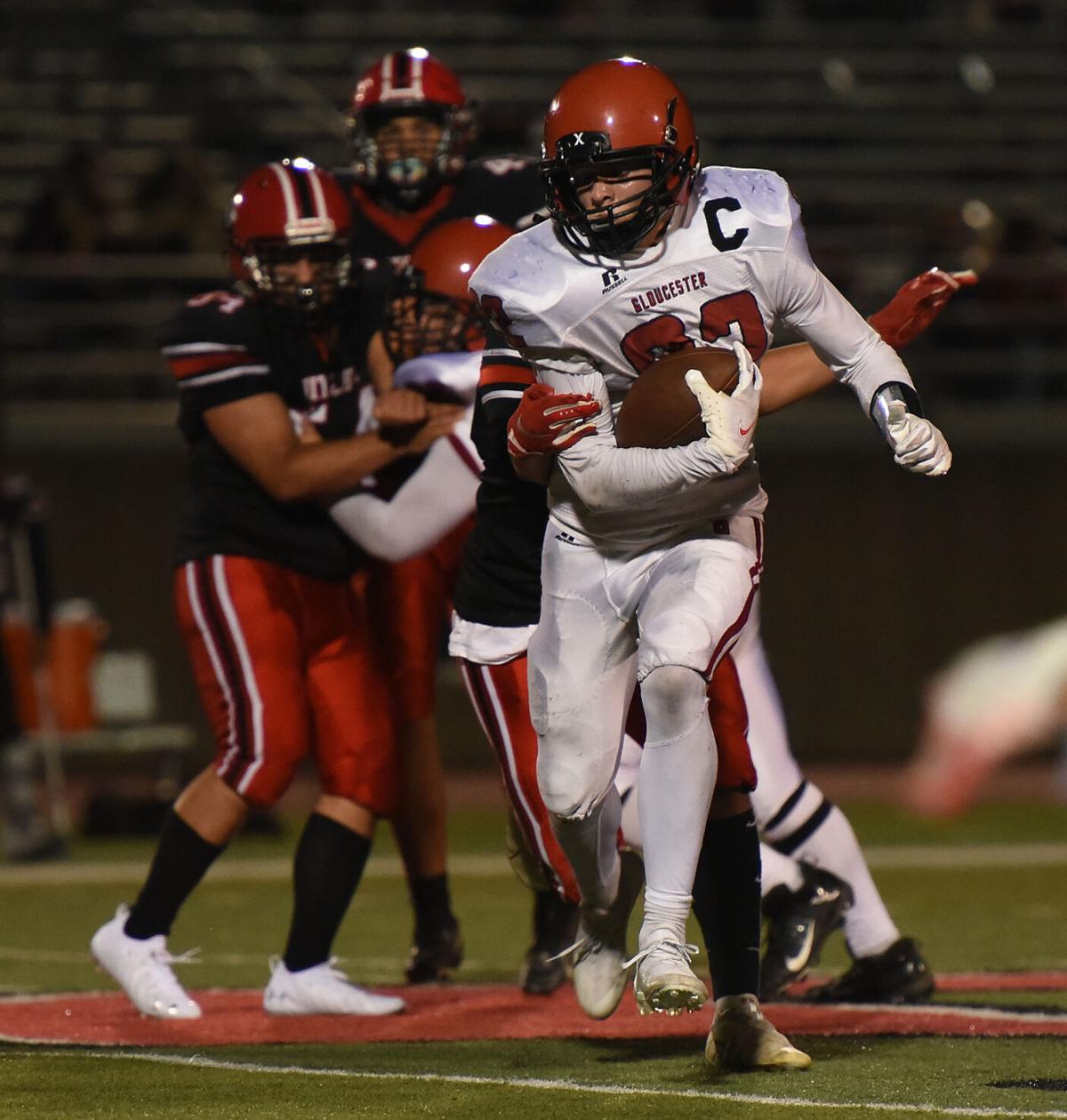 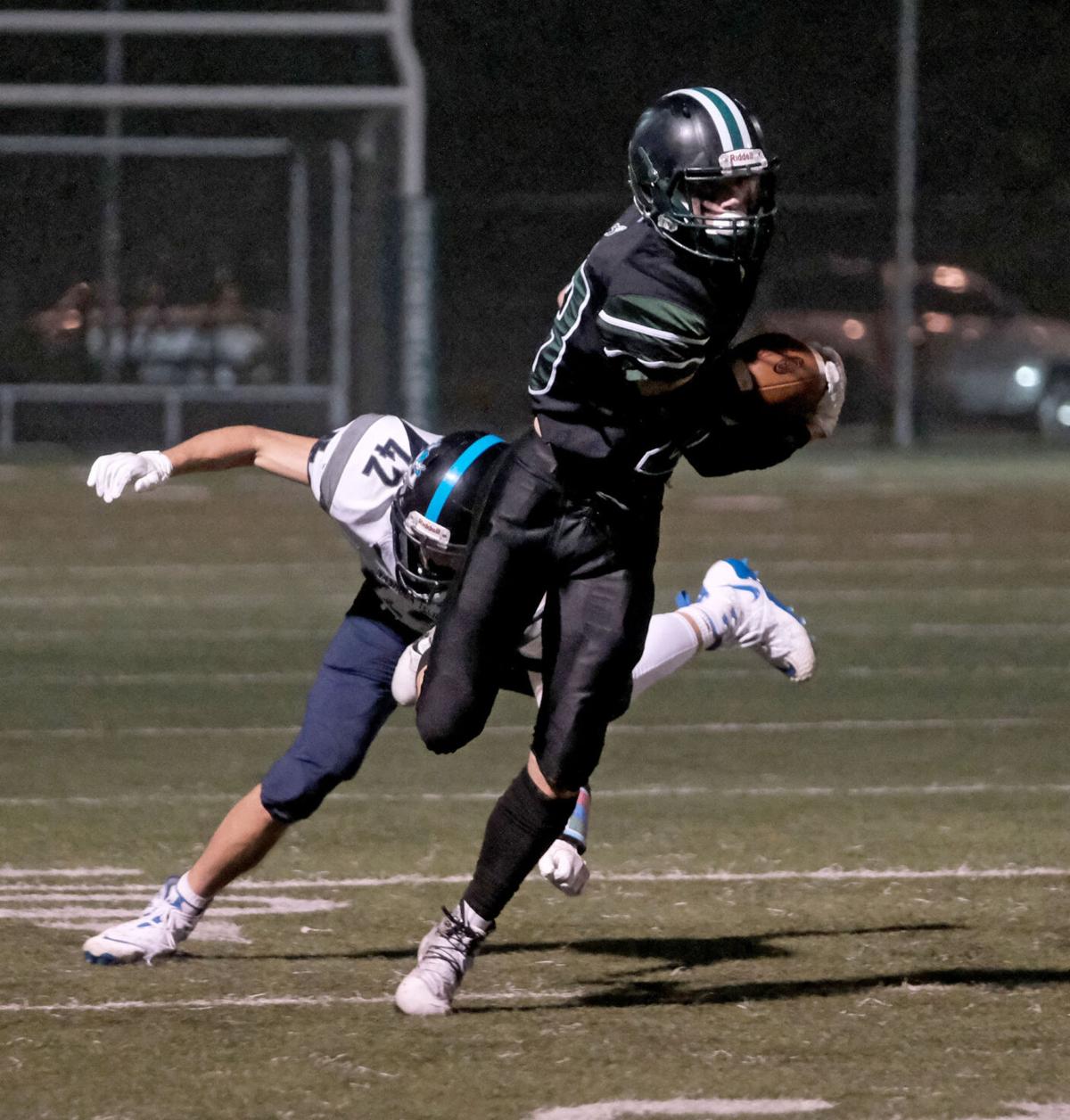 Camren Hubbard and the Hornets take on KIPP in a battle of unbeaten teams on Saturday.

Camren Hubbard and the Hornets take on KIPP in a battle of unbeaten teams on Saturday.

The second half of the 2021 high school football regular season begins this week.

With the MIAA releasing its football playoff power rankings, both the Fishermen and Hornets know where they stand in the playoff picture with four regular season weeks to go.

Manchester Essex is in a great spot heading into Saturday’s potential Division 8 State Tournament preview at Manning Field against KIPP (4 p.m.), a battle of 4-0 teams. The football rankings debuted earlier this week and the Hornets are ranked No. 4 in Division 8, comfortably in the top 16, which is the cut line for the playoff field. KIPP is right behind Manchester Essex at No. 5 so this is a huge matchup for Commonwealth Conference standings and Division 8 State Tournament standings.

Gloucester, on the other hand, is ranked No. 32 out of 37 teams in Division 5 after a tough, 0-4 start. The Fishermen would have to run the table to have any chance at contending, and even that is no guarantee. Gloucester will be looking for its first win of the season when it travels to Miller Field in Winthrop for the first time since 2010 (the teams played at East Boston Stadium in 2016). At No. 14 in Division 6, Winthrop needs a win to stay within the top 16.

When Gloucester has the ball: The Fishermen had their toughest loss of the season a week ago, a 15-6 setback at Salem. But in the loss, Gloucester put up a season high in yards from scrimmage (250). The team finally got a little something going in the run game with Frank DeSisto running on the edge and Caleb DeCoste running in between the tackles with some effective passing sprinkled in as well.

The downfall for the offense, however, has been turnovers. The Fishermen have turned it over six times in the last two games. Four turnovers in the first half of a Week 3 loss to Swampscott put them out of it before they could even get going and a pair of first half turnovers in Salem territory a week ago may have cost them the game.

On defense, Winthrop is coming off of a 42-0 pounding at the hands of Danvers a week ago in a game where the Falcons scored 35 points in the first half. Danvers physically dominated that contest and Gloucester will need to do the same this week. The Vikings defense has been up and down so far this season with a strong performance in a win over Austin Prep, where an interception run back for a score was the difference, and a 10-8 loss to Medway. But in losses to Danvers and Stoneham, Winthrop allowed a combined 72 points.

When Winthrop has the ball: The Vikings were off to a solid start to the season offensively until being completely shut down a week ago by Danvers.

Winthrop is a run first team out of a tight formation with Cam Martin leading the way and Welvis Acosta and Evan Rockefeller performing well in complementary roles. Quarterback Robert Noonan is not asked to throw a ton but he can also factor into the run game.

This matchup pits strength vs. strength as Gloucester has been stout against the run for the most part this season. Salem’s passing game set up its points a week ago as the Fishermen shut down the run game. Expect a physical matchup when the Gloucester defense squares off against the Winthrop offense.

Outlook: Both teams are looking to bounce back after rough losses a week ago and the best way to put those performances in the rear view mirror is a big bounce back win. Expect two hungry teams going at it on the road Friday to build some momentum in the second half of the season. The key for Gloucester will be finishing off its drives. The Fishermen have proven that they can move the football, and that they are formidable on defense, but have not been able to find the end zone with regularity.

If Gloucester can have a clean game from a turnover standpoint then it will be right in the game until the end, just like last season. But the Fishermen will have to score when they’re in position to do so as they can not afford to give away any points or possessions in a tough road environment.

When Manchester Essex has the ball: The Hornets are on fire offensively through four weeks, averaging 37 points per game.

KIPP should expect a balanced attack where a big play passing attack sets up a versatile run game that features several different backs. A big development for the Hornets in recent weeks has been the emergence of Camren Hubbard at running back. Hubbard was banged up a bit through the first three weeks but got to show off his big play ability in an increased role in last week’s win over Cathedral. Adding a potent running back to the passing game combination of quarterback Brennan Twombly and receiver A.J. Pallazola makes the Hornets even more dangerous on that side of the ball.

Defensively KIPP has been strong in the early going, allowing just 52 points in four games. The Panthers had allowed just 12 points through three weeks until last week, where it won a 49-40 shootout over Whittier Tech.

KIPP runs a spread offense with a balanced attack. Quarterback Juan Setalsingh has been a do everything player for KIPP as he is a running and passing threat. He had four rushing touchdowns and a touchdown pass last week against Whitter. The Hornets will have to contain KIPP’s signal caller in this one.

Jaythean Im is the Panther’s most dynamic player in the passing game while Piero Canales can spell Setalsingh in the run game.

Defensively, Manchester Essex has been very good all season long, allowing just two meaningless fourth quarter touchdowns a week ago in a rout of Cathedral. The Hornets can get physical against the run and have the athletes to cover the pass.

Outlook: Expect fire works from this game with two high powered and highly talented offenses going at it. There are standout athletes all over the field in this one so that means the game will come down to which team wins the physical battle. The Hornets have played in two physical, grinding games this season in wins over Ipswich and Lynn Tech. Those two games could help them dig deep in the fourth quarter against an opponent that can match their talent.

High scoring or not, expect this one to be settled in the final quarter of play.